Mosquitoes infected with the West Nile virus have been detected in the Jewish community of Beit Aryeh in Samaria, according to the Health Ministry.

The disease was discovered in routine testing carried out by the Environmental Protection Ministry’s Department of Pests and Pesticides.


The primary hosts of WNV are birds; the virus remains within a “bird–mosquito–bird” transmission cycle. Since the first North American cases were reported in 1999, the virus has been reported throughout the United States, Canada, Mexico, the Caribbean, and Central America. Both the American and Israeli strains are marked by high mortality rates in infected avian populations.

This is not the first case of West Nile virus-infected mosquitoes found in Israel this year. Diseased mosquitoes were also found about a week ago in the Arava, in Moshav Idan. 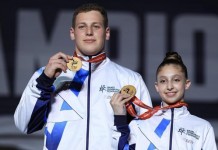