On Wednesday, Prime Minister Benjamin Netanyahu offered Yamina chairman Naftali Bennett immediate senior membership in the Likud party in exchange for recommending Netanyahu as PM to the President next week. Netanyahu’s proposal includes reserving seven slots for Yamina members in the Likud slate’s first 37 slots in the next two elections, regardless of when said elections would be held. In addition, Bennett was offered representation in the same proportions in the Likud Center and among party members – about 17% of the entire party.

That’s a gigantic offer, and to make good on it, Netanyahu met this week with Likud Center chairman Haim Katz to obtain his consent to the move. If you needed proof that Netanyahu is in a panic, this is a pretty solid one.


For years, Bennett and Ayelet Shaked were dying to join the Likud leadership. In fact, their departure to forge Habayit Hayehudi, the descendant of the historic National Religious Party (Mafdal) in 2013 was because they were being blocked, erased, really, by Netanyahu, after they had run his 2009 campaign that finally returned him the prime minister’s office.

The prime minister now hopes that his proposal would stop Bennett from joining the opposition bloc against Netanyahu, and help Netanyahu form a government, even though for the time being he does not have Smotrich’s Religious Zionism’s support for a government that relies on the Islamic party Ra’am.

Bennett supporters especially liked the part where Netanyahu publicly promised that Bennett and Shaked would be the first he would call to discuss the formation of his next government. As you may recall, Bennett and Shaked were the last politicians Netanyahu called when he was forming his current government, after turning over both their portfolios—Defense and Justice—to Benny Gantz. Yamina was offered the least important crumbs from Rebbe Bibi’s table, at which point they decided to wait him out in the opposition. Now, it appears, these two battle-weary dogs are having their day.

Netanyahu’s brief statement on Wednesday was full of half-truths (to use clean language): “The people have had their say clearly,” he stated, “They gave 65 seats to right-wing parties.”

Yes, most of the people did vote for right-wing parties, but these included Saar’s New Hope and Bennett’s Yamina, two parties that promised to replace Netanyahu.

“Let us put all the sediment behind us and create a stable, right-wing government,” Netanyahu suggested to his two opponents, both of whom he had attempted to delete from the political map, after using them as his most loyal allies. He used against them the same warm persuasion attempts that he tried in the past three campaigns with another ally who abandoned Netanyahu – Israel Beiteinu chairman Avigdor Lieberman.

Haaretz pundit Yossi Verter compared Netanyahu to a real estate agent trying to sell the same plot of land in the middle of the ocean for the thousandth time, to the same customers.

Saar’s response was swift and blunt: “On the day he and his men once again spread bizarre and false conspiracy theories against me and the president, Netanyahu turns to me to join him,” he tweeted. Saar suggested that the Likud replace its leader, saying that he would be happy to support a Likud government led by Israel Katz, Yuli Edelstein, or Nir Barkat. “If Netanyahu prefers the interests of the state over his personal interests, he will leave and allow the country to move forward,” Saar advised.

Bennett’s response, using the Yamina spokesperson (he is on Passover holiday in the desert with his family), was less blatant: “Naftali Bennett cares about citizens, not reserving seats. Bennett will continue to make every effort to form a good and stable government.”

The radical change in Netanyahu’s strategy apparently happened due to President Reuven Rivlin’s statement Wednesday morning, that he would give the mandate to form a government to the candidate most likely to succeed in the mission. This implied that Rivlin would not necessarily grant the mandate to the candidate with the largest number of endorsements.

The Likud’s response to the president’s remarks was fast and furious, coming from Knesset Speaker Yariv Levin and Ministers Yuval Steinitz, Amir Ohana, and Miri Regev. They protested loudly, claiming that “the president does not determine the election results. He must not be a political actor.”

Another thing that raises concerns in the Likud is the assessment that after President Rivlin assigns the task to the first candidate – Yesh Atid chairman Yair Lapid, who would probably win more recommendations than Netanyahu – and Lapid fails, Rivlin might roll the responsibility for forming the next government to the Knesset, instead of giving the mandate to Netanyahu. In such a situation, Netanyahu may find himself in a dangerous, existential quagmire, where pressure will be exerted on Lapid to give up the role of prime minister in the first phase of a rotation government to Naftali Bennett.

Bennett, for his part, is under enormous pressure from the right not to cooperate with any government other than the one headed by Netanyahu. But the Yamina chairman has yet to declare publicly where he is headed. Some in Israel’s political media suggest that if Lapid were to offer Bennett to be the first PM in a rotation agreement, Bennett would grab it, and effectively end Netanyahu’s career. A Bennett-Lapid coalition government will Netanyahu’s trial coming close to a decision, and the expectation is he will not get away completely unscathed from his three criminal indictments.

Meanwhile, officials in the New Hope Party are exerting political pressure on Lapid to relinquish the prime minister’s job to Bennett. They threaten that if Lapid does not announce the move in the coming week, Bennett would be forced to join the Netanyahu-led government due to public pressure.

“If Lapid does not announce in the coming week that he is surrendering the post of prime minister to Bennett, Bennett will no longer be able to withstand the criticism he is currently getting from the right and will announce that he is going with Netanyahu,” those Saar officials told Reshet Bet radio. According to them, the window of opportunity for the formation of a government to Netanyahu is between one and two weeks.

Former Labor Justice Minister Haim Ramon told 103FM Radio on Thursday that a Lapid-Bennett government would be a “shatnez government that won’t last a day or two.” Shatnez is a fabric that combines materials from animals and plants and is prohibited by Jewish law.

“Bennett will switch and support Netanyahu, and despite everything that Ben Gvir and Smotrich say, the right will accept the support of Mansour Abbas.” Abbas is the chairman of Ra’am, an Islamist party that abandoned the Joint Arab List and declared that it is open for negotiations with both Netanyahu and Lapid and would join either for the right price. However, since its nemesis the Joint Arab List is expected to support Lapid, Ra’am is more likely to go with Netanyahu so that whatever benefits are won for the Arab community in that marriage would go on Abbas’s record only.

Ramon added that “all the political parties expect that there will be a fifth election.”

Finally, perhaps Naftali Bennett should be warned that New Israel Fund CEO Mickey Gitzin supports his becoming the next PM of a right-to-left coalition party that includes Bennett, Sa’ar, Liberman, and Lapid. Gitzin tweeted on Wednesday: “Bennett is better than Netanyahu if you can put it that way, for two reasons: A. Netanyahu’s power and control mechanism. An unstoppable and boundless system has been created there, it takes time to build such systems. Bennett will not have such a system; and B. The coalition that will be formed (and I don’t believe it will be formed) will limit Bennett greatly, it will be a move intended to get Netanyahu out and that’s it.”

Gitzin is probably right. No one really wants Bennett on the left, and should he go there they’ll find ways of letting him know. 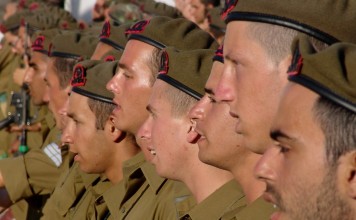