The franchise will take over the two restaurants from Burger Ranch, which continues its current operation of the food stands until October 31.

In response to the announcement that Israel had ignored the letters, Beit El Council leader Shai Alon announced in a statement, “Brothers and sisters, I guess we’re not part of the tribe. I was sorry to hear that the company boycotted by hundreds of thousands of Jews living in Judea and Samaria today won a tender to operate outlets at the entrance to the State of Israel by the Israel Airports Authority.

“I am sorry that precisely in the place that is the door to our country, there are those who legitimize a company who refuses to open branches in Judea and Samaria on political grounds. I call upon all residents living in all of Israel, and Judea and Samaria in particular, not to buy from companies that boycott Jews wherever they may be.”

The winning bid by McDonald’s Israel was NIS 17 million ($4.69 million), in response to the demand by the Israel Airports Authority for a minimum NIS 7 million ($1.93 million) bid for the operating permit. Burger King and Burger Ranch also submitted bids exceeding the minimum as well, but both were lower than that of McDonald’s. 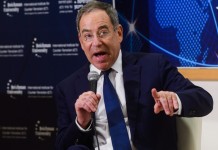 After Pressuring Israel, Ambassador Nides Visits Allenby Crossing to Jordan to Make Sure Israel Is Operating It 24/7