Three months after saving a boy’s life at his magic show, Magician Aharon Avital celebrated the boy’s birthday by finishing the show that was cut short due to the emergency.

Aharon Avital, a magician who lives in Elad and works most of the time in the city of Hod Hasharon, performing live magic shows under the stage name Aharon HaKosem (Aharon the Magician), also volunteers as an EMT with United Hatzalah and carries his medical kit with him wherever he goes.


Back in July, Aharon was invited to perform at a birthday party in Ra’anana. During the performance, he noticed that one of the children in the crowd was choking. Aharon quickly intervened and saved the child’s life.

“I saw the boy start to turn blue and I noticed that he was not able to breathe and grabbed his throat. I was in the middle of my performance, but I didn’t hesitate at all. I dropped the act and rushed over to the boy,” Aharon said.

Aharon was at the boy’s side in seconds and told one of the parents to go to his car and bring his medical kit. “One of the other children told me that the boy had been eating popcorn and suddenly stopped breathing,” Aharon recalled. “I began to perform the Heimlich maneuver and thankfully the boy began breathing again and returned to his normal color. A few minutes later, an ambulance showed up and took the boy to the hospital for further treatment. He was hospitalized for a few days just to make sure that everything was okay. It was a birthday party I won’t soon forget.”

Last week, the boy, Adam, celebrated his own 11th birthday. Aharon surprised him at the birthday party to finish the show that he ended abruptly three-and-a-half months earlier.

“Aharon is simply an angel,” said Afnan Nagar, Adam’s mother. “God sent him to bring Adam back to us. It is no small thing that Adam has made it to his 11th birthday. When he was younger he underwent three open-heart-surgeries and is surviving with only half of his heart working. Thanks to Aharon Hakosem, we can celebrate Adam’s 11th birthday.”

“I can’t believe that Aharon came to celebrate my birthday with me,” Adam said. “He saved my life. He is a special person.”

President and Founder of United Hatzalah Eli Beer said, “Aharon’s rescue of Adam is a perfect example of how a person can combine being a self-employed professional with being a first responder. We are very proud of him.” 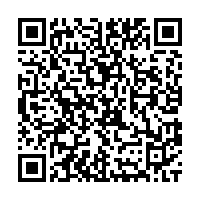