Is it possible that an entire sector of Israel’s April 9th, 2019 vote has been falsified? This appears to be the case. MK David Bitan (Likud) on Monday morning told Reshet Bet radio that he had passed on to the chairman of the elections committee, Justice Hanan Melcer, a portion of the material collected regarding suspicions of ballot stuffing at polling stations in Arab communities. Bitan repeated the Likud’s plan to pass a law requiring cameras at the polls.

Melcer has already decided to request an investigation. On Sunday, he approached Attorney General Avihai Mandelblit and the police regarding a criminal probe into suspected fraud at several polling stations, the vast majority of which are in Arab and Druze communities.


Over the weekend, Maariv published its own investigation of dozens of testimonies exposing fraud and corruption at polling stations in Arab-Israeli society. It presented a picture of broad ballot stuffing and vote buying by the heads of polling stations, who handed out dozens of envelopes to single voters, with the excuse that they represented many of their relatives who hadn’t come to vote.

In the radio interview, Bitan said: “We wanted to disqualify the results in some of the polling stations, but we respect Judge Melcer’s decision to take this to a police investigation.” Bitan added: “In the polling stations where we had representatives, the turnout was not high, it was normal. In places where we did not have representatives and it took us time to bring them in, the turnout was high.”

“We only passed a sample of our materials,” he noted. “In one of the tapes, a representative of the Arab sector tells our representative, Let’s divide the votes, so that you too would benefit as would we,” Beitan said, and noted that “there are also threats against some of our representatives who sat in the polling booth.”
“We will not leave this to the Likud taking action next time,” he vowed. “We intend to submit now a bill requiring the elections committee to place cameras in every ballot station covering the voting area.”

The chairman of the polling station in the recent elections in the town of Ka’abiya told Ma’ariv: “I was the only Jew in the ballot station. The rest were Arabs. Around 7 PM, when we had about 40% of the voters, one committee member came up to me and suggested they double the money I receive for this day, and in return I would allow them to share the votes of those who hadn’t voted. It had already reached the level where they started to ask me, very seriously, how much I wanted.”

“What struck me was that all the committee members were in on this discussion,” he continued. “There were three committee members and one or two observers. I was quite surprised. I told them it was illegal and that I was in favor of democracy, in which everyone votes by himself. Every few minutes, someone approached me and offered me again, ‘Maybe you want to do it anyway,’ ‘It will not really affect the overall result,’ and ‘In any case, everyone lies.’ I told them it was wrong.”

“During the vote counting we had policemen,” he recalled. “They were also Arabs, but if I understood correctly, not from the same village. What stunned me was that even then the proposals continued, and the police heard this and did not say anything.”

The source of the reports about Arab ballot stuffing is Sagi Kaisler, who, on the eve of the 2013 elections, whe he was director of the Samaria Settlers’ Committee, decided to organize a broad volunteer project, in an attempt to preserve as far as possible the purity of the elections in the Arab sector – which were believed to be rampant and served Israel’s left.

In 2013, Kaisler managed to organize some 200 volunteers, who were assigned to the various polling stations in the Arab sector, in spots that were happily handed over to them by the rightwing parties. In the 2015 elections, Kaisler succeeded in placing his people in most polling stations in Arab communities. In the 2019 elections, Kaisler recruited 1,350 activists, with complete support from the Likud.”

Those activists were also behind the effort to install cameras in many Arab polling stations, which the Arabs presented as an attempt at intimidation. Judge Melcer did not agree at the time.

MK Aida Touma-Suleiman of the communist faction Hadash, attacked the Likud’s decision to use cameras at the polls, saying, “I think that Judge Melcer was already wrong when he did not take seriously enough the Likud’s breaking of the law.”

Unbelievably enough, the Arab MK also asserted that no Arab voters had launched complaints about corruption in their polling station, but it was MK Bitan, a representative of the Likud – an outsider – illegally collected materials and passed them on to the judge.

“To come now and throw such sludge at an entire population is unacceptable,” she complained. 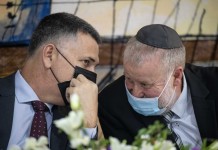