Anat Hoffman, Executive Director of the Israel Religious Action Center (IRAC) and the director and founding member of Women of the Wall, on Wednesday told her members that, due to the health ministry’s restrictions, there won’t be a women’s service at the Kotel Thursday morning.

Rosh Chodesh Nissan is the most important Rosh Chodesh day on the Jewish calendar (it was preceded last Shabbat with a reading of Parshat HaChodesh, Ezekiel 45). But, as Hoffman told her members, “for the first time in 31+ years, Women of the Wall will not gather for Rosh Chodesh prayers at the Kotel. My psyche is a bit ‘out of whack’ by this, but we understand that most important is protecting the health of all people.”


The group was founded in 1988 by Hoffman, a kibutznik from Ramat Rachel who joined the Reform movement in UCLA, where she received her BA in Psychology. Our readers are familiar with Hoffman and her group, which The Jewish Press Online has given ample coverage, almost on a monthly basis.

But this Thursday, Hoffman invited her followers in Israel and abroad, “Join us Thursday morning, March 26, 7 AM Israel time, 1 AM Eastern time, for a Zoom/Facebook Live Rosh Chodesh Nissan event. The service will be shorter: we will start with Shema, move to Hallel and then have a Torah reading (but not from a scroll). The service will still be imbued with spirit, hope and the feeling of community… minus the germs.”

Of course, it’s not germs we’re all concerned about, it’s viruses. Also, trimming the prayer service is also frowned upon, but since women aren’t obligated to have a minyan, hey, knock yourselves out.

Anyway, we should add “No WOW clashes with Haredim at the Kotel” to the long list of #Coronavirusbenefits. 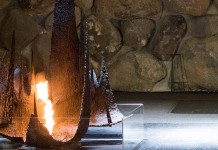