Prime Minister Benjamin Netanyahu and his wife Sara, together with Australian Prime Minister Malcolm Turnbull and his wife Lucy, on Thursday visited the Moriah College Jewish school in Sydney. They were welcomed by students who played musical instruments and sang “Jerusalem of Gold” as well as the Australian and Israeli national anthems. The prime ministers and their wives attended a Hebrew lesson and spoke with the pupils. Prime Minister Netanyahu called on the children to visit Israel.

Then the Israeli PM addressed the crowd, saying, “When you come to Australia, you feel warmth. First of all, the sun is shining, like in Israel. Secondly, people are completely informal, like in Israel. And third, there is just this vibrant friendship, a feeling of kindred spirits, and it’s on this occasion that I come here with a great privilege, with my wife Sara. It’s not the first time we’ve been to Australia, but it’s the first time that I come in the capacity of prime minister of Israel to extend the hand of friendship. That friendship, as Malcolm Turnbull had just said, extends for a century. A hundred years of friendship, and we’re celebrating now the beginning of the next one hundred years of friendship between Israel and Australia.

“I was born one year after the establishment of the state. You all were born later. Probably your parents were born after the State of Israel and maybe some of your grandparents even. But it’s hard to imagine what the world was like for the Jewish people before the rebirth of the Jewish state.

“We take things for granted today, but they’re not obvious. You see, the fact is in modern times there were very, very few Jewish soldiers – almost non-existent. This is a great change compared to our antiquity. You know the story of the Maccabees, yes? They were great warriors. You know the story of Joshua? Great warrior. King David? The other kings of Israel? You know that story. So in antiquity, our people, though we were small, were known for their fierce courage, their ability to fight. We didn’t succeed always, but we always resisted the attempts to oppress us and enslave us, and we produced some of the greatest heroes that mankind has known.

“This is the story of the Jewish people in antiquity, but because we lost our independence against mighty powers, including the Roman empire, we were able to fight for our independence, able to muster our courage, able to show gallantry in the battlefield as long as we kept our land. But once we were driven away from that land, we were stripped of our powers. Century after century, the Jews were stripped of the power to resist the various attacks on our freedoms, on our very existence. And over the centuries in the Diaspora, the Jews who had been known as gallant fighters in antiquity were known essentially as a rootless people unable to fend for themselves, unable to demand the basic rights and respect that any human being and any human group deserves.

“And so we were transformed from this fierce, fighting people in antiquity gradually to a people unable to defend themselves, and this progression of calamities took place over the centuries – first massacres and pogroms, and mass expulsions and then finally culminating in the greatest tragedy of all, in the Holocaust.

“There is a book, a film actually, that was produced by Claude Lanzmann, a French Jew, called Shoah. Have you heard about it? Yes. Well, in Shoah, in the Warsaw Ghetto, the darkest days of the Warsaw Ghetto, one of the survivors, one of the last occupants of the ghetto escapes through a sewage tunnel and he goes to seek help in Warsaw. And he meets some Polish resistance people, non-Jews. And he said, ‘Please help us. Help us. Bring us some help.’ And the Polish resistance responded, ‘We cannot help you. We cannot help our Jewish brethren.’

“And this person goes back through the sewage tunnel, exits in the heart of the Warsaw Ghetto, and he sees no life around him. Everything is silent. Everything is dark. And he says to himself, “I am the last Jew on Earth. The Jewish people are finished.”

“But it is a fact that we weren’t finished. It is a fact that we mustered that ancient courage that characterized our people, that we reestablished our independence in our ancestral homeland, that we rebuilt a state and formed an army that brought the courage of the Maccabees back to life. You see it in the soldiers of Israel. You see it in their courage, young men and women, who time after time stand up and defend our state. And the world wonders and they say, “What is this Israeli army? Where did it come from?” It’s been there all along, but we had to come back to our state. We had to come back and rekindle that spirit.

“So I was five years in the Israeli army. I had a lot of training, walking around the country, hiking through it. It’s not a hike, you know? You carry a fifty kilo pack on your back. It’s not the most pleasant of experiences. Yet I remember that as we were making these marches, I still would look at the country, and I said there is something magical about it. I remember one time we came to the foothills of Masada, after a very lengthy track, and you think… You’d go to sleep, rest your body, but I couldn’t sleep. I was looking at that fortress and I was thinking of our, the great defeat that we had here, which also seemed to be the end of Jewish history. And I looked up and I said, well, we’re here. The Romans are gone. The Jewish people and the Jewish state are resplendent, back to life, able to defend themselves, able to create a future for ourselves, able to contribute to mankind.

“This is the rebirth of the Jewish state, and the amazing thing is the transformation that this created for Jews everywhere, because Jews everywhere drew power, strength, conviction, and pride from the rebirth of the State of Israel. Natan Sharansky told me that when he learned of the Entebbe rescue, it gave him enormous, enormous conviction and enormous confidence in resisting the mighty Soviet empire. Jews were transformed as the Jewish state transformed Jewish history and Jewish destiny. You are part of that destiny. You are part of the reborn Jewish people. 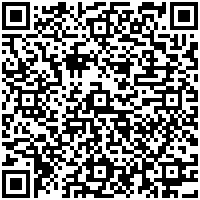