Morgenshtern, a Russian rapper, record producer, and songwriter who first gained fame in 2018 as the author of parodies of popular musicians on his YouTube channel, appealed his designation as a foreign agent by Russia’s interior ministry, TASS reported Monday.

On May 6, the Justice Ministry put the rapper on its list of foreign agents citing his “political activity” that included his appearances on Yoola Labs Ltd. in Israel and Ukraine. His attorney told ta Moscow court: “Alisher is a culture and art figure, he is not engaged in political activities, and therefore cannot be designated as a person performing the functions of a foreign agent.”

Yoola is an international media network with headquarters in Yokneam, Israel, “helping bloggers grow online and offline.” The company’s website states, “We are in the top 5 of the largest international networks in the world and are the leader in the Russian-language video blogging market.”

According to his attorney, the artist had learned about his designation from the media and the justice ministry’s website. “Alisher did not receive any notification about being put on the above list either by email or by mail,” his lawyer told TASS.

Born Alisher Tagirovich Valeyev, the artist changed his last name to Morgenshtern when he was a teenager. His grandfather was Jewish, and even though he is not halakhically Jewish, he has reportedly been interested in Judaism and is close to Chabad.

Morgenshtern released his first music video in 2010, at age 22. Shortly thereafter, he was expelled from university due to his “frank activities on YouTube.” His music videos typically feature soft-core nudity which explains why we can’t link them to this family newspaper.

On January 17, 2020, Morgenshtern released his album “Legendary Dust,” which became his most successful work, getting a million views within the first half-hour of its release and five million in eleven hours. On Vkontakte, Russia’s equivalent of Spotify, in the first two days after its release, the album was listened to more than 21 million times, an all-time record.

In November 2021, Morgenshtern fled Russia for Dubai for fear of retaliation from the government, after he had criticized in a newspaper interview Russia’s cult-like worship of its Victory over the Nazis. The Russian government had a somewhat different version: On November 23, 2021, the Chairman of the Investigative Committee of Russia Alexander Bastrykin said Morgenshtern was “selling drugs on social media.” On December 10, Morgenshtern released the single “Domoy” about his leaving Russia for the UAE.

According to a 2020 law, a Russian citizen may be designated as a foreign agent if he is engaged in political activity in Russia or gathering information of military nature about Russia while being under the influence of a foreign source or Russian citizens or entities that act on behalf of a foreign source, which is manifested in the support of these activities (including the provision of funds or other assistance).

By the way, before all this foreign agent designation happened, in March 2021, Morgenshtern was appointed as the “youth director” of Alfa-Bank, Russia’s biggest private bank, founded in 1990 by Jewish oligarch Mikhail Fridman. The idea was that Morgenshtern could convince at least 100 thousand of his fans to start a savings account. Now, who knows. 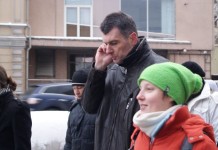