The girls have two brains, meaning they don’t share a single brain, and their heads are connected only by cerebral veins.


The medical staff that spoke to the family told them that the chances of separating the twins are very good. Separation should allow both of them to survive independently.

Conjoined male twins who were attached by the abdomen were born in Israel in 1995. And another, identical case of male Siamese twins took place in 2005.Conjoined female twins were born at Schneider Hospital in Tel Aviv in December 1995, and were successfully separated.On September 27, 2005, at the Sheba Hospital, Siamese twins conjoined at the chest with one common heart were born in Israel. The problem was not detected before birth. Single-hearted conjoined twins die shortly after birth, in this case, too, the twins died three days after birth, as a result of a systemic collapse.In 2013, male Siamese twins were operated on at Rambam Hospital. One of them developed normally and was born alive, but the other was born lifeless after his development stopped during pregnancy and he was partially fused into his brother’s body. In an operation that lasted about 4 hours, the doctors were able to separate the body of the dead brother from the body of the living brother. The only joint organ between the two was the liver, which was left intact in the body of the living brother.

The Talmud (Menachot 37a) inquires about Siamese twins with one body and two heads: on which head to put tefillin, and whether the Pidyon Haben (redemption of the firstborn son) should be paid twice.

The same case is also mentioned in the Midrash (Ibid. Tosfot): King Solomon conducted a test in which he blindfolded one of the heads, and poured boiling water over the other head. Immediately the two heads cried out in pain, and so Solomon proved that they were one person.

Tractate Brachot 61a, suggests Adam and Eve were initially conjoined.

Conjoined twins, also known as Siamese twins, are identical twins joined in utero. It’s a very rare phenomenon, occurring from 1 in 49,000 births to 1 in 189,000 births, with a somewhat higher incidence in Southwest Asia and Africa. Approximately half are stillborn, and an additional one-third die within 24 hours. Three out of every four live births are female.

Surgery to separate conjoined twins ranges from very easy to very difficult depending on the point of attachment and the internal parts that are shared. Most cases of separation are extremely risky and life-threatening. In many cases, the surgery results in the death of one or both of the twins, particularly if they are joined at the head or share a vital organ.

Alice Dreger of Northwestern University found the quality of life of twins who remain conjoined to be higher than is commonly supposed. 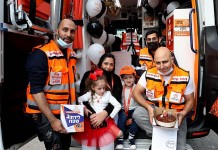 Twins Celebrate Birthday in the Ambulance Where They Were Born 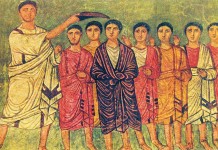