The tragedy at the celebration of Rabbi Shimon Bar Yochai occurred on the night of Lag B’Omer 5671, May 15, 1911, when a crowd of about 10,000 filled the compound and a railing collapsed, causing many to be crushed in the collapse and the panic that followed. Eleven people were killed in the tragedy, the deaths of seven were determined at the scene and of four others in the days following the incident. There were 40 wounded.

According to Shmuel Har-Noy, Director General of the Safed Academic College, the Jewish community in the first decade of the 20th century in Tsfat numbered between seven and eight thousand – Tsfat was the second-largest Jewish community in the country, after Jerusalem, with the largest Chassidic community. There were many kollels in Tsfat, most of whose students depended on the “distribution” charity for their livelihood. Medical treatment in the city was provided by several Jewish doctors but was based mainly on the English and Scottish mission institutions. Towards the end of the first decade, a hospital built by the Rothschild family was inaugurated.

“Tsfat has never seen such a crowd before … happy enthusiasm gripped the residents. Everyone felt that the city had reached its peak and that the merit of the holy rabbi provided for their material and physical needs just as it did for their spiritual and intellectual needs. The tomb complex was packed with a large crowd that reached the roof of the synagogue and prepared for the culmination of the celebration – the moment of lighting the bonfire.

At the appointed time, Rabbi Raphael Din, who bought the right of lighting the first fire, approached. The spirited crowd burst onto the square, singing and dancing, and a few seconds later, the roof railing collapsed, which caused a landslide of large stones under which some of the celebrants were buried.

“About 100 people who were standing on the roof at the time fell from a height of 8 meters towards the courtyard of the building. Forty were injured. Seven were killed immediately and the wounded were evacuated to Rothschild Hospital in Tsfat, which was closed due to lack of funding and was opened especially to receive the casualties. Local residents brought over bedding and bandages from home for the wounded. The reports indicate that the treatment at the hospital in Tsfat was done with great dedication, but four of the injured later died of their wounds. After the tragedy, the hospital was closed down again and operated intermittently until its rededication in 1918 by the Hadassah organization. Today it serves as the campus of the Tsfat Academic College.

“The newspapers were filled with harsh accounts of what happened after the roof had collapsed. One such account went: “… and thus a hail of iron, stones, and people was cast on the crowd that stood below in the courtyard and devastated them. It’s been said that one woman exploded into crushed body parts. One man’s body was cut in half and streams of his blood flowed in the courtyard like water. It is said that one father stood with his son and daughter downstairs and the daughter died immediately, the father was barely removed to Tsfat, and the son is injured all over and is lying in the hospital in Tsfat.”

Nobel Laureate Shmuel Yosef (S. Y.) Agnon, who was 24 at the time, arrived that same day on foot from Jaffa to Meron and witnessed the tragedy which he miraculously survived. He helped rescue the bodies, and later reported:

“… the miracle that was done for me at the revelry of Rabbi Shimon Bar Yochai in Meron, was that a balcony fell and twenty-seven Israelites were killed, and I, who had stood a little while before with all those saints remained alive. How did I survive? … I suddenly heard a big and very loud noise, I thought it was the sound of the lighting of the bonfire, I was sorry for myself—having walked for five days to see the lighting … Meanwhile, they started bringing in stretchers and laid the dead on them. And I, who stood for a little among them while they were alive, became a carrier of the dead.”

Dotan Goren from Bar-Ilan University, who researches the Jewish efforts to gain a foothold in the holy places in Israel in the modern era, wrote that the community leaders in charge of the holy place were sharply criticized for their negligence in maintaining it, despite the repair funds that had been transferred to them in advance.

But the zealots of Tsfat hung the blame for the great disaster on the mixing of men and women in Meron and imposed a ban on women’s visits to Mt. Meron on Lag B’Omer. A year later, in 1912, the decree led to a poor showing at the Rashbi celebration, because many men avoided going to Meron to perform the Halka (first haircut at age three) with their boys without their wives.

Two years later, in 1914, Ada Maimon (Fishman), an educator at the Hebrew school in Tsfat, found out about the ban and organized a feminist protest, climbing to the mountaintop with two girlfriends on Lag B’Omer, to take part in the celebration. She later reported:

“We noticed that the Haredim who came close shied away from us as if they had encountered an impure object. We were three women among thousands of men.”

Upon their return to Tsfat that year, the ban was lifted seemingly by itself and the women of the city resumed their Rashbi celebration in Meron the following year. 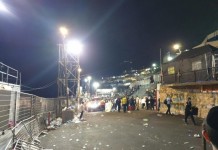