The GoDaddy web-hosting company has suspended the account of the global “Miss Hitler 2020” contest in response to pressure from the Australian Anti-Defamation Commission.


The ADC said in its appeal to the company that the pageant and the content run by the World Truth historical revisionism site violate the company’s rules against hate speech.

The poster on the website of the contest advised prospective “beauties” that the competition runs from August 8 to September 3 of this year. The pageant encouraged women to enter by posting girly Nazi-themed images along with an entry explaining why they “love and revere the Third Reich of Adolf Hitler. . . “Tell someone you know that might participate to register and then help her in the race to win,” the poster urges.

“We have suspended the account and informed the account owner to move the domains in question to another registrar, as they have violated our terms of service,” GoDaddy told The New York Post in an email.

“We thank the company for listening to our concerns and for declaring that anti-Semites and Holocaust deniers will never find a safe haven within the GoDaddy home,” ADC Chairman Dvir Abramovich told The Post in a statement, calling the decision “a glorious victory of good over evil.

“Allowing this site to remain would have crossed many red lines and would have sent the message that it is open season on the Jewish community. 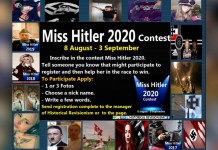 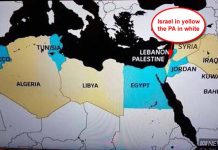 Australian ABC Doubling Down on ‘Wipe Israel off Map’ Shenanigans 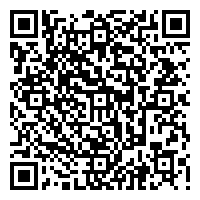