The Department of Biblical Studies at Tel Aviv University’s Rosenberg School of Jewish Studies and Archaeology is launching a new MA program that is the first and only one of its kind in the world: the Study and Research of the Biblical texts of Ethiopian Jewry. The program, named ‘Orit Guardians’ after the Ethiopian Bible, will hopefully be expanded to include BA and PhD studies as well.

Biblical scholar Prof. Dalit Rom-Shiloni, who leads the initiative, explains, “The Scriptures of Beta Israel are accompanied by oral traditions of translation and interpretation, as well as prayers composed by the Kesim for their communities through the ages.


“These cultural treasures are in danger of extinction, if an urgent effort is not made to document and preserve them – and this is our main goal. To our great delight, we found enormous enthusiasm among educated and socially aware Israelis of Ethiopian descent, who wish to safeguard their heritage for future generations.”

The Program is supported by an Academic Committee headed by Dr. Diana Lipton and consisting of TAU faculty members from three departments: Biblical Studies, Semitic Linguistics and Literature.

Prof. Rom-Shiloni says, “The volumes of the Hebrew Bible, found in every Israeli household, are all almost absolutely identical, down to the letter. This text, known as the Masoretic Text, was consolidated in Tiberias between the 6th and 10th centuries AD. We know, however, that Biblical textual traditions existed hundreds of years before that time.

“Research on texts from the Second Temple period, especially the Dead Sea Scrolls, has revealed that in the last centuries BCE Jewish communities held various versions of the sacred texts which were essentially similar, but definitely not identical.”

The Jews who came to Israel from Ethiopia brought their own Scriptures, written in Ge’ez — an ancient Semitic language known only to their spiritual leaders, the Kesim.

“Through the ages, a rich oral tradition emerged alongside the written text, including prayers in Ge’ez, as well as translations and interpretations created by the Kesim for their communities, in languages that they could understand – Amharic and Tigrinya,” Rom-Shiloni says. “But Beta Israel’s way of life changed completely when they came to Israel – detracting from the Kesim’s status, undermining their age-old training processes, and bringing these cultural treasures to the brink of extinction.

“The Orit Guardians program is, in a sense, a rescue mission undertaken to academically study this important heritage.” The students who have just begun their studies in the 2020-2021 academic year are all Ethiopian Israelis with Bachelor’s degrees, highly aware of their heritage and eager to take part in the effort to preserve that heritage.

Rom-Shiloni says the important point is, “They are the only ones who can do the job. Unlike researchers who do not belong to Beta Israel, these students speak Amharic, and have access to the elderly Kesim.

“This is a novel, pioneering and uniquely inspiring project. The students bring immense motivation and commitment, understanding fully well that if they don’t do it, it simply won’t happen – and this heritage that is so precious to them, will be lost.

“We believe that the students’ research projects will contribute to the enhancement of the Jewish identity of Ethiopian Israelis and increase the public’s awareness of their culture, while establishing the heritage of Ethiopian Jews as an academic field of study and research in every aspect – cultural, historical, lingual, religious, spiritual and social – in both Israeli and international academia.” 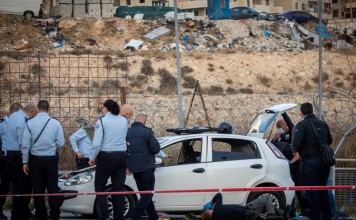 What Happens to a Terrorist Rammer’s Car?