Attorney Martin McMahon, of Martin F Mc Mahon & Associates in Washington, DC, last week filed a federal lawsuit on behalf of 13 “Palestinian and American activists (among them the Dawabsheh family, three of whose members perished in a fire in 2015)” accusing President Donald Trump and his Middle East adviser Jared Kushner of “violating Palestinian civil and human rights.”


In 2019, McMahon filed a different lawsuit seeking $1 billion in damages from “those who enabled the settlements and the settlers to commit war crimes, including genocide, ethnic cleansing and denationalization,” according to Janet McMahon (not related), a writer for the Washington Report on Middle East Affairs. The lawsuit was dismissed the District Court in DC, which was overturned by the DC Court of Appeals and sent back.

McMahon’s new, 175-page lawsuit, says, among other things, that “if AIPAC was active during the colonial days, patriot Tom Payne would have been hanged for advocating independence for the colonies.”

He further elaborates: “The indigenous American Indian population and the African slaves brought to America have been victimized by these identical war crimes. Each group has been subject to ethnic cleansing, genocide, expropriation of private property, confinement to reservations and ghettos, wholesale denial of their fundamental freedoms, subjected to a biased criminal justice system, and deemed to be irrelevant and disenfranchised members of American society.”

McMahon’s delusional lawsuit suggests defendants have committed war crimes as defined by the Nuremburg Charter: “Violations of the laws or customs of war which include, but are not limited to, murder, ill-treatment or deportation to slave labor or for any other purpose of civilian population of or in occupied territory, murder or ill-treatment of prisoners of war or persons on the seas, killing of hostages, plunder of public or private property, wanton destruction of cities, towns, or villages, or devastation not justified by military necessity.”

The lawsuit pins the blame for all of the above on “belligerent settlers financed by Defendants like Adelson, [Daniel] Gilbert [from Cleveland, Ohio], and [Friends of the IDF chairperson Susan] Levin-Abir, and protected by rogue Israeli soldiers, have been engaging in this type of criminal activity for at least 30 years in the OPT (Occupied Palestinian Territories – DI).”

McMahon’s lawsuit reads in places more like the ranting of a madman than a legal document. Take for instance his reference to “Defendant Bibi Netanyahu” (sic) who “authorized Israeli Army leadership to adopt policies in the OPT designed to effectuate extra-judicial killings. For example, the Israeli Army can now shoot an unarmed Palestinian on sight.” It should be interesting to see if the federal court would even consider this diatribe.

Another policy “Defendant Bibi” adopted, according to McMahon, is “a bullet for each Palestinian child.” Indeed, McMahon argues, “his apartheid regime is the reason why 28,000 world citizens located in 27 different countries view Israel in a very negative light and everything it stands for.”

These are not bad numbers, as bad reviews go – roughly 1,000 thumbs down per country, “Defendant Bibi” could do worse.

Here’s another passage from the lawsuit which reads like a combination anti-Semitic tome and PLO propaganda – check not just the messy details, but the style, too:

“The war crimes inflicted on the Palestinian civilian population were necessary because the Zionist Organization of America (herein after ZOA) mandated in 1898 that the country of Palestine would be the location of the new Jewish homeland. Consistent with that mandate, PMN (Prime Minister Netanyahu – DI) and former PM Sharon decided forty years ago that Palestinians had to become a denationalized, dehumanized, and an irrelevant population if Ben-Gurion’s vision of a sterile Jewish state was to be established in Palestine.”

You get the idea? Here’s a little more (if you’re a fan of anti-Semitic swill, check out the PDF file): “The World Zionist platform (removal of all non-Jews from Palestine) dictated that Israel’s founding father, Ben-Gurion (1948)- ‘must take over all of Palestine,’ as confirmed by former PM Golda Meir- ‘We must destroy any vestige of the Palestinian culture.’ To accomplish these objectives, PMN gave a green light to his local guerilla army, i.e. settlement militia units, to maim and murder Palestinians, destroy their olive groves and their livestock, and steal their private property.”

The reason I chose to report this lawsuit, besides the fact that Sunday mornings are notoriously slow, news wise, is twofold: it depicts the meeting between classic, Julius Streicher anti-Semitism and classic Arab anti-Semitism; but then it gets particularly chilly, seeing as in less than a year, people who believe in this toxic stuff, including many young Jews, could take over the White House.

As always, my brothers and sisters in the United States, consult your local Nefesh B’Nefesh office. 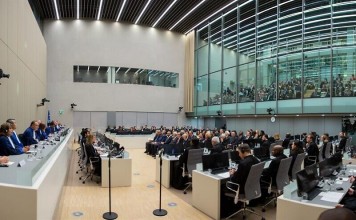 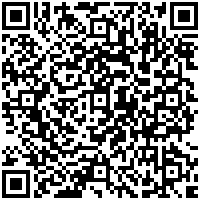