American Jews, themselves an immigrant community, have historically used domestic issues such as immigration policy as their impetus for overwhelmingly supporting Democratic candidates for president.

The 2016 election was no exception, with 71 percent of Jewish voters choosing Hillary Clinton over Donald Trump.

Nonetheless, some of the president’s Jewish supporters say they still often feel a communal stigma that’s associated with their choice of candidate.

The grassroots group Jews Choose Trump aims to counter that by creating a “safe space for people to come together” and express their views without shame, embarrassment or others pointing fingers at them, says one of its founders, New York-based activist Richard Allen.

“The shutdown of discussion is sometimes so great that there was essentially nobody in the Jewish world who would state publicly that they support Trump,” he says.

The new entity is trying to alter that narrative, collecting names and emails of Jewish Trump supporters who affirm their position publicly. Its Facebook page, meanwhile, has amassed more than 18,000 followers.
“A lot of Jews feel extremely isolated in their support for Trump,” says another founder, Carol Greenwald, based in Maryland. “We thought that by having people list their names, it would create a feeling of, ‘I’m not alone; there are some Jews who think like I do.’ There’s comfort in that.”

Lee Green, who organizes monthly Jews Choose Trump meetings in The Villages near Orlando, Fla., says the gatherings fill “a need for social groups for Jewish Republicans so that we can socialize and mobilize and give each other ideas.”

Trump remains a lightning rod on the immigration issue—from issues at the southern U.S. border to the highly publicized feud stemming from his tweets about four minority congresswomen collectively known as “the Squad.” The president has accused the freshmen congresswomen—Alexandria Ocasio-Cortez (D-N.Y.), Ilhan Omar (D-Minn.), Ayanna Pressley (D-Mass.) and Rashida Tlaib (D-Mich.)—of un-American behavior, also based on anti-Semitic statements from Omar and Tlaib.

Jewish organizations have largely condemned the president over that dispute.

Yet even Democratic presidential candidate John Hickenlooper, the former governor of Colorado, has called out anti-Jewish sentiment within his own party. Hickenlooper’s acknowledgment in a recent interview with JNS that “sometimes that line [between free speech and anti-Semitism] can be blurred” lends insight into the increasingly fertile environment for groups like Jews Choose Trump and Jexodus, the latter formed to encourage Jewish millennials to leave the Democratic Party.

“We’re certainly grateful for the old Democrat Party, which was more moderate. But that’s not the party anymore,” states Green.

When it was launched before the 2016 election, Jews Choose Trump cited two reasons for its support of the Republican nominee: Iran and Israel. Today, the group’s website states that the president has “come through for us” on those issues, listing Trump’s pro-Israel policies such as moving the U.S. embassy to Jerusalem, defending Israel at the United Nations and cutting funds for anti-Israel U.N. programs.

Trump also pulled the United States out of the 2015 Iran nuclear deal—a stark contrast to the Democratic field, as nine of 10 candidates in June’s first primary debate pledged to re-enter the accord—and recognized Israeli sovereignty over the Golan Heights.

Although Trump’s Jewish critics often blame him for anti-Semitism that’s driven by white nationalism, Green expresses hope that American Jews “will examine where anti-Semitism is actually coming from.”

The former director of the activist arm of the Committee for Accuracy in Middle East Reporting in America, Green argues that the majority of anti-Semitism on college campuses stems from well-organized groups on the left, while most anti-Semitism from the right is comprised of “isolated incidents from unstable individuals.”

As members of the fledgling group look towards 2020, Green points out that in 2016, it was “a few thousand votes that often made a difference” in swing states like her home state of Florida.

“We see how the opposition is embracing our enemies—those who want to destroy us and those forces who want to demonize our people,” he says. “And now we have a true friend in the White House.” 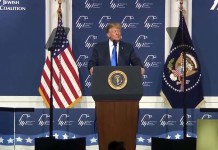 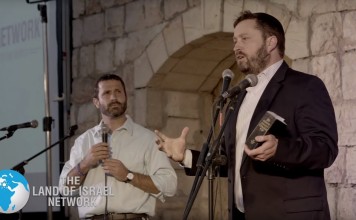 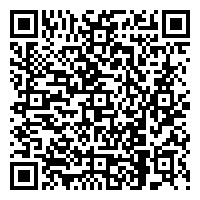