Gideon Saar, currently the most popular anti-Netanyahu candidate, has hired the services of four American strategic consultants, all former Republicans, whose most recent endeavor has been The Lincoln Project, aimed at preventing the re-election of Donald Trump and defeating all the Republican Senators who were running in close races in 2020, Israeli journalist Amit Segal reported Monday.

The four, Steve Schmidt, Stuart Stevens, Reed Galen, and Rick Wilson, used to work for the election campaigns of GW Bush, John McCain, Mitt Romney, and Arnold Schwarzenegger. But on Dec. 7, 2019, they announced in a NY Time op-ed by George Conway, Steve Schmidt, John Weaver, and Rick Wilson, the foundation of the Lincoln Project political action committee. Other co-founders include Jennifer Horn, Ron Steslow, Reed Galen, and Mike Madrid. Stuart Stevens joined the project in May 2020.


The Lincoln Project is probably the deadliest political weapon ever introduced in US politics. Its aim was not to sway fellow Republicans – most of those reacted with disgust to the LP videos. They were aiming at Independents who were jolted by those short and effective messages, which were coming at them with an ever-increasing frequency.

Washington Post columnist Jennifer Rubin said the LP ads were devastating for several reasons: “They are produced with lightning speed, and thereby catch the public debate at just the right moment; they hammer Trump where he is personally most vulnerable (e.g., concerns about his vigor, concerns about foreign corruption); and they rely to a large extent on Trump himself—his words and actions.”

About two-thirds of the LP ads focused on the 2020 presidential election, but they also released videos attacking as Trump-enablers Republican Senators Cory Gardner, Martha McSally, Thom Tillis, Susan Collins, Joni Ernst, and Majority Leader Mitch McConnell, who were up for reelection in 2020.

This is exactly what Saar is trying to do in this election in Israel, aiming at a very narrow swath of Likud voters, but mostly at the “floating votes” which traditionally include about 20% of the votes.

The first LP ad resembling the LP tactics was published by Saar’s New Hope party on all available social media outlets, and it is jarringly reminiscent of the LP hatchet jobs in the US.

Under the title “The Sad Truth about Netanyahu,” the ad focuses on a recording of Prime Minister Benjamin Netanyahu—most likely done in secret and without his knowledge or approval during a conversation with campaign staff. The slightly garbled sound is enhanced by the familiar, jarring subtitle text in white and red over black—extremely clear—saying:

The Corona gave us a jump to 40 mandates when they thought that we solved the problem. And when did we start to go down? When it turned out that the pandemic was back. 500 infections a day, 1,000 infected a day. We lost again those same ten mandates. If we want to boost our slate, in order to hold on to the 40, we’ll make it happen not despite the Corona – we’ll make it happen because of the Corona.

The video ends with a line in red: “Netanyahu doesn’t count (you, the voter),” with text in white below saying, “Over 4,000 dead from the Corona,” followed, under the same “Netanyahu doesn’t count,” “Hundreds of thousands unemployed,” “Tens of thousands of business owners who collapsed,” and finally, in red: “You,” suggesting you are the potential victim of the pandemic, the unemployment and the economic collapse under Netanyahu, and the punch line: “He counts mandates.”

No doubt, it’s by far more effective stuff than Israelis are used to both in terms of the sophistication of the video production and the raw bluntness of the message. It is not just merciless, it deals with Netanyahu the way the LP dealt with Trump, making him the unmitigated enemy of everything good. Should it prove successful – of which I, for one, have little doubt, this style of attack will surely be adopted by others since Israelis are as competent on a computer as anyone in America.

And so Israel is completing the inevitable trifecta: American cars, American movies, and American hate. Also, I’ll bet you they’ll do a better, more effective job than even the Lincoln Project. 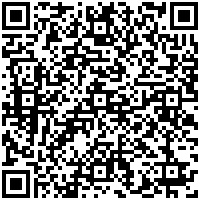