The Lawfare Project is urging Zoom and the University of California, Merced, to cancel an upcoming event featuring PFLP (Popular Front for the Liberation of Palestine) terrorist Leila Khaled.

The event, titled “Free Speech and Palestine,” is scheduled to take place on April 23 at noon Pacific Time, and is being co-sponsored by San Francisco State University’s Arab and Muslim Ethnicities and Diasporas Studies (AMED), as well as the University of California Humanities Research Institute. It will be hosted by UC Merced’s Zoom account and moderated by UC Merced professor Sean Malloy.

The Lawfare Project has written letters to both Zoom and UC Merced ChancellorJuan Sánchez Muñoz informing them that the event could violate federal law by providing material support or resources to a foreign terrorist organization.

Khaled played a critical role in two airplane hijackings in 1969 and 1970 as a member of the U.S.-designated terrorist organization the Popular Front for the Liberation of Palestine (PFLP). The Israeli Shin Bet considers her part of the Jordanian command of the PFLP.

Last September, Zoom canceled an event also featuring Khaled hosted by the San Francisco State University’s AMED after the Lawfare Project informed the company that permitting Khaled to use its platform would violate federal law. Additionally, some 90 Jewish and pro-Israel groups also urged SFSU president Lynn Mahoney to cancel the event, who repeatedly defended the event by invoking freedom of expression.

According to an Eventbrite page advertising the April 23 discussion, the event will “explore a set of questions that center Palestine at the heart of discussion on free speech and academic freedom.” It particular, the event appears to explore why the original September 2020 discussion was shutdown and seeks to explore questions “around censorship, free speech, and the role of corporations like Zoom on university campuses, how can we center the voices of Palestinians and of oppressed peoples?”

As of publication, registration for the Zoom event remains live.

“Just as we did with SFSU’s previous attempt to host Khaled, The Lawfare Project has notified Zoom and trusts them to continue to comply with the law and their own Terms of Service by refusing to provide material support—here, in the form of its video conferencing service—to a member of a designated Foreign Terrorist Organization, as is prohibited by 18 U.S.C. § 2339B.” 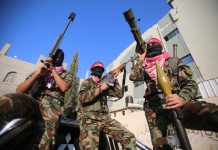