Law enforcement officials say a bomb found in the van registered to one of the two suspects in the horrific attack on a Jersey City kosher grocery last month could have killed or maimed people as far as five football fields away – and there was enough material in the van to create a second bomb like it.


US Attorney Craig Carpenito said Police Detective Joseph Seals, who was shot and killed by David Anderson and Francince Graham in a nearby cemetery prior to the shootout in the kosher grocery, may have prevented a bigger bloodbath.

Hate and Hope in New Jersey

“We believe he threw off a broader plan, Carpenito said, adding that Seals’ actions “probably saved dozens, if not more lives.” It was the detective’s death that first drew law enforcement towards the scene of what later became a war zone, locking down an entire neighborhood for hours.

The shootout, officials confirmed, was indeed a bias crime against Jews, and against the law enforcement community.

The US Attorney and the head of the local FBI told reporters Monday that Anderson and Graham had researched a Jewish community center in Bayonne.

The suspects had cased the kosher grocery store multiple times, including the morning of the attack.

The US Attorney also confirmed that a Jewish man driving near Newark Airport several days earlier had been shot at – ballistics showed two of the shots that hit his car came from one of the weapons belonging to Anderson and Graham.

The livery driver who was murdered the weekend before the shootout was shot with the same weapon that had been used to fire at the Jewish driver near Newark Airport, authorities said.

Both suspects had handcuff keys in their underwear, and both had gone to Ohio for target practice shortly before they carried out the attack. Carpenito said there was no evidence of co-conspirators.

Although officials have no established a formal link between the pair and the Black Hebrew Israelite movement, the two had identified themselves in the past with the group.

Social media posts from Anderson were found that expressed anti-Jewish and anti-police elements, according to NBC News 4.

Five firearms were linked to the duo: the four that were recovered from inside the kosher grocery included an AR-15 style weapon, a shotgun and two semi-automatic weapons, including a Glock. The fifth was a weapon that had a homemade silencer and a homemade device to catch shell casings, and it was found in the U-Haul the pair drove to the store, which was fitted with ballistic panels, and which also contained the powerful bomb and materials to create a second one.

Two of the five weapons have been traced via their serial numbers to separate gun shops in Ohio, where they were purchased in Spring 2018.

A coalition of federal law enforcement entities is continuing the investigation, Carpenito said.

One veteran police detective and father of five, one non-Jewish civilian who worked at the grocery store, and two civilian Chassidic Jews were killed in the hate-fueled domestic terror attack that took place on December 10, 2019.

There but for the grace of God and the courage of Jersey City’s finest, it could have been infinitely worse. 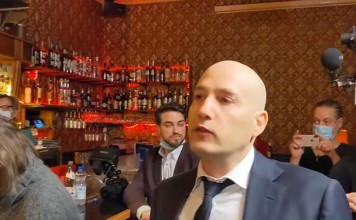