Steven Moss, 71, from B’nai Israel Reform Temple in Oakdale, Suffolk County, NY, on Friday will begin a 60-mile bicycle ride from the infamous Arbeit Macht Frei slogan at the entrance to the Auschwitz-Birkenau death camps to the Jewish Community Center of Krakow.


Moss, who served for 48 years at the Long Island temple, will be part of Ride For The Living (RFTL), part of a festival event that, as its website declares: “gives you a chance to immerse yourself in Krakow’s Jewish past, present, and future. Come discover and celebrate Jewish life in Poland. RFTL boasts a full program of activities, including a private guided tour of Auschwitz…”

The “inspiring one-day, 60-mile bike ride from Auschwitz-Birkenau to JCC Krakow” takes place during the Jewish Culture Festival, which welcomes more than 30,000 people and offers some 300 events each year, according to the website.

The festival also offers the biggest Shabbat dinner in postwar Krakow, as well as visits to the seven synagogues in the Kazimierz Jewish district.

Each festival is held in late June or early July and takes nine days, from Saturday to Sunday, offering concerts, exhibitions, plays, lectures, workshops, and tours. The two most important concerts are the inaugural concert on the first Sunday, and the final concert on the last Saturday of the festival. The opener usually takes place in one of the synagogues and features cantoral music; the closer is always held outdoors, in Ulica Szeroka, the main street of Kazimierz, and features klezmer music.

“Seventy years ago this entire Jewish community was murdered by the Nazis, exterminated,” Moss told Newsday on Wednesday. “And now you see what’s going on. It’s wonderful.”

According to RFTL, the bike ride was inspired by Robert Desmond, who rode his bicycle 1,350 miles from London to Auschwitz. 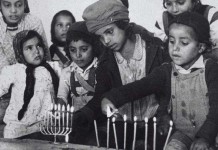