“It is unfortunate that some members of the opposing team disrespected Israel’s national anthem,” Berman told JNS. “We are proud to be the only university who sings both the American and Israeli national anthems before every athletic competition and major event. Nothing makes me prouder to be an American than living in a country where our religious freedom, our Zionism and our commitment to our people will never be impeded and always be prized.”

The two athletes, part of the Brooklyn College Bulldogs men’s volleyball team, kneeled on the ground when the song blared on the loudspeaker before the match against Yeshiva University’s Maccabees on Feb. 23. The Brooklyn players were later identified as Omar Rezika and Hunnan Butt in social-media posts about the event.

A video of the athletes kneeling on the ground was posted on Facebook by Sarah Serfaty, a Stern College student watching from the stands inside Yeshiva University’s Max Stern Athletic Center.

The Bulldogs won the game 3-0.

While some social-media users claimed Rezika and Butt refused to shake hands with the Jewish athletes, Yeshiva University debunked that claim. The Jewish school wrote on Twitter that accusations about a handshake not taking place are “not accurate.” It added, “Please rest assured that if anything like that should ever occur we would handle it through the proper channels.”

A Brooklyn College spokesperson said the school “strongly condemns all forms of anti-Semitism and hatred,” and also defended the students’ rights under the First Amendment to kneel during Israel’s national anthem.

Both teams did not respond to a request for comment from JNS, though many social-media users took to the Bulldogs’ official Instagram page to call out the athletes for not showing sportsmanship during the game.

Their anti-Semitic actions were called “disrespectful” and “shameful,” and one Instagram user wrote to the team saying, “You should put out a statement either condemning the anti-Semitic actions of the two who knelt, or kick them off your team. If Bklyn won’t punish the players, the conf needs to,” referring to the CUNY Athletic Conference. 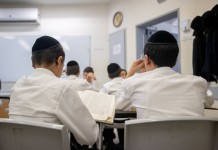 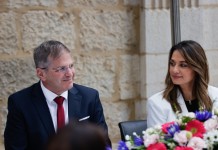