National Security Adviser Jake Sullivan will visit Israel on Tuesday for a Wednesday in-depth discussion with Prime Minister Naftali Bennett on Iran’s nuclear program, a senior Biden administration official said on Monday. The official was speaking to reporters on condition of anonymity.

Meanwhile, the US may be prepared to lift sanctions against terrorism-supporting entities such as the Central Bank of Iran as a means of luring Tehran back to the nuclear talks in Vienna (see below).


Sullivan will land in Israel Tuesday afternoon, and in the evening will meet President Isaac Herzog. On Wednesday he will meet with PM Bennett, Defense Minister Benny Gantz, and Foreign Minister Yair Lapid. Sullivan and his delegation will also take part in the fourth session of a US-Israel working group on Iran.

The same official said that Sullivan, along with the National Security Council’s Middle East Director Brett McGurk and other officials, will also meet with Palestinian Authority Chairman Mahmoud Abbas in Ramallah, to discuss strengthening US relations with the PA.

But the main purpose for the Sullivan visit, according to the administration official, is to “talk about where we see the state of Iran’s nuclear program and some of the timelines,” the official said. “It will be a good opportunity to sit down face-to-face and talk about the state of the talks, the time frame in which we are working, and to re-emphasize that we don’t have much time.”

The senior official said “time is running out” for the Iran nuclear talks in Vienna, and “we will talk with the Israelis on what is going to happen in the coming weeks.”

White House Press Secretary Jen Psaki said in a Monday briefing that “because of the way that the Iranians approached and participated in the last round of talks, the President asked the national security team to be prepared in the event that diplomacy fails and to take a look at other options. And that work has been ongoing, including in consultation with a range of partners around the world.”

State Dept. Spokesperson Ned Price said during his own press briefing that “as we continue to watch what Iran does and what Iran says publicly, privately in the context of these indirect negotiations in Vienna, we’ll make a judgment based on that as to whether the JCPOA remains in our interest. And all along, we are not wasting any time in thinking about those alternatives, and we’re doing more than thinking about alternatives. We’re actively discussing those alternatives to this variety of diplomacy. … We’re discussing alternatives to that with other members of the P5+1, with other partners in the region and beyond.”

Iran Says It Has Won in Vienna

According to MEMRI, the seventh round of the nuclear negotiations in Vienna with Iran on reviving the 2015 JCPOA deal has ended with an Iranian victory. The website cites Kayhan, a Tehran-based publication considered “the most conservative Iranian newspaper,” that put out an editorial saying:

“Iran is the greatest victor in the Vienna talks, whether these negotiations succeed or fail, taking into account Iran’s focus on economic diplomacy and on its regional and international trade alliances, and the upper hand of the resistance axis in the regional developments. If America accepts Iran’s legal and legitimate conditions and its demands to completely lift all the sanctions, this means a great victory for the Iranian people! And if [America] does not, by neutralizing the sanctions and improving the economic situation, Iran will continue with its nuclear program and will increase uranium enrichment from 60% to 90% if necessary, and will become a global nuclear power – and this means a great defeat for America!…”

MP Vahid Jalalzadeh, Chairman of the National Security and Foreign Policy Committee of the Iranian Parliament, said on Friday on national TV that the Trump administration knew that a Democrat in the White House would want to return to JCPOA, so they re-labeled some of the nuclear sanctions under “terrorism sanctions.”

State Dept. Spokesperson Price offered an indirect response to that complaint on Monday, saying: “We are prepared … to lift sanctions that are inconsistent with the JCPOA. The Iranians know that. It is something that the P5+1 knows. It’s something that we have been quite clear about. It is essentially the formula that was deemed appropriate in 2015, when the deal was consummated, in 2016 when it was implemented by the P5+1 and Iran. It essentially says we’re prepared to lift sanctions inconsistent with the JCPOA, as long as Iran places itself back within the strict confines, the strict nuclear confines of the JCPOA in terms of the stringent verification and monitoring, in terms of the other restrictions that the JCPOA places on Iran’s nuclear program.”

In other words, the CBI, which funnels billions to Iran’s proxy terrorist groups across the Middle East, will be taken off the terrorism list and the sanctions against it will be lifted, to appease the Islamic Republic and convince it to return to the talks. 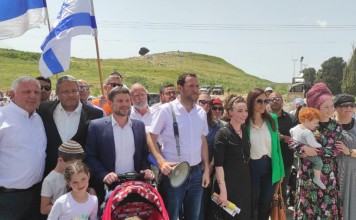