By Debra Linesch and Evelyn Stettin

What do you get when you mix a Jesuit publishing company, a Reform Jewish scholar, an Orthodox Jewish painter, and a thesis on human-divine encounters?

In Panim el Panim: Facing Genesis, Visual Midrash, the product is a surprisingly coherent collaboration of image and text, which not only examines the book of Genesis, but also seeks to uncover real-world lessons and advice from the biblical passages that are accessible to all sorts of readers.

The title refers to the biblical Hebrew phrase for “face to face,” which is complicated by the other biblical and rabbinic notion that G-d has no face. Still, men engaged the divine on several occasions in the Bible. Jacob, after his pyrrhic wrestling victory that cost him a leg, called the battleground P’niel (literally “I saw G-d”), for his self-declared panim-el-panim encounter with G-d. Exodus reveals that Moses spoke with G-d panim-el-panim, “as a man would address his friend,” and Deuteronomy reiterates: “And no other prophet has risen from the Jews like Moses, whom G-d knew panim-el-panim.” Gideon, meanwhile, had a panim-el-panim encounter with an angel, and when Moses reminded the Israelites in Deuteronomy about the revelation at Sinai, he was careful to say “panim-b’phanim” (perhaps “face in face”) rather than “panim-el-panim.”

The notion of G-d’s face, or portrait, ought to be an aesthetic as well as a theological question. Theology can tells us that the Bible deals in metaphors and that references to the strong arm of G-d are just that − metaphors rather than literalisms. But whatever encounters Moses, Jacob, Gideon, and the Israelites had with G-d or G-d’s entourage, there does seem to have been a visual encounter of some sort.

So what does a person see when she or he encounters G-d? This is a provocative question, evidenced by the secrecy that has surrounded Kabbalistic interpretations to biblical episodes like Ezekiel’s vision. But interpreting the question with a brush, a quill, or chisel is far more dangerous, for an image of G-d seems to be necessarily a violation of the Second Commandment.

The different authorial encounters that went into Panim el Panim – the second book in Marymount Institute Press’s series, Robert B. Lawton S. J. Studies in Faith, Culture, and the Arts – mirror the human-divine encounters in the Bible. (The first book in the series presented commentary on a 14th century Christian poem, which, in part, praises Jews.) Linesch, a Reform Jew, is an art therapist and chair of the Graduate Department of Marital and Family Therapy at Loyola Marymount University in Los Angeles. Stettin, an Orthodox Jew, is an abstract painter whose works often have spiritual and psychological themes. The two view their collaboration − Stettin’s images and Linesch’s words − as creating what they call “visual midrash.”

“The core value on which Panim el Panim rests is that there are many pathways to Torah,” said Stettin in an interview, perhaps echoing the rabbinic concept that there are 70 faces (“panim“) to the Torah. “My paintings evoke a pinpoint of the whole, as does any single commentary.” Stettin believes that G-d engages every person in a relationship, but “‘facing’ is making a decision to engage with it.”

Stettin’s image accompanying the Genesis 24 text where Isaac brings Rebecca to his mother’s tent is a red canvas with an orange egg-shaped form titled “Wholeness.” As in Mark Rothko’s paintings, the red consists of several shades rather than a uniform coat of paint, and a ghost-like form beneath the oval could be a stem and leaves supporting a flower. Linesch’s commentary addresses Isaac finding comfort for Sarah’s death through his new bride. “In this text we recognized movement toward emotional wholeness, and we explored the complex connections between current and past relationships,” she writes. “The Torah encourages us to understand the connection between the ways we are loved and the ways we love.”

Wholeness also surfaces in the Genesis 50 account of Joseph’s reunion with his father Jacob. The painting, titled “In-between,” consists of two rectangles, one green and one purple, divided down the middle by a yellow line. A yellow circle sits in the middle of the purple rectangle, while a red rectangle occupies the top part of the green zone. Linesch’s commentary notes that she and Stettin fused text and imagery together just as Joseph and Jacob achieved wholeness in their encounter. “The Torah encourages us toward self-exploration, looking back and forward simultaneously, suspended between creation and redemption,” she adds.

But the image with its yellow barricade seems to suggest division rather than wholeness. The yellow circle appears to be blocked off from the red rectangle, as perhaps Jacob was from his own son. It must have been a confusing time for the elderly father to balance his joy that his favorite son was still alive with the pain in realizing that same son had chosen to wait so long to inform him he was still alive. Perhaps this is why, when Jacob introduces himself to Pharaoh he says, “few and bad were the days of the years, and they did not keep pace with the days of the years of my ancestors;” a pessimistic speech for which the rabbis say Jacob was punished.

These sorts of complicated family interactions are not lost on Linesch. “It is clear to me in my reading of Genesis that the intra-familial dynamics that are manifest in the stories are very real, very human and represent family experience that is both ancient and contemporary and somewhat paradigmatic,” she said in an interview. “As modern readers, it is possible to reverberate with the experiences of our forefathers and foremothers, learning from them as holders of feelings we all know, rather than as models of virtue we could never attain. I believe that one of the many wisdoms of the Jewish tradition is in the very real depiction of family life in our scriptures.”

The Midrash is an ambiguous body of writings that, one is said to be foolish to believe entirely, yet at the same time, it is heretical to completely deny it. “Enveloped,” which illustrates the biblical tale of the Tower of Babel, is a visual mapping of this idea. The image, with its scratch marks on the bottom, perhaps conveys the confusion and lack of common language that was the punishment of the tower builders, but it remains an abstract image that is up to viewers to decipher. Through her abstract paintings like “Enveloped,“ Stettin interprets the biblical stories with an equally open-ended eye. Linesch’s commentaries do not seek to explain the paintings – which work far better as paintings than they would, if forced to become texts – but the two working in concert, function much like the Midrash does: illuminating the text, personalizing it, and adding a moral charge to readers and viewers to incorporate it into their lives. 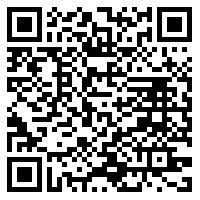