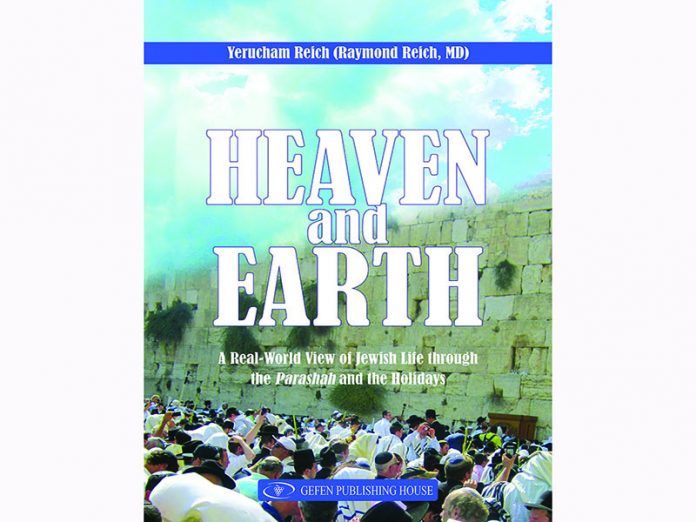 Heaven and Earth: A Real-World View of Jewish Life through the Parasha and the Holidays
By Yerucham Reich (Raymond Reich, M.D.)
Gefen Publishing House


It has never been easier to publish books. This combined with the fact that the parsha is everyone’s favorite topic to ruminate on has given us an abundance of books and commentaries on the Chumash.

But how much time do you have? And how do you know how to find the one or two that will deepen your understanding of Chumash and strengthen your relationship with Hashem?

May I make a suggestion? A new collection of Torah essays, Heaven and Earth by Dr. Yerucham (Raymond) Reich, delivers on multiple levels – it is edifying, spiritually uplifting and entertaining – and introduces the wider Torah world to a bright thinker and gifted writer.

The enjoyable essays of Heaven and Earth (subtitled “A Real-World View of Jewish Life through the Parasha and the Holidays”) are thoroughly modern and thoroughly traditional – touching upon the narratives of the Avos and others in the Chumash, the mitzvos of Hashem, engrossing 20th stories from the previous generation or two, and some modern medicine and psychology to boot.

Dr. Reich is able to weave these strands together both because he is a very curious and thoughtful person (who, full disclosure, is also a fellow congregant in my shul and someone I have known well all my life), and because he demonstrates a fealty to the faith and the text. It doesn’t hurt that the writing is clean and magnificent. (Sample sentence: “The word HaMelech, printed large and bold as it is in our High Holiday machzorim, was obviously printed large and bold in his soul as well.”)

The results, often, are mini plays, some tragedy and some comedy (and some both), delivering instruction and a moral.

Take the essay on Vayechi, which manages to teach several salient lessons through stories in such an engaging way that you feel like you’ve read a chapter from All for the Boss or To Vanquish the Dragon.

And, like a novelist, Dr. Reich sets the scene and draws you in from the get-go. And so we meet Naftali (pronounced in “that Chassidic style ‘Naftuleh’ ”) who finally escaped the Nazis late in the war, reached the Russian lines, and posed as a gentile Pole, with the made-up name Jan Zaleski, rising to the rank of captain in the Polish forces in the Red Army.

When Naftali is placed in charge of a prison, he frees two surviving but now imprisoned Jewish boys who were severely beaten every day, telling them to run for their lives. He didn’t know their fate until one Simchas Torah, many years later, when he traveled by bus to watch the Bobover hakafos in Crown Heights, and the gabbai honored him (calling him “Zaleski”) with carrying the Torah. He was surprised and then looked up to see that one of those boys was now an important personage in the Bobover court. They both survived.

There’s much, much more in Naftali’s remarkable life, and yet, ultimately, one wonders: this is all well and good, but where is Dr. Reich going with these stories?

And then he ties it together – to Tanach: to Yosef and to Yaakov and to Dovid Hamelech. Some, Reich says, go through pain and challenges, losing their faith; others, like the Avos mentioned above, have their faith strengthened by challenge.

And “others, like Naftali, become estranged, but not altogether. On some level, an important but ceryainly incomplete level they remain connected.”

Heaven and Earth is replete with characters like Naftali. But they are obviously not merely characters. They are people we feel an instant connection to, people from our collective past.

There’s 17-year-old Sol Hachuel, who, in 1834 Morocco, submitted to death rather than renounce her Judaism; there’s Tsvi Nussbaum, who may be the boy facing the Nazis with his hands up in the famous photo; there’s Rabbi Luttwak, the rosh yeshiva who comes across a lost goat and wonders what is his personal obligation to return lost property since, as a well-known rosh yeshiva, he can’t very well climb over a fence and then drag around a lost goat; there’s Chaim Nachman Bialik, whom you may think you know, but about whom you’ll learn a great deal more.

Storytelling is a big part of Heaven and Earth, but it is only a part.

In one of my favorites essays, on Parshas Toldos, Dr. Reich displays his strong ability to explain the pesukim themselves – in other words, in rendering parshanut. We know Yaakov as someone who is described as tamim – whole, complete, good. Reich points out that Yitzchak is also referred to in the same way, as an olah temimah – a perfect offering. But, he goes on, Yaakov and Yitzchak do not posses the same kind of temimus.

“Yitchak would have been constitutionally incapable of pulling off Yaakov’s ruse,” he writes. Each had different journeys and different missions in the service of Hashem, and each one’s personality fit what he was meant to achieve.

Another wonderful essay, entitled “Oxygen,” implores readers to show love to the people around them while they are still around, and not wait until after they have passed, when it is too late.

Indeed, Reich can heartfelt and romantic. He can also be coy and funny, as exemplified by some of the titles of his essays, such as “Dust in the Wind: A Love Story,”

And his medical expertise serves him – and the reader – well. The essay on Bereishis (notably called “Deus Ex Punctum Lacrimalis”), intimately guides the reader through the physiology of the tear duct as a tool in the discussion of God’s acts of creation. The essay on Vayetzei includes observations about DNA and about the psychological trifecta of the id, ego and super-ego.

These are not mere excursions, for they lead to lessons in emunah and life.

Let me add one lesson to Reich’s many: pick up his book, Heaven and Earth. I have no doubt it will be your companion to shul every Shabbos this year. 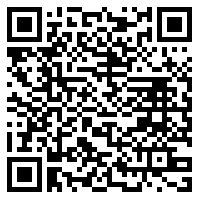