Although antisemitism, as reported to law enforcement agencies, is not running rampant in Westchester County, N.Y., the reason could be that people are not reporting acts of antisemitism.

The last time acts of antisemitism were officially reported, the number was in the teens, under 20, Elliot Forchheimer, CEO of the Westchester Jewish Council, exclusively told The Jewish Press. “I don’t think that’s a true number … because unless people report, we can’t see the trends. If you don’t see the trends, we can’t allocate the resources that law enforcement needs and educators need.”

The Westchester County District Attorney’s office has a three-person hate crimes bureau. Hate crime incidents, including acts of antisemitism, are reported to the district attorney’s office. However, there doesn’t appear to be a sense of urgency to get accurate numbers from the community, as there is no campaign in place to report crimes of antisemitism. The head of the Hate Crimes Bureau acknowledges that the bureau passively collects data.

“It’s important to collect data and it’s important to be transparent about the data you’re collecting because it helps the community,” said Assistant District Attorney Catalina Blanco Buitrago, the hate crimes coordinator for Westchester County. Speaking to The Jewish Press, she said, “You’re serving what you are doing to feel heard and to know you care because half of the issues in hate crimes and bias crime incidents is that the communities don’t feel heard. What we’re trying to do is change that. We are trying to make it so that people not only know that they are being heard but know what we’re doing to help them get the justice that they deserve.”

Even though Blanco Buitrago seeks transparency, sometimes hate crimes are intentionally not labeled as hate crimes.

“Sometimes the law is very restrictive and the best chance that you can give a case is not having it labeled by law, not in the community, a hate crime. Sometimes the best way to give a case its best chance is to label it a hate crime outside of the paperwork and talk about it as a hate incident, as what it is because the hate doesn’t go away,” Blanco Buitrago said. “The label you put on a piece of paper doesn’t change what it is, the fact that it involves hate or that it involves hate speech or that it involves hate sentiment or that the victim thinks that it’s a hate crime. It doesn’t change that. That does not mean that it has to be charged as a hate crime because maybe that isn’t the best chance that the case has. Label it as a hate crime. That doesn’t mean you have to plead it out as a hate crime because maybe that’s not what the victim wants. The victim may just want the acknowledgment there is hate, not necessarily that there be that word hate on a piece of paper. Give the case its best chance. Sometimes that’s on a piece of paper having those four letters “H-A-T-E,” sometimes its best chance is not that.”

That deception leads to confusion for law enforcement partners. It also unintentionally leads to false conclusions.

“What you also find is that a significant number of bias incidents don’t get reported at all,” Forchheimer said. “That’s the unknown. Our response is to work as closely as we can with law enforcement and with educational institutions to combat antisemitism and any kind of bias.”

Forchheimer notices a pattern of the types of Jewish hate expressed in Westchester County.

“The acts of antisemitism which we have been seeing in increased numbers are the swastikas, the hate symbols, the language, language on the Internet or anonymous letters being sent to Jewish leaders or to Jewish institutions,” said Forchheimer. “We have not seen, thankfully, things that are happening in person or in real time. On the other hand, maybe it’s because we put an enormous number of resources into safeguarding our institutions. A swastika, like a noose, is very upsetting and can’t be minimized. That’s what we’re working on combatting. That’s with education and working with our partners outside the Jewish community, law enforcement, and our neighbors in other ethnic and faith-based groups.”

Westchester County has a population of just slightly more than one million people. It contains 48 public school districts, and 42 local police agencies that cover an area of 450 square miles consisting of six cities, 19 towns and 23 villages.

“At one point the incidents of antisemitism in the county were in the teens per year. I don’t have the latest data,” Forchheimer said. “The data is sometimes hard to gather; frankly, because so many people are collecting the data. I don’t believe it’s anywhere near 100 incidents. Also, it depends upon how you count. Does every email count as one? It’s too much a matter of how you count.”

In an effort to keep the counting of antisemitic acts as up-to-date and accurate as possible, the district attorney’s office is working on becoming a central clearing house.

“This is something that is being worked on with the office of the DA, which has been extremely cooperative as well as the county government [and] the police departments. We are working on having a central reporting system, that’s in progress but we’re not yet there.”

One area of concern is the use of social media by the world’s haters.

The DA’s office has a larger audience than just Jews to be concerned about. They are often assisted by groups amongst all communities afflicted by haters, including the Hispanic, Asian and gay communities. The DA’s office lumps all the categories into one and calls it bias or hate.

“Create a bridge of trust between your community partners and your DA’s office or your law enforcement agency,” Blanco Buitrago, 33, said. “Even if the victim or the victimized group don’t feel that they can trust the police department or the district attorney’s office or whoever is making those final decisions, that there is someone in the middle that you can trust that can help in creating that bridge of trust and to bring justice to the people who have been victimized.”

Forchheimer and Blanco Buitrago both agree their goal is to get to zero acts of hate crimes in the county.

“One crime is too many. Any crime against any member of our community, especially when it involves hate, is too much,” said Blanco Buitrago. “We have seen it in our county. It’s something that’s hard to quantify without really having numbers.”

Forchheimer doesn’t believe the High Holy Days is the time to worry about a rise in antisemitic acts in Westchester County, but the last days leading up to Halloween concern him.

“We have something in Westchester,” he continued, “the emergency communications system where we have 30 Jewish synagogues and institutions, and each institution submits three people to be on this communication technology where in the case of an emergency in the Jewish community, there will be a text, email and phone calls are dispatched automatically to those three people giving them a message, an alert,” Forchheimer revealed. “Most communities don’t have that. We’re really proud of that technology. We’ve had that for about a decade. We’ve had to use it around Pittsburgh, Poway, that kind of stuff. I’ve been doing this job for 18 years and security was 10 percent of our work when I started and now it’s about 50 percent of our work is working securing communities and combatting antisemitism.” 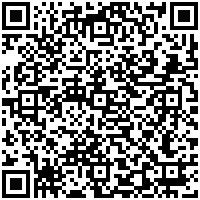