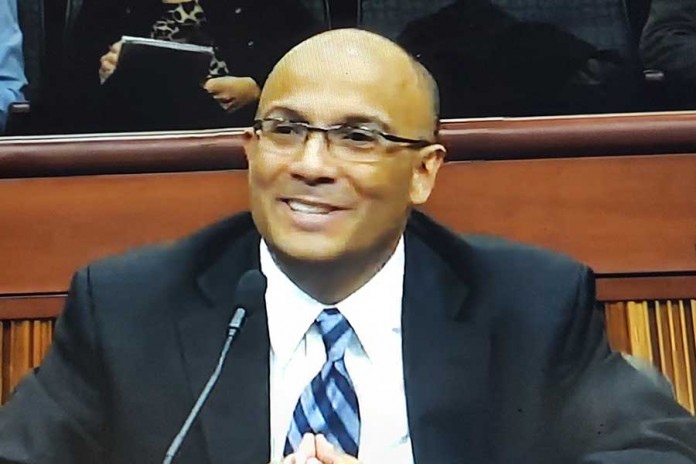 First it was a failed vetting process for Lt. Governor when Governor Kathy Hochul chose then-Senator Brian Benjamin to be her number two in the administration on September 9, 2021. Seven months later, Benjamin was forced to resign on April 12, 2022, as Lt. Governor after having been indicted earlier that day on federal wire fraud and bribery charges, to which he pleaded not guilty. On December 6, 2022, the charges were dismissed, although he still faces two additional charges for falsification of records.

On the first day of the legislative session, January 4, Senate leadership professed a desire to get along, but as all New Year’s resolutions go, the kumbaya moment did not last more than two weeks. The short-lived desire to play nicely in the sandbox pitted most Senate Democrats against Senate Republicans and Hochul, a fellow Democrat.

The second strike came on Wednesday, January 18, when Hochul’s nominee for the chief judge of the state’s highest court, the Court of Appeals, was rejected by Senate Democrats on the judiciary committee for allegedly being too conservative.

In his opening remarks at the committee hearing, Senate Judiciary Chairman Brad Hoylman-Sigal (D – Greenwich Village, Manhattan) set the tone by telling Judge Hector LaSalle, “This won’t be a roast but it won’t be your bar mitzvah either.”

During the five-hour hearing, Hoylman-Sigal, 57, chastised LaSalle, a Democrat, for running on the Conservative Party line.

“I’m heartsick to hear that you continue to state that you were honored to run on all the party lines you have run on,” Hoylman-Sigal, who is Jewish, said. “As an LGBTQ person, the Conservative Party stands for everything I’m against. They are against my right to marry, against my ability to have kids, against transgender youth. It’s hurtful. It also suggests to me a willful ignorance about the platform of the Conservative Party. Candidates should know what parties stand for. Frankly, I don’t know what you stand for given that party line you took.”

In response, LaSalle, 54, said, “Senator, every statement you made about the Conservative Party I repudiate. I do not agree with any statement that treats you or any of your rights any differently than anyone else’s. I share your concern for those positions.”

Later in the hearing, answering questions from Senator Toby Ann Stavisky (D – Whitestone, Queens), LaSalle said, “I have never been approached by any political leader about my decisions in any way, ever.”

This exchange did not go over well with Conservative Party leaders.

“Senator Hoylman-Sigal wants prospective judges pre-judged in this state to meet his own ideological bent. Maybe it’s time that the Conservative Party reconsiders its cross endorsements of Democrats,” said Gerard Kassar, chairman of the state Conservative Party in a prepared statement. “Serious people understand that Mr. Hoylman-Sigal is not among them but his position as Senate Judiciary Chairman is cause for genuine alarm. How is it possible that a man with such prejudices is in a position to so radically affect our judicial system and the lives of each and every New Yorker?”

“I was honored to be able to run on the various lines I had the opportunity to run on over the years. I was proud to have Democrats and Republicans agree on me at a time of such hyper-partisanship. When I ran in 2008, to have Working Families, Conservative and Independence parties endorse me, is something I’m proud of. I’m proud to have received the highest ranking by the New York State Bar Association, the Academy of Trial Lawyers and by the Civil Defense Lawyers. I got the civil defense lawyers and the plaintiffs’ lawyers to agree that I was the highest qualified,” LaSalle said.

At times during the hearing an onlooker needed to be either a lawyer or have a deep interest in the legal profession as legislators cited court cases in which LaSalle had a role in the ruling. Some of these cases included People v. Bridgeforth, People v. Molineux, also known as the Molineux rule, Campanella v. Long Island Lighting Company, Martin v. Curran, commonly known as the Martin rule, Cablevision Systems Corp. v. Communications Workers of America District 1 or Duane Reade v. Local 338. Four of the 19-member Senate committee are not attorneys.

More than one senator apologized to LaSalle for the negative assertions reported in the media and among their colleagues regarding his decisions.

“My strong impression is that you are a good, decent man and a man of integrity. You have been unfairly treated during this process. I agree that some of your rulings have been unfairly criticized. More disheartening, though, is I believe you personally, your character, has been maligned by some,” Senator James Skoufis (D – Cornwall, Orange County) said at the hearing.

“To suggest, for example, that because you narrowed a subpoena, you are anti-woman or anti-choice is just gratuitous and outrageous. I disagree with that narrowing but by no means can you extrapolate those kinds of character assassinations. Some individuals take exception with you being a former prosecutor. I do not. I know some individuals would have strongly preferred to see a public defender or some person with literally zero experience as a judge sitting where you’re sitting right now as a nominee. Let me be clear, I would never support a nominee for the highest court in New York state who has never spent a day as a judge in New York state.”

Then Skoufis, 35, lowered the hammer as to why he objected to LaSalle’s nomination.

“I have been a strong supporter of organized labor as a legislator here in New York. I am deeply troubled by the Cablevision decision you signed onto.” Skoufis, who represents chareidi Jewish communities, including Satmar chassidim, concluded.

The result of the Cablevision case allowed corporations to bring defamation suits against union leaders, silencing attempts of unions to malign the reputation of the cable company.

In trying to clarify the Martin rule and how it relates to the Cablevision case, Senator Andrew Lanza (R – Great Kills, Staten Island), said, “The Martin rule prohibits lawsuits against unions and union representatives. It seems to me that your decision was based on your determination that the Martin rule does not protect an individual, whether a union member or not, from violating the law.”

To which LaSalle stated, “I wholeheartedly agree with the concept that big business should not be using litigation to chill the voices of organized labor. That tactic is inappropriate and should not be rewarded.”

“You do not come across as a right-wing conservative nut,” Lanza said.

Senator Shelley Mayer (D – Yonkers, Westchester County), a Jewish lawmaker, made her decision to vote against LaSalle’s nomination more than one week before the hearing. In her newsletter dated January 9, 2023, Mayer wrote:

“As a New York State Senator, I have a duty to act with the greatest scrutiny and consideration before casting my vote to confirm a nominee for the highest court of New York state. After my review of the decisions of Presiding Justice (PJ) Hector LaSalle, and a respectful and frank personal meeting with PJ LaSalle, I announced that I will be voting “no” on any vote to confirm PJ LaSalle to the position of Chief Judge. I also will be joining the Judiciary Committee, as I had requested before the nomination of Judge LaSalle, based on my longstanding concerns with access to justice and the operation of the courts.”

With her decision firmly stated, Mayer, 70, did not attend the hearing on January 18, 2023 but wanted answers to questions anyway – to what end is still not known. Chairman Hoylman-Sigal was designated to ask those questions on Mayer’s behalf.

Do you know why there aren’t Spanish interpreters at a minimum in Westchester County or other counties served by the second department, where the Spanish speaking population is such a significant part of the community?

LaSalle said, “I was unaware that these town courts don’t have them. I share with the Senator a very big concern about interpreters. We’re having some problems in Queens getting interpreters who speak certain dialects of Cantonese or Mandarin. I hope, if confirmed, that we can find ways to use technology so if we have an interpreter in Brooklyn perhaps, as long as there are no violations of constitutional rights, that interpreter can work over counties throughout the state especially in languages that aren’t spoken as commonly.”

Senator Zellnor Myrie (D – Prospect Lefferts Gardens, Brooklyn) who represents the neighborhood of Crown Heights, was one of many lawmakers who focused their questions and comments on the Bridgeforth case, where LaSalle ruled the state constitution does not protect jurors from discrimination based on color and was unanimously overturned by the Court of Appeals.

“Do you view color as a distinct classification than race? If so, is it protected by our Constitution?” Myrie, 36, queried.

“It is,” LaSalle answered and then continued. “The Bridgeforth case deals with being able to serve on a jury. In no way should an immutable characteristic be used to deny anyone the opportunity to serve on a jury. I applaud the decision in Bridgeforth. It’s the first time ever that any state court in the nation had indicated that skin color could be a separate class to be considered. That was groundbreaking.”

In the aftermath of all the questioning of LaSalle’s decision, he countered by saying, “I stand by every decision I signed on to,” LaSalle said.

When all was said and done, LaSalle lost his bid to lead the state’s highest court by one vote – 10 to 9, even though many who voted against LaSalle praised him during the hearing. Those who voted for his nomination decided his failed nomination should not be forwarded to the full Senate for a vote. The committee vote seemed to be final. Now, Hochul is deciding whether or not to sue the legislature and the Senate specifically, to move the failed committee vote to the full floor for debate.

If the governor moves forward with that tactic, one scenario could be the most ironic of all. The Court of Appeals could be the final arbiter in the decision as to who will lead the prestigious legal body, the court of last resort.