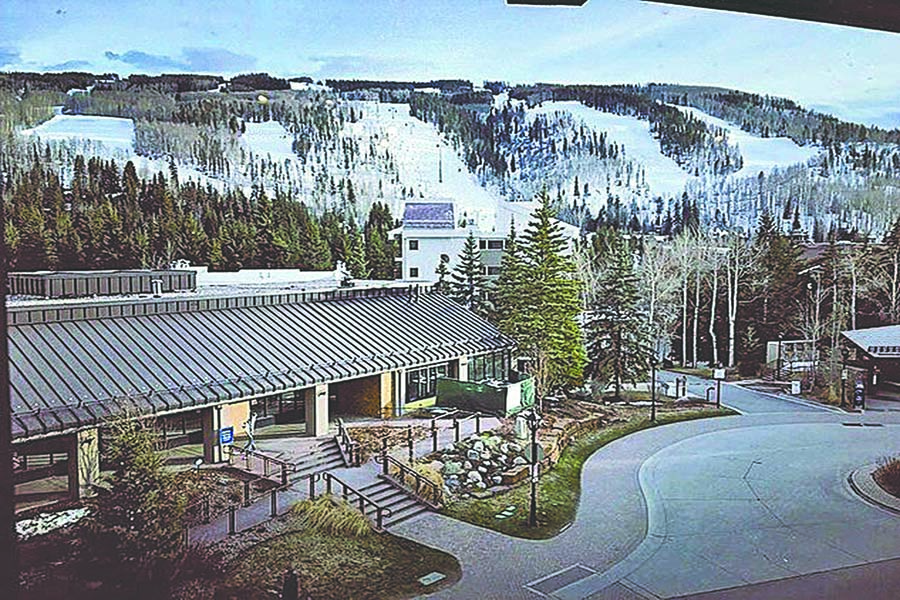 Life in Vail, Colorado offers a dream vacation with beautiful vistas and unlimited activities in the winter or summer, and a year-round Jewish community. The Jewish Community Center – Chabad of Vail offers an uplifting experience and not just because Vail is 8,150 feet above sea level.

Rabbi Dovid and Doba Mintz moved to Vail in 2006 from Crown Heights shortly after their marriage. Shabbos services were first held in their 1,000 square foot apartment with guests creating beautiful atmospherics, but making things very crowded. After two years, the Chabad of Vail moved to a storefront location in an area called Vail Run. It was a twenty-minute walk from town, and they expanded three times over seven years.

The rabbi had been looking for the opportunity to move closer to town, but it would have taken a miracle to find a new building in a very small village. The entire Vail municipality is only 4.5 square miles, and the village encompassing the resorts and private communities is compactly smaller. Additionally, the town is a self-governed municipality with strict zoning laws.

The original inhabitants of this area, the Ute Indian tribe, called it The Shining Mountains. When the white settlers first arrived in the mid-1800s, the tribe fled. In 1877, there were 422 Jews in Colorado. During the 1870s, fortune hunters thronged to the Gore Range seeking riches in gold and silver reported to be in the mountains. The miners not only drove out the remaining Utes, but also depleted the mineral resources and then abandoned the Valley. That left sheepherders until 1930 when Charlie Vail was appointed chief engineer to oversee the construction of Highway 6, the road meandering through the Eagle Valley that connected Denver to Vail. Although this mountain road later became part of Highway 70, Charlie’s nomenclature of Vail Pass remains today.

During World War II, the US Army’s 10th Mountain Division camped near Vail to train an elite group of soldiers in backcountry survival and as ski troopers. One of the tactical skiers, Pete Seibert, was wounded in Italy during the war. After his recovery, Pete became a professional skier. Remembering the beauty of Vail and the potential economic opportunity this undeveloped area afforded, Pete partnered with Earl Eaton, a local rancher to develop the area. Bringing in his old friends from the 10th Division, Pete and Earl established the Vail Ski resort in 1962. The City of Vail was founded four years later.

The development of Vail exploded with the building of hotels, resorts, and private homes. The current population of Vail is estimated to be 5,500. With many Jews owning a second home in Vail, and with thousands of Jewish tourists, Chabad jumped at the opportunity to purchase a vacant building in Lionshead, the base of the ski resort and minutes from most of the hotels. Overcoming the obstacles necessary for the Vail Town Council to approve a zoning change from commercial to religious was only part one, it also needed approval from 170 neighbors. After accomplishing both, they had two months to raise the $5,000,000 for the purchase of the 8,500 square foot building. Miraculously, it all came together and The Jewish Community Center – Chabad Vail began remodeling and constructing a magnificent shul in the epicenter of Vail and convenient for its Jewish homeowners and tourists.

The shul was originally called the Chabad of Vail but now has the additional moniker of Jewish Community Center because it is, and always has been, open to all Jews regardless of background or level of observance. Peak times include Yeshiva break, December holidays, and Presidents week when the average attendance at Shabbos services can jump from the usual 60 to 160! The minyan during Yeshiva week often sees twenty men for weekday services.

Then there is the Maguen David Vail Congregation within the Chabad of Vail that is the home away from home shul to about 70 residents whose primary abode is Mexico City. These Yidden generally visit three times a year. They have their own minyan with Sephardic davening.

Now, Vail is not just a ski town; the minyan after Tisha B’Av averages 60 men daily. There are usually about 90–100 reservations for Rosh Hashanah dinner and the Seders accommodate about 250 people with both Chabad and Sephardic programs.

However, skiing is what attracts thousands of Jewish visitors to the area. Vail has the third largest ski resort in the United States and boasts the first gondola in the country. Today it has 33 ski lifts and 193 marked ski trails. It also has largest free shuttle bus system with ten hybrid electric busses. While Vail has 335 inches of snow annually, it also has 300 days of sunshine. The average high temperature during winter months is between 28–33 degrees Fahrenheit, while the average low is 5-8 degrees. The average summer daytime temperature is 75 degrees.

In addition to offering tourists daily minyanim, the Jewish Community Center also offers kosher food. Meals, prepared by a professional chef, can be ordered through the shul’s website or through the hotels’ concierge services. My visit to Chabad of Vail occurred during the Three Weeks, which accounted for there being only seven families ordering from Kosher Vail: six from two medical conventions and my order. In season, they can have over 100 people for Shabbos dinners at the Chabad Center. For a bigger selection, food can be ordered from East Side Kosher Deli in Denver which is about 100 miles away.

Chabad of Vail offers a Hebrew School on Sundays that has approximately forty students. A Women’s Luncheon, which occurs three or four times a year, draws about fifty ladies. There is the Distinguished Lecture Series with special guest speakers such as Rabbi Lau, the former Chief Rabbi of Israel, when hundreds turn out. The guest speaker this month was Jona Laks, a Holocaust survivor, who spoke about her and her twin sister being subjects of Dr. Josef Mengeles’s horrific experiments. There are other programs such as Mommy and Me, Jewish Story Hour, and the Yeladim Club.

Bikur cholim is another important function of the shul. The Steadman Clinic, part of the Vail Health Hospital now undergoing a $100 million expansion, is a world-renowned facility for expertise in the field of orthopedics. Besides Jewish physicians there for training, there are Jewish patients from Israel and around the world seeking treatment.

Over the last nine years, Rabbi Mintz has presided at over twenty bar mitzvahs. While he has officiated at approximately ten weddings, he does not do “destination weddings.” Rabbi Mintz feels a couple needs the guidance and relationship with a local rabbi and therefore he will ask tourists to bring in their home rabbi or he attends their weddings and bar-mitzvahs in their hometown, with one such bar mitzvah having been held recently in Israel.

The closest Jewish cemetery is in Leadville, about an hour away. There are sixty kevarim there with twenty new plots recently becoming available. Taharas are performed in Denver, but the rabbi has officiated at two levayas in Leadville and others throughout Colorado.

Of course, there is the annual Chanukah Menorah lighting. The chanukiyah that is in front of the shul was the rabbi’s own artistic idea. He said thirty to forty people every day can be seen posing for pictures in front of the novel menorah whose branches are made from skis. There is a secondary menorah of similar artistry affixed on a car for Chabad’s well-known “mitzvah mobile.”

When asked about success stories, the Rabbi tells of a young man who obtained a degree in hospitality services and moved to Vail for on-site training at a local resort. After attending classes at shul, and subsequently spending Shabbosim at the rabbi’s home, he became a fully observant baal teshuvah and recently moved to Denver.

Another one of the rabbi’s success stories is something that he speaks about with great modesty, but has become a minyan revolutionizer for smaller shuls and resort towns. The rabbi hired a computer programmer to develop a minyan maker. This allows visitors to sign up for the minyanim they wish to attend and the system sends texts announcing the times and the number of attendees. Looking for the “tenth man” is now as easy as looking at your cell phone. The rabbi has shared this handy tool with numerous other synagogues including resorts in Montreal, the Berkshires, and Niagara Falls.

While there were a few Orthodox residents in Vail prior to Rabbi and Rebbetzin Mintz arriving, many more have purchased homes here because there is an Orthodox shul. The shul is not only open to every Jew; it is accessible to every Jew. There is a chairlift on a secondary stairwell to help those unable to ambulate the stairs. The convenient location is on Main Street and is in the immediate vicinity of the ice-skating rink, the Imagination Center for children, the gondola is only a hundred yards away and it is across the street from the hospital.

Convenience is not all that makes the Jewish Community Center – Chabad of Vail a special shul. The Rabbi and his wife have both been spiritual forces in the solidifying and growth of an Orthodox community. The views from the shul, now one year old, are spectacular. There is a concept among ski fans of “Ski In/Ski Out.” This is when you can go from the door of your hotel or restaurant right to the slopes. Rabbi Mintz quips, “We have Daven-In/Daven-Out. You can spend as little or as much time at our special shul as you want.”

For elevated davening or the opportunity to rise to a higher level, the spiritual ascension of being at the Chabad of Vail is indeed a glorious and uplifting experience.