I just acquired a relatively recent but rare and important rabbinic work: a first edition of Resha Vesefa authored by R. David Abuhatzeira and printed in 1923 after his murder. R. David was the grandson of R. Yaakov Abuhatzeira, known as the Abir Yaakov, the patriarch of the prominent Moroccan rabbinic family. 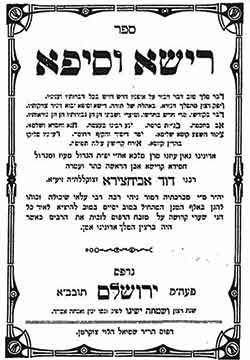 The life of R. David, as documented by his family and community, is so far removed from the luxuries of the modern world that it’s hard to fathom that such a life could have been lived only a century ago (albeit in a small town in rural Morocco).


Born in 1866, R. David, after his father’s passing in 1908, took over the reins of the Jewish community and yeshiva. Shortly after, he transferred his responsibilities to other family members and his younger brother, R. Yisrael Abuhatzeira, later known as the Baba Sali, took the helm of the yeshiva.

From 1909 until 1914, R. David locked himself in a room with his father-in-law and relative, R. Moshe Tourgeman, where they lived an ascetic life, fasting and studying day and night. Some of his practices included not ever walking on public roads; his study and mikveh were in his home, and when forced to leave the house, he would travel via the rooftops of attached homes so as not to see anything improper or encounter any distraction.

He was a life-long vegetarian and was known for his extensive fasts. He would not sleep on a bed, and the little sleep he allowed himself took place in a chair in his study. Daily, he would lie in a coffin to remind himself of the day of death and dispel any thoughts of haughtiness.

In 1917, France invaded and took control of Morocco, and intense local fighting began between various local rulers and the French. The local ruler in the region of Tafilalt, Mulai Mohammad ben Kassam, where the Abuhatzeiras resided, rebelled against the French, drove them out of town, and murdered the members of the Moroccan royal family.

He accused the Jews of siding with the French and rounded up all the Jews in the area to the town center with the stated intent of killing them. R. David calmly led his community and informed them that he prayed that he alone be taken to be killed so the entire community could be saved, which is indeed what happened. Legend has it that R. David was placed in a canon and shot out of the canon to his martyred death, and the community was saved.

Following his murder, his youngest brother, the Baba Sali, took his writings and worked on them to prepare them for publishing. This work, Resha Vesefa, included many prominent approbations and a lengthy introduction by Baba Sali in a beautiful poetic language, entirely composed of rabbinic phrases. A recent edition sources the phrases and found that the introduction alone contains phrases from over 250 rabbinic works.