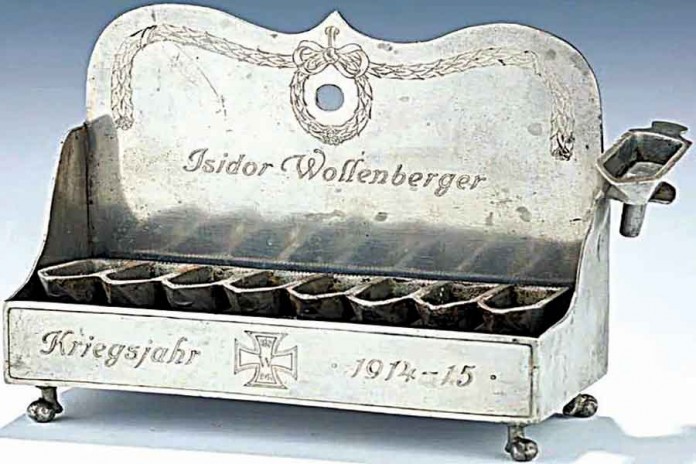 Chanukah is fast approaching, so I thought I would detail some of the most expensive and interesting antique chanukiot that have appeared at auction in the last decade, concluding with a chanukiah formerly owned by one of the most famous personalities of the 20th century. 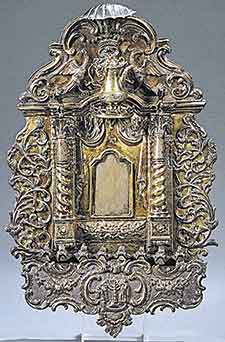 In May of 2009, an incredible offering of antique Jewish ceremonial objects came to be auctioned at Skinner in Boston. These pieces were originally sold at auction in New York City in 1949, and before that were part of a private collection in Paris; some of the objects were illustrated in a lavish book published in 1930. As is typical with Judaica that has an iron-clad provenance dating to before World War II, many of the items in this sale set auction records (for the time).


Undoubtedly, the star of this auction was a magnificent chanukiah in silver, dating to 1787 from Galicia. Standing over 18 inches in height, the backplate imitates the Eastern European style of Torah arks, displaying two columns and a pulled-back curtain revealing a door in the center. The most visually arresting part of the chanukiah is at the very bottom, which depicts men dressed in 18th century synagogue attire lighting a representation of the Temple menorah. Against a very conservative estimate of $60,000-$80,000, this chanukiah sold for $314,000. 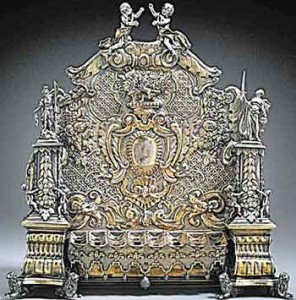 Just a few months after the auction in Boston, another silver chanukiah with pre-war provenance appeared at Sotheby’s in New York. That example, hailing from mid-18th century Germany, had been passed down from one generation to the next from a 19th century collector of antique books and objects, Selig Meier Goldschmidt (1828-96). Goldschmidt was noted for many things in his lifetime, notably among them as the patron and supporter of Rav Samson Raphael Hirsch. The backplate of this chanukiah is embellished with elaborate rococo ornamentation. Flanking the oil receptacles are two figures on a pedestal: on the left, Yehudit holding the head of Holofernes; on the right, young Dovid HaMelech holding a slingshot. Estimated at $200,000-$300,000, it sold for $542,500. Today this chanukiah is the centerpiece of the impressive Judaica collection of the Museum of Fine Arts in Boston and is on permanent display there. 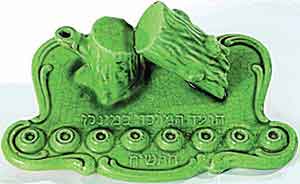 Going ahead a few years to November 2014, a rare, green glazed ceramic chanukiah came up for sale at Kedem Auctions in Jerusalem. This chanukiah was manufactured in a displaced persons camp in Munich, Germany in 1947. The truncated tree with sprouting leaf is the symbol of She’arit Hapleta (the surviving remnant), a term used to refer to Holocaust survivors. Unlike other DP camp-made Jewish items, extant examples of this chanukiah are quite scarce; about ten are known to exist, including one example in Yad Vashem. Given an estimate of $7,000-$10,000, it sold for $23,370. 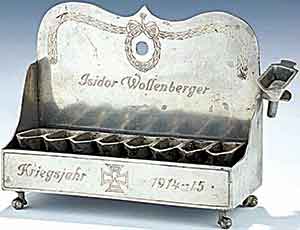 In June 2017, a curious, if not somewhat disturbing, chanukiah came up for auction at J. Greenstein & Co. in New York. Made of pewter, this example, (originally) rather plain in construction and appearance, was made around 1910, its form and material being a faithful copy of pewter chanukiot that were popular in 18th century Germany and during the late 19th and early 20th centuries. A desire to “have the style of Judaica akin to what our grandparents had” became somewhat in vogue for German Jews wishing to buy objects to use for Shabbat and chagim. This type of “re-issued” pewter chanukiah is not particularly collectible today, and is worth at most $300 or $400. However, this particular example was expertly engraved with a laurel wreath, the name “Isidor Wollenberger,” the years “1914-1915,” and finally, “Kriegsjahr” (“war year”), next to a depiction of the famed German military award, the Iron Cross. Isidor Wollenberger (1869-1928) was found to have been buried in a Jewish cemetery in Germany, and obviously was too old to have served in the German army during the First World War. Apparently, the engraving is some sort of patriotic homage paid by Wollenberger to Germany during the war, which of course, in hindsight, is beyond tragic. Given an estimate of $3,500-$5,500, it sold for $7,366. 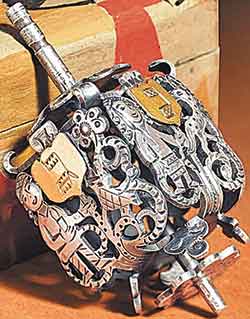 The oldest European dreidels in existence date to the 18th and 19th centuries. All are made of wood, and the few examples that are known reside in the collections of the Jewish museums of New York, Berlin, and Basel. These types of truly old wooden dreidels have never appeared at auction. The oldest dreidels that do appear on the marketplace, including at auction, are from the late 19th and early 20th centuries, are made of cast lead, and hail from countries such as Germany, Poland, and the Ukraine, with most examples selling for well below $100. Dreidels made of pieces of cast sheet-brass expertly soldered together by artisans at the Bezalel School in Jerusalem dating from the 1920s also appear regularly, sometimes achieving prices as high as $1,000.

In December of 2018 at Sotheby’s, a record price for a dreidel at auction was realized. Made in the modern era – 1965 – a charming silver and gold dreidel bearing depictions of children and a bird, deer, and dog was given an estimate of $10,000-$15,000, as it was created by the artist Ilya Schor, whose Jewish ceremonial objects have become extremely collectible of late. The dreidel realized a price of $23,750. 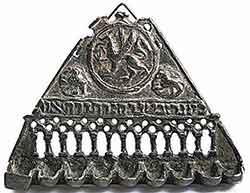 Seen here is a triangular chanukiah in brass. Above the oil wells is the Hebrew “For the Commandment is a lamp, and the Torah is a light” (Proverbs 6:23). The rest of the backplate depicts two small animals, along with a large-winged beast in the center, mythological in origin. This chanukiah belonged to… Sigmund Freud. Yes, that Sigmund Freud, the “father of psychoanalysis,” who among other things, was vehement in his declarations against religious observance of any sort. Freud was a collector of antiquities, including objects belonging to cultures long extinct. While this chanukiah is quite old – dating to the 13th century – and is exceedingly rare, why did he choose to own it? Do we apply the “Pintele Yid” idea to Freud? Or is there a sinister explanation, like the chanukiah representing a culture Freud thought would become extinct? We’ll never know.

This piece is one of only two medieval-era chanukiot known; the other example (featuring different animals) is on permanent display at the Bernard Museum of Judaica, located inside Temple Emanu-El on Fifth Avenue. If this type of chanukiah ever appeared at auction, it would likely be given an estimate of $100,000-$200,000. For the Freud example, I think the estimate would be double that because of the provenance. This chanukiah has been on display at the Sigmund Freud Museum in Vienna since the museum was founded in 1971. 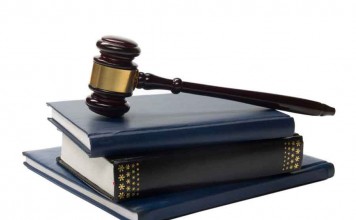