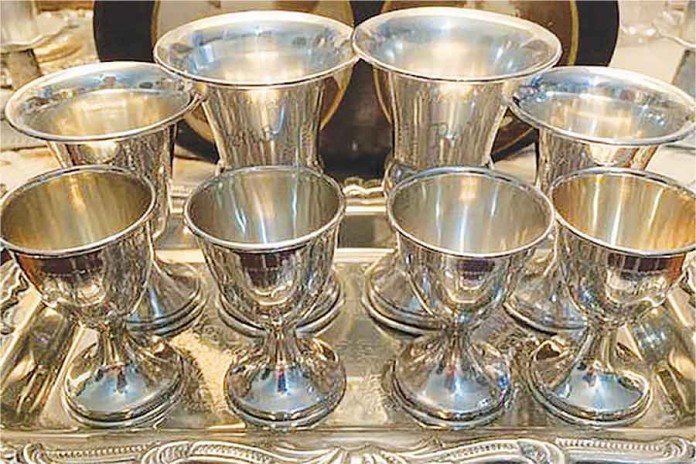 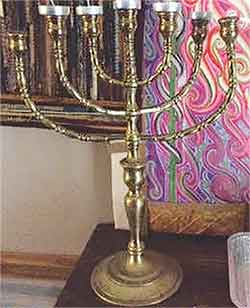 I was given a menorah from my mother when I got engaged. It is brass with gold cups, I’m told. She wrote a little story, which I’m pretty sure was just made up but could be true, that her grandmother was paid for her midwifery assistance with this menorah.


I’ve been using it for my Shabbos candles for 28 years now. I’ve wondered if it actually came from a church somewhere in Russia, or perhaps Latvia? The branches go straight across, but the last time I cleaned the menorah, it made them go zig-zag. The branches all rotate around the stem; the base and the cups screw apart. A kiruv rabbi said it was up to me whether to use it or not, so I have been using it. I grew up Reform and always thought my parents were Jewish. For sure my Dad is, but I wonder if a grandmother or great-grandmother wasn’t and/or someone stole this menorah from a church or who knows where. I’m curious about where it came from. What do you think?

Well, that’s quite a little story that your mother wrote, and from what I’m seeing in the photos, it could be true. I don’t think it originally came from a church. This form of menorah in the United States has been very popular since at least the 1920s; it seems like every other Jewish family on the East Coast owned one, but obviously it could not be put to use for Chanukah. Although I have seen more examples of this menorah over the years that I can count, I have only been able to confirm one family, in 1940s New York City, that indeed used this as a candelabra to light Shabbos candles. A total of five of the branches were lit by the woman of the house: two for the husband and wife and three for the number of children the couple had.

I am not familiar with European examples of this menorah, but I guess it is possible for there to be some. An in-person examination by someone knowledgeable in antique brass would be needed to determine if the threading on the screws were of the standard measured in inches, which would indicate an American origin, or in the metric system, indicating a European origin.

I can make out some nice details of the turning (those concentric circles you see), on the base, so from that alone I can safely assume you have a pre-war example, likely dating to the 1920s or 30s.

However, due to the vast number of examples, as I mentioned above, coupled with this not being sought after by anyone in the Judaica collectors’ market, if it is American, the value is only $5-$10. If, however, it does indeed hail from Europe (Polish or Russian origin is most likely), then as a European piece of brassware (not marketed as Judaica, and I’m not sure it ever legitimately could be), it would have a value of $30-$50. 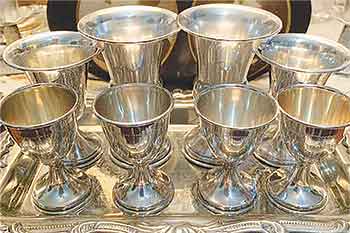 These eight pieces are sterling. The tray is from my next door neighbor who passed away. It has a mark and says silver-plated EP on steel.

I started the set with two black wine cups which I knew before polishing were made of sterling. About two years ago I found four sterling cups with Jewish stars and an identical piece to the two larger wine cups, only slightly smaller than them, in an antique store in New Paltz. My mom passed away in 2010 and her yahrtzeit was last week. A few days before that, I found a small antique store on Kings Highway that had an identical match to the middle-sized cup and it had the initials RB. My mom’s name was Ray Brickner, a”h. It was amazing to me that I completed the set a few days before her yahrtzeit with the identical match that had her initials. What do you think of this set?

Ah, you’re an antique hunter – much respect from another (me) to you! First, the tray: It actually holds no monetary value, as silver-plated steel trays (the EP stands for Electroplate) are not collectible and were made in the tens of thousands, if not more. As for the cups, I can see the “Sterling” hallmarks on them in the photos you provided, and most of them are typical for cups made in New York City for the Jewish market during the 1920s-40s. Those with Stars of David are worth $20-$30 a piece, while the other cups are worth $15-$20 each.

I am entranced by your fortuitous finding of a cup with initials engraved on it that match your late mother’s.

I inherited this small kiddush cup (l’chaim size) from my grandfather, OBM. It may have come from Russia. As you can see, in addition to some decorative designs on the sides, it has four different silver markings on the bottom.

Thank you for any information you can provide. 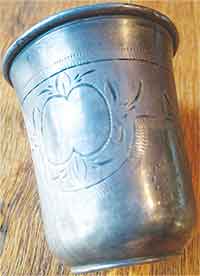 Yes, you are most certainly correct that your cup comes from Russia, as the hallmarks I see, including the “84,” are typical silver hallmarks for Russia circa 1890-1915. Based on the very small size that you’ve indicated in other photos, and the lack of any Hebrew engraving to solidify that this was indeed used as a piece of Judaica, as a secular Russian cup it has a value of $25-$35. 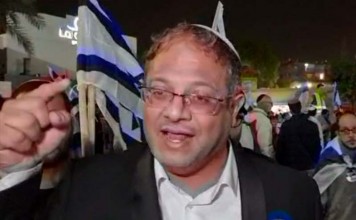 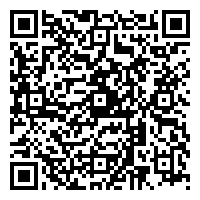