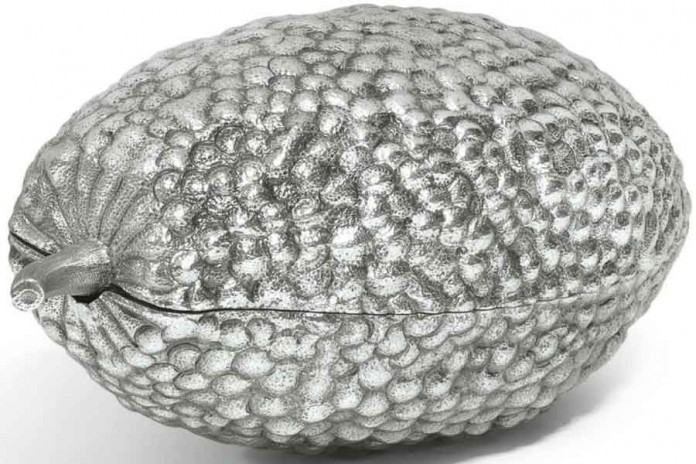 As we breathe a sigh of hopeful relief that our prayers were heard during the Yamim Noraim, we now focus our attention to getting ready for .

After we inspect an etrog to purchase, some of us will take the etrog and place it in a sturdy box so it can be kept safe from possible damage during the holiday. In the world of antique Judaica, it appears that containers made specifically for the purpose of holding an etrog is a rather late development, as the oldest verified etrog boxes (either cast in the actual shape of an etrog, or a box with a Hebrew inscription on it relating to ), date no earlier than the 18th century.

The oldest representation of an etrog itself is found on bronze coins minted during the First Jewish Revolt against the Romans, specifically those in the years 69 and 70 CE. In the photos shown, one side has an etrog, while the other side has two lulavim. The ancient Hebrew script around the etrog states “For the redemption of Zion,” and around the lulavim “Year four quarter” (meaning the coin was minted in the fourth year of the revolt, and the value of the coin is of a quarter of a shekel). Coins like this, when appearing for sale, can vary from a few hundred dollars to many thousands of dollars, as it all depends on the condition of the coin, and in some cases, the provenance. 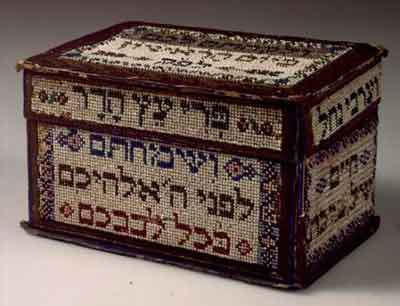 A personal favorite antique etrog box of mine is one that resides in the collection of the Israel Museum. The box is made of the most simple, basic material imaginable: cardboard. Atop the cardboard are hundreds of dyed glass beads on strips of cloth that were painstakingly placed in such a way to reveal colorful Hebrew words that relate to the Biblical commandment for the etrog, the name of the owner of the box, and the date, which is 1860. It is thought that this box was made in Germany. 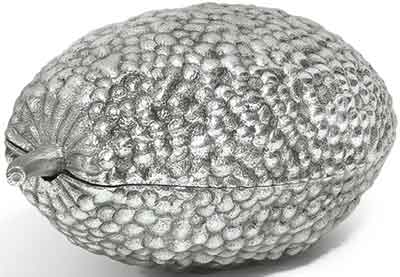 A silver container cast in the shape of an etrog sold at Sotheby’s in London last year for $15,000. It was made in 1851 in Glasgow, Scotland, which explains why the price realized was so high when compared to the estimate given by Sotheby’s, which was $4,000 – $6,000. Judaica made in countries where the Jewish population was very small, tends to be significantly more valuable than a similar item made in a country which has a much larger Jewish population. For example, if the Glasgow container was made in Germany or the Netherlands, it would sell in the $2,500 – $3,500 range. 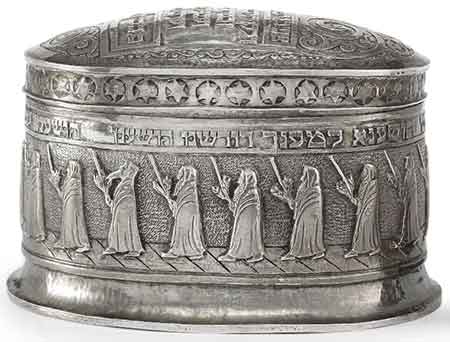 One of the most fascinating etrog boxes to appear for sale in recent years was at Sotheby’s in New York, in 2011. The title of the lot was “An Arts and Crafts etrog Container, circa 1925.” Given an estimate of $6,000 – $8,000, it sold for $18,750. I remember going to the sale to examine the box in person, and was amazed at the quality of the piece, as there was extremely skilled work made by hand in the silver which revealed beautifully executed Hebrew wording on the lid and around the box, as well as a procession of bearded men in talleisim holding the lulav and etrog.

Frustratingly, there were no hallmarks to be found on this box, which was surprising to me, as it was quite apparent that the box was made by someone who was a trained and very talented silversmith, and said maker would be proud to announce himself as the creator of the piece with his signature or monogram. The style of the Hebrew letters and decoration indicated a date of manufacture of the 1920’s or 30’s, likely by someone in Germany or the U.S.

Personally, I felt it could only be done by one of a handful of Jewish silversmiths in Germany that were producing Judaica of this quality at the time. Indeed, after the box was purchased, research by the buyer, the Judaica dealer Jonathan Greenstein, located a photograph of this very etrog box in a German newspaper from 1924! It was stated that it was done by Baruch Friedlander, a noted maker of Judaica, who fled Germany to Palestine in the 1930’s and continued making Judaica throughout the 1950’s in Israel. His German-produced Judaica pieces are extremely rare and highly desirable. His efforts in pursuing this etrog box, from the purchase itself to the research, made Mr. Greenstein the owner of a Judaica object worth substantially more than what he paid. 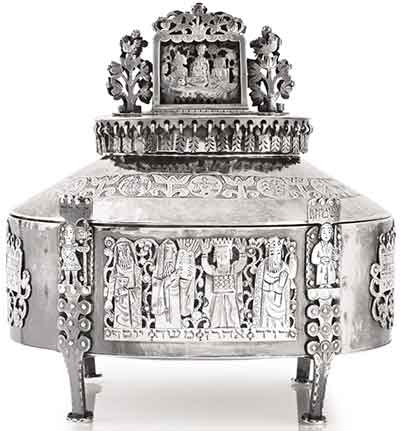 Finally, the etrog box that has achieved the greatest sum ever at auction may surprise our readers, as it is not an antique, nor is it from pre-war Europe. Given an estimate of $30,000 – $50,000 by Sotheby’s in 2013, the box sold for an astounding $93,750. This is because the silver box, made entirely by hand, was made and signed by Ilya Schor. Ilya Schor was an artist, painter, jeweler, engraver, sculptor, and maker of Judaica. Born in Poland in 1904, he trained at the Warsaw Academy of Fine Arts in 1930, and in 1937, he was awarded a grant by the Polish government to study in Paris, where he exhibited his works in a Salon in 1938 with success. He fled Paris in 1940, eventually making his way to New York City.

This etrog box, made in New York in 1956, features hand cut and engraved panels of figures from Tanach; Avraham, Yitzchak, Yaakov, Moshe, Aharon, Dovid. There is a man holding a Torah and a man holding a lulav and etrog, a boy with a kippa and payos holding a lulav and etrog and a girl holding a Simchas Torah flag. The lid features a fully-formed three-dimensional family scene flanked by birds. There are collectors just of works by Schor, and this was a rare opportunity: while some Judaica made by Schor, such as mezuzah cases, appear on the market from time to time, larger, elaborate pieces like this etrog box, do not. Silver works by Schor are so collectible that forgeries began appearing in the marketplace beginning in the 1990’s, so to any potential buyers out there, be careful.

Shana tova and chag same’ach to all. 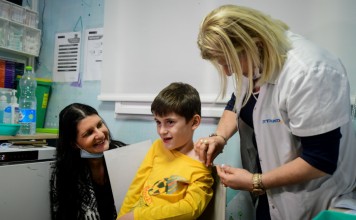 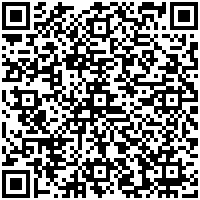