After the British conquered Eretz Yisrael and were awarded the Mandate for Palestine by the League of Nations, Herbert Samuel was appointed the first High Commissioner of Palestine. Three months later, in 1920, the Hebrew language was granted official status in Eretz Yisrael.

Nonetheless, British Administration policy was to transmit Hebrew telegrams using Latin characters because of “technical restrictions.” The British said using Hebrew letters in telegrams would be subject to future technical arrangements “to be determined.”

This delegitimization of Hebrew was not inconsequential. Hebrew was essential to the creation of a new Jewish national character, and the rebirth of Hebrew would establish a critical connection between the anticipated Jewish state and ancient Israel. Moreover, the British refusal to use Hebrew characters in telegraphs violated Mandate law, specifically an “Order-in-Council” that barred prejudice against any of the country’s official languages. Article 22 of the British Mandate Charter provided that “English, Arabic, and Hebrew shall be the official languages of Palestine” (emphasis added).

Suggestions that “technical arrangements [needed] to be worked out” were sheer nonsense because telegrams were submitted via Morse Code and written down by an operator. Telegraph operators simply needed to be trained to write in Hebrew. In fact, several Jews had already been well-trained as telegraph operators in a school that had opened in Eretz Yisrael for exactly that purpose. Additionally, a Hebrew telegraph code had been developed by Israel Amikam, an employee of the Palestine Department of Posts and Telegraphs (and later a Haifa lawyer), who went on to fight – virtually single-handedly – to introduce Hebrew characters to the country’s telegraph system.

Amikam persisted in his battle in the face of unyielding opposition and pressure from his supervisors at the Department of Posts and Telegraphs to drop his efforts, including threats to force him to resign his position. On October 6, 1922, he published the first in a series of articles in Ha’aretz designed to galvanize public outrage about British discrimination against Hebrew. When his direct appeal to Postmaster General Lt. Colonel William Hudson failed, he turned to the High Court of Justice in Jerusalem, but the Court ruled that there was no discrimination involved because a Hebrew telegram “transmitted in Latin characters does not cease to be Hebrew.”

In an August 12, 1929 correspondence sponsored by the Jewish National Council and the Vaad Halashon (Hebrew Language Committee), Amikam argued that the British were violating their own Mandate rules and that there were no longer any “technical issues” that prevented transmitting telegrams in Hebrew. He further cleverly reasoned:

If a citizen of Palestine sent an English letter, which the court asked be sent in English, in Hebrew characters, such a man would be regarded as fit only for the madhouse… [A]s the Government could not refuse to protect the life of a Hebrew citizen in the National Home, so the Government cannot abrogate the right of the Hebrew language.

In reply, the British Secretary essentially took the same position as the High Court, claiming that Hebrew, though written in Latin characters, is still “Hebrew”: “A message in Hebrew does not cease to be in Hebrew because it is rendered in Latin characters, any more than a message in English ceases to be English because it is rendered in Morse Code.”

However, as Benjamin Arenstein insightfully writes in Scripted History: Hebrew Romanization in Interwar British Mandate Palestine, this comparison is wholly inapt and, indeed, disingenuous because an English message will only remain in Morse Code form for a brief time; it will ultimately be reproduced using Latin letters. Were the British Secretary’s analogy to hold, the Hebrew message would exist only temporarily in the form of Latin characters before being transcribed into Hebrew – which, of course, was not the case.

While the Vaad Halashon and others supported Amikam’s letter to the British and sought financial support from the Zionist Organization, the response was, at best, lukewarm; the Zionist organization said it was “working on it” but could not commit funds in support of the appeal of the 1929 effort. Although Amikam met with great success in garnering broad public and institutional support for his campaign and many signed on to his petition, he encountered great public apathy when it came to providing actual funding to cover his considerable expenditures.

Many local councils, while continuing to express their appreciation for his work, maintained that the Hebrew telegraph matter was a “national” issue best addressed by national Zionist institutions. As Liora Halperin aptly summarized the situation in Babel in Zion, “support for Hebrew telegrams, though vocally expressed, turned out to be more a collective posture taken for political reasons than a deeply held commitment.”

This is perhaps best illustrated by the response of Colonel Frederick Kisch, head of the political department of the Zionist Executive, who argued that: (1) the Yishuv should not be expending valuable political capital on this issue; (2) pushing for the use of Hebrew in this context would provide only a very limited benefit because Hebrew could be used only for messages sent inside Eretz Yisrael given that virtually no one outside the land could recognize Hebrew telegraphic code; and (3) in any event, the inclusion of Hebrew as a telegraph code would have little to no impact upon the ultimate goal of transforming Hebrew into the universal language of all Jews.

After repeated additional entreaties to His Majesty’s Government failed, Amikam made a personal appeal to Colonel Josiah Wedgwood IV during the latter’s visit to Eretz Yisrael in 1930. During his WWI service, Wedgwood had met Zion Mule Corp. volunteers commanded by Joseph Trumpeldor, which had transformed him into a lifelong friend of Zionism and Zionists; after the war, he bitterly criticized the 1920 British partition of Eretz Yisrael, and he continued throughout his life to challenge British bias against the Jews of the Yishuv. When he proved unable to help Amikam, the latter decided to petition the League of Nations in May 1931.

The petition yielded a measure of success. On January 25, 1932, the League adopted the following resolution:

The Commission trusts…that the Mandatory Power…will re-examine the question…in order to ascertain whether the technical and financial difficulties, which have hitherto prevented the Administration of Palestine from allowing…transmission [in Hebrew] still prevail. The Commission will be glad to have information when the question has been definitively settled.

The British ignored the directive from the League of Nations, instead adopting a deep stalling tactic. After many months, a frustrated Amikam wrote to High Commissioner of Palestine Arthur Wauchope, who agreed to a meeting. Amikam was encouraged by Wauchope’s obvious interest and his promises to look into the matter but when, yet again, no action was taken, he rededicated himself to organizing public protests.

At his urging, the 18th Zionist Congress in Prague adopted a resolution advocating the use of Hebrew characters in telegraph transmissions, and the Zionist leaders at the Congress signed his petition to the British Mandate Government to that effect. Still, there was no action taken by the British, and Amikam prepared to return to the League of Nations to seek enforcement of its order.

Suddenly, after a long and difficult struggle, he finally succeeded. On December 13, 1934, Wauchope advised Amikam that a determination had been made that there was no longer any impediment to “initiating experiments for the transmission of telegrams in Hebrew script” inside Eretz Yisrael, and that telegrams would be accepted in Hebrew at 21 population centers as of January 1, 1935.

The first Hebrew telegram ever sent was from Amikam to the editors of four Tel Aviv newspapers – the first word was “shehechiyanu” – and he received the first Hebrew congratulatory telegram soon after from Tel Aviv Mayor Meir Dizengoff. 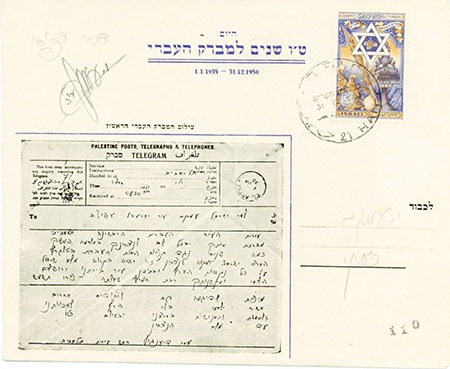 Exhibited here is a beautiful Israeli cover with a Haifa cancellation dated December 31, 1950 commemorating the 15th Anniversary of the Hebrew Telegraph System, which is originally signed by Amikam. It includes a decorative cachet of Dizengoff’s first Hebrew telegram: “The Municipality of Tel Aviv heartily congratulates you on your great success in the battle you have waged for many years against the discrimination against Hebrew in the Palestine telegraph system.”

Amikam’s singular role in this victory might best be summarized by Sir John Shuckburgh, head of the Eastern Department of the British Colonial Office and Deputy Under-Secretary of State for the Colonies, who characterized Amikam as “obsessed” and declared that “it is only this man who rouses others to sign petitions on the subject.” 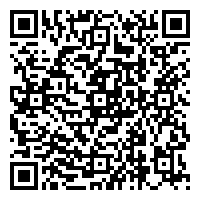