Eretz Yisrael has always been at the critical geographical intersection of trade routes connecting east and west – and that is no less true in this age of worldwide interconnectivity and intercontinental aviation.

The first planned flight to Eretz Yisrael, which left Paris on October 21, 1913, crashed at the foot of the Taurus Mountains on November 26, 1913. The first flight to successfully land in Eretz Yisrael was flown by French ace Jules Vedrines who, participating in an international competition to fly from Paris to Cairo, departed Paris on November 1913 and, after landing in Istanbul and then Beirut, departed for Eretz Yisrael on December 27, 1913.


He intended to land at the first “International Airport in Palestine” at Mikve Yisrael near Tel Aviv, but when strong winds forced the plane off route and he found himself lacking sufficient fuel to compensate, he made a forced landing on the beach at Jaffa, damaging the plane’s undercarriage.

The damage was easily repaired and Vedrines landed at Mikve Yisrael the next day, where he was greeted by a massive celebratory crowd. Taking off for Cairo the next day, he promised to land in Jerusalem upon his return, but on December 31, 1913, two other French pilots, Mark Bornier and Joseph Bernie, became the first to land a plane in Jerusalem.

During WWI, the Ottoman Empire, then in control of Eretz Yisrael, joined Germany in its battle against the British, French, and Russians. In early 1915, it waged a military campaign in the Sinai Peninsula to conquer the all-important Suez Canal, but British aircraft, virtually unopposed (the Turks lacked planes of their own), tore the Ottoman forces to pieces.

Learning from this bitter defeat, Turkish and German commanders moved a force of 14 German aircraft, which were superior to the British planes, to Eretz Yisrael. The German squadron positioned itself in Be’er Sheva in April 1916, and the aerial war intensified in 1917-18, when both sides sent new and advanced aircraft to the front in Eretz Yisrael. And for the first time, aircraft were used in war not only for direct military combat, patrols, and bombing missions, but also for strategic aerial photography.

At the end of WWI, the victorious British found themselves with an abundance of surplus military aircraft, which they converted for civilian use. This led to the first regular civilian airline operation to Eretz Yisrael with the British founding of Imperial Airways in 1924. Its first air routes connected London with the British Empire, and regular flights between London and India via Eretz Yisrael commenced in March 1929.

On October 21, 1931, the British launched a route to Eretz Yisrael involving a seaplane landing on the Kinneret. Passengers were transferred via rowboat to Tiberias, from there they traveled by car to the Tzemach airfield on the southern shore of the Kinneret and then by plane to Baghdad. (The primitive Tzemach airfield, one of the first in Eretz Yisrael, had been built in 1917 for military use by the Turks, with German assistance.)

However, after a seaplane crashed due to inclement weather in 1942, Kinneret landings were discontinued and the seaplanes landed instead on the Dead Sea or in Haifa Bay.

The idea for an independent Jewish air force “took flight” when the Jews of the Yishuv, who were challenged by steady Arab attacks, took notice of the RAF (the British Royal Air Force) in defeating and curtailing Arab attacks against British targets. Jewish leaders determined that owning their own aircraft and training their own pilots would free the Jews of Eretz Yisrael from having to rely on the British and facilitate their ability to defend themselves.

In the 1920s, Yisrael Shochet attempted to establish an aviation school and simple air service within Eretz Yisrael, but he lacked financial resources and, in any case, the British authorities refused to give him permission to do so. Tzvi Nadav shrewdly figured out that, notwithstanding the British rebuff, Jews could become involved in aviation by learning to fly gliders, which the British permitted as a “sporting activity.” Accordingly, he went to Paris in 1927 to study aeronautics in general and gliding in particular, hoping to implement what he learned upon his return to Eretz Yisrael. 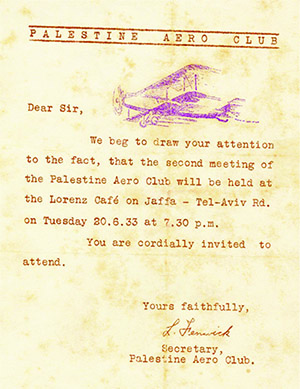 On the very rare undated correspondence on Palestine Aero Club letterhead exhibited here, the Club Secretary (L. Fenwick) writes: “We beg to draw your attention to the fact, that the second meeting of the Palestine Aero Club will be held at the Lorenz Café on Jaffa – Tel-Aviv Rd. on Tuesday, June 20, 1933 at 7:30 p.m. You are cordially invited to attend.”

In the early 1920s, the development of mass interest in aviation became an important goal of the Yishuv, and the Jews of Eretz Yisrael began to join aero clubs and attend aviation exhibitions. The new post-WWI wave of Jewish immigrants from Europe included some who had been active in aviation in Germany and Poland and who could be recruited to help develop the Yishuv’s aviation capacity.

In March 1933, Jewish aviation aficionados led by Shochet and Nadav established the “Flying Camel Club,” which promoted aeronautical studies, aircraft modeling, and, at Nadav’s initiative, flying gliders. (The “Flying Camel” was also the official insignia of the Levant Fairs held in Tel Aviv.)

The Palestine Relief Committee, which was organized to relieve attacks against the Jews of Eretz Yisrael, formed “the Aero Club of Palestine” to “provide funds to purchase and ship to Palestine at least 100 planes for the colonists there.” Funds were collected for “an aviation field and training school, with the purpose of developing well-trained Jewish aviators in Palestine.”

Pilots were trained on single-engine light planes, an activity that commenced at the Palestine Flying Service, which operated three light planes. In 1934, the Haganah and other Jewish institutions in Eretz Yisrael purchased their first aircraft.

The Second Maccabiah (Jewish Olympic) Games, which were held in Tel Aviv in April 1935, included flying competitions, and a group of Jewish fliers arrived from Germany with two German-built gliders. One of the Maccabiah athletes, Ernst Rappaport, was also one of the best glider pilots in Germany.

After the Maccabiah Games, the Germans left both their gliders and Rappaport, who settled in Eretz Yisrael, became a key aviation instructor, and commenced glider training at Mount Carmel in Haifa in 1935.

In autumn 1934, Yitzchak Chizik, who had completed his aviation studies in London, succeeded in persuading Ben-Gurion and Dov Hoz, a founder of the Haganah and a key organizer of the Jewish Legion, to set up a flight school in Eretz Yisrael, but they declined to appropriate funds to purchase a plane, which funds, they said, could not be diverted from the purchase of arms for the defense of the Jewish settlements.

When Chizik ultimately received British approval for the purchase of the plane – no mean feat, given general resistance by the British government, which feared that an independent Jewish force might encourage a similar Arab force – the funding was approved.

That fall, at a gathering in Warsaw of Jewish leaders supporting increased immigration to Eretz Yisrael, Ben-Gurion is reported to have proudly whispered an aside that “we even have our own very first airplane.” When the first Jewish civil aviation company, the Aviron Palestine Aviation Company, commenced operations in 1936, its first plane was that very Tiger-Moth, which was later destroyed when it crashed at Afikim Kibbutz in the Jordan Valley on March 17, 1938; fortunately, both the pilot and the flight student survived.

In December 1934, Pinchas Rotenberg, who had built the first hydro-electric power station in Eretz Yisrael in 1932, registered “Palestine Airways, Ltd.” (a subsidiary of the British Imperial Airways), the first commercial airline in Eretz Yisrael, and the company commenced operations with daily service from Lod Airport to Haifa in August 1937. Rotenberg deferred the goal of Jewish aviator training and aviation defense in favor of affiliating with British authorities and obtaining their technical assistance and support.

Later in 1937, flights commenced to Beirut, thereby inaugurating Palestine Airways’ first international service. During WWII, the airline ceased operations and its planes were seized by the British Royal Air Force in 1940 for use in its war effort as transport and communication aircraft.

The Aviron flight school, founded in March 1938, was led by Jewish pilots Ernst Rappaport and Emmanuel Zukerberg (Zur), who became the head pilot and instructor, respectively. The school operated out of the attic of a cowshed at Degania Alef, utilized a hangar at Ashdot Yaakov, and used a makeshift airstrip at Afikim.

The first 11 Aviron graduates earned their pilot licenses in 1939. After merging with the Palestine Flying Service and acquiring more aircraft, Aviron graduated a greater number of licensed pilots per year for a total of 95 by 1942.

Aviron, which was established by the Jewish Agency and the Histadrut at the peak of Arab rioting against the Jews of Eretz Yisrael, was also unofficially supported by the Haganah. Its official goals included training Jewish pilots and establishing a system of internal air service between Tel Aviv, Haifa, and Tiberias, but its unofficial goals included aiding the Haganah in secret reconnaissance and national defense missions, including fighting Arab marauders, protecting road construction workers, and airlifting supplies to remote settlers in Eretz Yisrael.

After WWII and in the years leading up to the birth of Israel, Aviron collaborated even more heavily with the Haganah, whose elite wing, the Palmach, established Palavir, an air platoon, in 1943. Aviron trained Jewish pilots, maintained internal air passenger services and, by November 1946, graduated 108 students who obtained their official pilot licenses.

The Palestine Flying Service opened at Lydda Airport with the approval of the British authorities in 1937; however, the British were unaware that when the Service commenced pilot training in April 1939, it was also training members of the Irgun, an anti-British Jewish underground organization.

Although Aviron conducted its clandestine Haganah training in the secluded Jezreel Valley, the Palestine Flying Service operated in plain sight of the British authorities. The first graduating class, which gathered at an impressive April 21, 1939 ceremony at Lydda, presided by British High Commissioner Harold McMichael, became the first Jews to earn pilot licenses in Eretz Yisrael.

The Israeli Air Force has its origins in Aviron. In 1940, Palmach ground units were established to help defend Eretz Yisrael from possible invasion by Axis forces and later, in 1945, with a looming Allied victory, the Haganah set up the Palmach Flying Platoon, and Aviron taught Palmach members to fly.

However, when it became evident that Aviron could not absorb all the Jewish aviation professionals in Eretz Yisrael who had served with the Allies, it transferred ownership of virtually all its planes in November 1947 to the newly-founded Sherut Avir (“Air Service”), an illegal and clandestine Jewish air force.

When Israel was founded in May 1948, Sherut Avir had 25 aircraft; these became the Israeli Air Force, which played a vital role in the nascent state’s success in its War of Independence.

After the war in November 1948, Israel essentially transitioned Aviron into its national airline, El Al, which has become one of the largest and most modern air forces in the world and is today well-recognized as the world’s most secure airline. 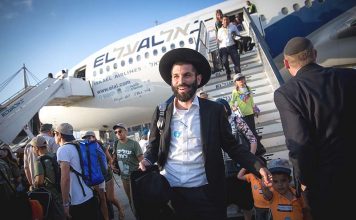