In his autobiography, My Life, Marc Chagall (1887-1985) recounts a pogrom he witnessed in Russia in 1917. He relates that he was caught alone on a street by a gang of five looters who demanded; “Jew or not?” That question haunted him and his art his entire life.

Marc Chagall is easily the most conspicuous Jew in the multi-ethnic pantheon of famous 20th century artists. And yet he paradoxically resented being labeled a “Jewish artist” even as he maintained, “If I were not a Jew, I wouldn’t have been an artist, or I would have been a different artist altogether” (1922). The hypothetical question, “Jew or not?” profoundly colors how his work is understood. Many critics and writers choose to see Chagall as a naïve universalist, creating a dream world of modernist color populated by floating lovers and flam-

boyant bouquets of flowers. Conversely, Jean- Michel Foray, the curator of the current retrospective at the San Francisco Museum of Modern Art and director of the Chagall Museum in Nice (Musee National Message Biblique Marc Chagall) insists upon the uniquely Jewish nature of Chagall’s artistic concerns.

The Jewish/Biblical connection is immediately evident in the organization of the exhibition and its excellent catalogue. The curator has chosen a predominately Jewish theme with an unusual focus on Chagall’s Biblical work. There is a general chronology reflected in these chapter headings; 1) Russia – France – Russia, 2) The Jewish Theater in Moscow, 3) France – America – France, 4) The Bible.

This choice of subjects is seen in the context of his catalogue essay that emphasizes Chagall’s consistent rebellion against the modernist orthodoxies of his youth. “Three times Chagall would refuse to adhere to an avant-garde movement: in 1912 he did not become a Cubist; in 1919, though close to Kazimir Malevich and El Lissitzky, he did not become a Suprematist or a proponent of abstraction; and in 1924, when Max Ernst and Paul Eluard proposed that he join the Surrealists, he declined to do so.”

Curator Foray explains that this was done; “…from his will to affirm his own identity and autonomy. […] Such an attitude can be understood as intrinsic to Chagall’s Jewishness. […] In his art it may be seen as an affirmation of his identity, but its context is social, linked to his experience as a Jew in a Christian society.” This is not, however, to say that the exhibition presents these Jewish aspects idyllically. Rather, the exhibition coolly examines the complex and frequently contradictory nature of much of Chagall’s oeuvre.

The 1960 pen and ink drawing, “Moses” reveals one salient aspect of Chagall’s Biblical method. The image is of a man wearing tallis and tefillin lifting up the Torah in the ceremony of hagbah. The tension lies in the anachronism of a contemporary image visible in any synagogue today blithely assigned to Moshe Rabbeinu. The link across time emerges in the faint outline of the two Tablets visible in the unrolled Torah. For Chagall, the Biblical is constantly intertwined
with the contemporary Jewish world.

In his later years, Chagall was accused of lapsing into a maudlin sentimentality. Nothing could be farther from the truth. Expanding upon the 105 etchings he did illustrating The Bible in the 1930’s (finally published in 1956), Chagall executed a cycle of 17 large Biblical paintings from 1955 until 1973 that became the core of the Museum of the Biblical Message. They were bequeathed to the French National Museums in 1982. In The Crossing of the Red Sea (1955) the Israelites are led by a graceful white angel crossing through the sea as they move towards the top of the canvas. They are pursued by a crimson mob of Egyptians while a chrome yellow Moses confidently guides the entire narrative.

Moses is possessed by a sense of foreboding as he dominates the lower left, locked in a red/ yellow dialogue with the Egyptians while the Jews escape upward in a white and blue vision of the future. That future is intimated in the shadows above the horizon with images of King David and, surprisingly, Christianity looming ominously on either side of the angel. Chagall’s Crossing is trapped between the liberation of the people, the fate of their beloved leader, and the triumphs and tragedies the future will hold.

Chagall’s mastery of symbolic narrative is shown again in The Flayed Ox (1947). This painting was created in the immediate shadow of the Holocaust drawing upon his memories of his beloved grandfather the shochet detailed in My Life many years earlier. Here, however, the image is obsessed with the bloody flesh of the beast lapping its own blood. The shochet floats helplessly above the decimated shtetl, flames licking the background, as he envisions a legacy of blood and violence perpetrated upon the Jewish people.

Israeli President Israel Zalman Shazar’s Yiddish poem demands that we “Look closely at the red, flayed calf, hanging as a crucifix over the whole city. As the true crucified, the father of all the crucified in the world, since the evil of a living creature wielded its power over a living creature. See how the red of its blood screams…” The essence of Chagall’s Jewishness is neither sentimental nor nostalgic.

Time Is A River Without Banks (1930-39) climaxes Chagall’s use of metaphor as he sums up a decade of tumultuous decline for the Jews of Eastern Europe. The images of a winged fish playing a fiddle atop a grandfather clock that floats over the river running through his hometown Vitebsk appear surreal and puzzling. And yet, the gravity with which they are depicted, hovering over lovers on the riverbank, commands our attention and invites us to speculate as to what it may mean.

Doesn’t Shabbos, nurturing, guiltless and easily represented by the fish, continue to play the tune that time itself is forced to follow in Chagall’s precious hometown? Yet the sky is stormy and the fish’s wings seem to be on fire as the colors foretell danger to the timeless life of the people and their Russian home.

It is important to remember that Chagall witnessed World War I and the Bolshevik Revolution while in his native Russia. He stayed on long enough to become commissar of fine arts in the Vitebsk region. He finally left and settled in Paris in 1924. In 1941, he was forced to flee the Nazis and found refuge in New York where he stayed until the end of the war. He returned to France finally in 1948. Needless to say, he was never isolated from the terrible suffering of the
Jewish people in Europe. Chagall was born in Vitebsk in 1887 into a religious middle class family with Chassidic background. He studied at cheder but soon after bar mitzva began to be interested in making art and, according to his autobiography, My Life, grew resentful of the demands of Yiddishkeit. In spite of these tensions between the traditions of his fathers and his independent artistic nature, Jewish subjects and symbols permeate his works.

The Wedding (1910) is one of his most adventuresome early paintings. The bold use of primary colors to indicate sky, rooftops and figures integrates all seamlessly into the composition. The totality of the composition reflects the unity of his conception of a modern couple’s marriage in a totally traditional setting. A milkman is seen joining the wedding procession of traditionally clad villagers as the couple is led down the street by a klezmer band. On the far right the couple is ushered into the epitome of middle class aspirations, a door labeled in Russian, “Small Store.”

There is much in this splendid retrospective of 146 works I have not mentioned. All Chagall’s themes and works deserve comment and analysis: his beloved wife and inspiration, Bella; the extensive murals and drawings for the Jewish Theater in Moscow; the series of gouaches illustrating the classic French “Fables of La Fontaine”; his fantastic paintings of people and animals; the etchings illustrating the Bible; and the puzzling series of crucifixions he painted throughout his life as a means of expressing Jewish suffering. Space prohibits proper attention
to this fascinating array of artworks.

In the final analysis, Chagall’s Jewish aspect still remains the most salient because in his 70 years of intense creativity, he was the only major modern artist to create significant works about Jewish and Biblical subjects. He never abandoned his identity. For Chagall the answer to the question “Jew or not?” as expressed in his art, was always, “I am a Jew.”


Richard McBee is a painter of Torah subject matter and writer on Jewish Art. Please
feel free to contact him with comments at www.richardmcbee.com.
Advertisement 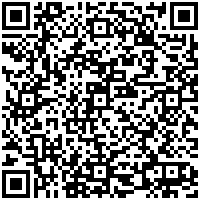