The Big Gorilla that is not hiding in any room here at the Presidential Conference is Iran. Most of the main speakers have come to tell Israel what it should, or should not, do about Iran. Dennis Ross seems to believe that it is acceptable to give Iran nuclear capabilities so long as we can ensure that it will only use the nuclear power for civilian uses. Sure, that’s going to work for how long, I want to ask him?


Dennis Ross says that there is simply no way that a military strike against Iran will be successful…and again, I want to ask him how he knows…and even if he does know…do we have another option?

It is, quite simply, ridiculous. The Jordanian and Egyptian journalists offer suggestions – Israel should do the right thing, though how they define the right thing would certainly not be as we would. The Turkish diplomat (yes, I’ll go at some point and post their names) wants Israel to know that it isn’t too late and we certainly can repair the relationship with Turkey. All we have to do is apologize.

After all, he says, Turkish civilians were hurt and killed. Civilians? Hardly…Apologize? Um….no.

The most realistic and helpful comments on Iran came today from Gabi Ashkenazi. He says that the military option is and should be the last option and yet it must remain on the table because if other options are to succeed, the only way it can succeed is if the threat of military action remains.

In fact, Ashkenazi explains, the more the threat of military intervention is on the table, is considered real, the more likely all non-military responses can work. It’s such a logical and simple reality – one that so many of those who have come here for a few days to preach to us want to ignore.

The big gorilla at this conference is Iran – I doubt that those who came here to give advice are managing to notice that we here in Israel do actually understand what is happening with Iran, understand very well, as Dennis Ross felt he had to tell us, that we have to be concerned not only with the strike itself, but the day after the strike.

My advice to the many guests here at the conference – trust us. Really, trust us. We are very aware. We live here, here in the reality that is the Middle East. 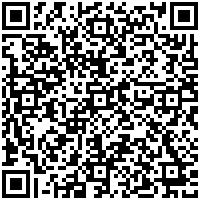