On October 4, 2003, 10-year-old Oran Almog was sitting with his family at the Maxim restaurant in Haifa, when a Palestinian Authority terrorist, disguised to look pregnant, blew herself up killing 21 people, including Oran’s father Moshe, his grandparents Zev and Ruth, his brother Tomer and his cousin Assaf.

Oran, his mother Orly, sister his Adi, and his aunt Galit were all seriously injured. Oran lost his eyesight and has spent years in in rehabilitation treatments. The family of the suicide bomber — Hanadi Jaradat — and her accomplices who were arrested and imprisoned, continue to receive monthly payments from the Palestinian Authority government until today.


Oran joined Israel’s Ambassador to the United Nations, Danny Danon, in speaking out against these ‘pay to slay’ terrorist salaries, before the members of the UN Security Council.

“The Security Council is holding a discussion on the Middle East, but one of the most important subjects, the funding of terrorism by the Palestinian Authority, will remain outside this discussion,” Almog said in remarks at the United Nations.

“The Palestinian leadership is paying salaries to terrorists and their families every single month. Anyone who believes in the value of human life should act against these payments,” Almog said.

Speaking at the Security Council, Danon added, “The murderous attack in Halamish (last Friday) did not happen in a vacuum. This terrorist committed a heinous crime following rampant, relentless calls by Palestinian officials inciting violence. It is no secret that the Palestinians have built an industry of incitement.

“The family of the terrorist from the Maxim restaurant has earned tens of thousands of dollars in payments for her crime. Her two accomplices have earned over half a million dollars in terror payments from the Palestinian Authority.

“Oran is here with us today,” Danon pointed out. “He is a true hero and a true model for the appreciation of life, while the Palestinian Authority pays the salaries of convicted murderers. How many more innocents will be murdered? How many thousands of dollars will the Salomons’ killer be rewarded before the world acts?”

Beginning last Friday, literally within hours after slaughtering three members of the Salomon family and seriously wounded a fourth family member, 19-year-old Omar al-Abed began earning a monthly salary of approximately $3,000, as as reward for his actions from the Palestinian Authority government.

Over the years, despite publicly claiming to seek peace, the Palestinian Authority has continued to pay monthly salaries to convicted terrorists, and the families of terrorists who have died while attacking innocent people.

In 2016 alone, the Palestinian Authority spent more than $300 million on terror payments, more than seven percent of the annual budget of the Ramallah government. 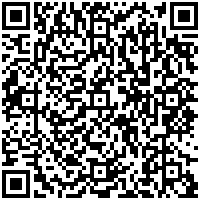