Many visitors to the Ein Keshatot national heritage site in the Golan Heights were perturbed by the sight of a monument promoting a Christian missionaary agenda that was donated by Curt Landry and his network of ministries.

The statue has three symbols: a menorah, a Star of David, and a fish – the latter being a Christian symbol. Engraved on a stone at the base are the words: “This symbol of the One New Man represents the friendship and brotherhood between Christianity and Judaism. Our shared love for the God of Abraham, Isaac and Jacob.”


Yet the ‘One New Man’ theology in fact represents a merging of Christianity and Judaism and a blurring of the differences rather than a friendship between the followers of two different faiths.

“The Jesus fish is a very ancient symbol, much older than the cross, to represent Christianity. The fish symbol was used and continues to be used because the word for a fish is an acronym in Greek. The Greek word is ‘ichthys,’  which is an acronym for ‘Jesus Christ Son of God Savior.’

“Missionaries won’t use the term ‘Jesus Christ.’ Rather, they say ‘Yeshua’ in order to enable evangelism.

“So, the Jesus fish was an ancient Christian secret message, like a dog whistle, to convey that this is really Christianity, and it has become very popular in the last 40 years as the growth of the messianic movement emerged,” Singer explained.

“Blending the fish – which seems innocuous at first glance but actually conveys Jesus Christ and Son of God, meaning Divine and the only savior – with the Star of David is precisely what missionaries do to blur the distinction between Judaism and Christianity in order to lure Jews who otherwise would resist…

“And that lends itself directly to the One New Man or New Humanity theology that’s in the Book of Colossians [the 12th book of the New Testament written by the apostle Paul],” Singer said. “It’s designed to create a melding of Judaism and Christianity. But theologically, it’s Christianity.”

“When Michael El-Kohen was on Morningstar Ministries, he talked about this in his interview,” Singer continued, referring to Michael Elk, who immigrated to Israel using the last name El-Kohen, presented himself as an Orthodox Jew and ensonced himself in the community…

“The reason they’re so interested in converting Jews is they believe the Jews alone, through conversion, will bring Jesus’ Second Coming.”

Furthermore,”what’s going on in Israel doesn’t go on in any other country in the world. Meaning that nowhere else in the world are synagogues working with missionaries. Jewish community centers don’t have a working relationship with evangelical Christians. It’s only going on here in Israel. We have the evangelicals so deeply ensconced in government…and that clout only exists in Israel. They’re targeting us.”

The missionary organizations are pro-Israel and donate serious money to worthy causes in the country as well as providing political support, including in Judea and Samaria. Many have turned a blind eye to their missionary activities because of this support.

“One of the reasons I made Aliyah [immigrated to Israel] more than three years ago is that I realized the problem is such a cancer,” Singer said. “I came on a speaking tour to Israel and saw the situation.”

Another reason that missionaries have had success in the Jewish state – there are roughly 200 messianic “synagogues” across the country – is that most Israelis have no understanding of Christianity and are unaware of the the symbolism, including a seemingly innocent carving of a fish. However, some visitors to Ein Keshatot who saw the monument did comprehend the meaning behind it and protested to the Golan Regional Council.

Ellen Horowitz, a writer and consultant on the Israel-Evangelical relationship who lives in the Golan Heights, investigated the situation and told WIN what she discovered.

She asked the artist, Sam Philipe, who is known for his sculptures of biblical and New Testament figures, why the enormous area around the statue had been cleared of all rubble, and “he said it’s going to be a parking lot.”

“So, the first thing visitors to the national heritage site will see is a messianic symbol,” she said.

Most Israelis do not grasp the Christian symbolism, she said. Also, “Curt Landry is giving a lot of money all over the place in Israel, and obviously it increases his influence…he gives a lot to the IDF, to hospitals – all good causes, but he’s definitely an active missionary.”

Horowitz believes that the Golan Regional Council members were tricked into accepting the statue as a gift, unaware of the “sinister” scheme.

“They now recognize there’s a missionary intent behind the sculpture. They were duped. There’s a real toxic agenda behind it, to break down the barriers between Judaism and Christianity.

“It’s a convoluted mess. It was very good people in the Golan Heights – religious, secular, across the political spectrum – who pressured the Council.

“But even if they had put up a friendlier, kinder, gentler monument, the collaboration between the Council and a missionary organization is there,” she lamented.

Horowitz becomes incensed by people who accept money from those who “cross red lines” and allow “a blatant affront to the Jewish people and to Torah and to the Land of Israel.

“That’s really what’s happening here. When something so wrong like this happens, people have to be honest and transparent and say, ‘You can’t go there Mr. Landry, Rabbi, Pastor – whoever you are. You’ve just crossed a red line that cannot be crossed.’”

“B’nai B’rith has been fighting against missionary activity in the Land of Israel since 1888, B’nai B’rith World Center-Jerusalem director Alan Schneider told WIN.

“Proselytism targeting Jews, including through attempts by missionaries to disguise themselves and their faith as Jewish, represents one of the major historic and continuing threats to the continuity of the Jewish people and its religion, Judaism. Jews are broadly united in seeing such practices – including when accompanied by ostensible acts of support for vulnerable and needy Jewish populations – as hostile,” Schneider said.

“Unfortunately, Curt Landry is among those promoting a ‘Messianic Judaism’ in which Jews effectively adopt Christianity. Over recent years, some professed friends of Israel, utilizing both largesse and deceptive tactics, have overseen an alarming escalation of efforts to infiltrate and win converts in Israeli Jewish communities. The public placement, next to the ancient synagogue at Ein Keshatot, of a Messianic monument tied to Landry is just one especially brazen signal of this intensified evangelism.”

Looking for a ‘suitable’ location

WIN asked Council spokesperson Limor Holtz on Tuesday where the statue would be relocated. “I don’t know where the new location is, it’s yet to be determined” she said,” adding that “it was not the Golan residents who were bothered by it…

“We didn’t have a full understanding of what the statue means when we got the request to put it there, but for now it’s covered.”

As of Wednesday afternoon, the covering is removed to reveal the missionary message. (Anonymous)

In fact, while the statue has not yet been removed, it was completely draped for some time, as seen on photos sent from observers on Tuesday. As of Wednesday afternoon, however, the engraved base with the writing about One New Man is uncovered and clearly visible.

It will be up to those in collaboration with the artist and the donor to find a location, but “not a heritage site,” Holtz said. “I cannot speak on behalf of anybody else, but I noticed there were conversations about getting a new location that everybody is going to be happy about.”

Asked whether it could be problematic to put it anywhere else in the country other than at a church or some other Christian site, she said , “I’m not sure. We’re still looking into it.

“We didn’t know until a few days ago that somebody got offended by it, and now we are looking for a place that’s going to be suitable for everybody. It will take a little time, but I guess a solution will be found.”

{Reposted from the WIN site} 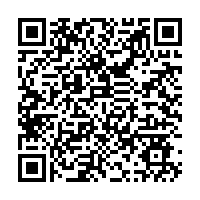