Somehow I clicked on a link and got myself to the newsfeed of a man from Yemen, who was, not so surprisingly, against Israel, against our having nuclear weapons (if we can, he writes, Iran should be allowed as well). The absurdity of that suggestion boggles the mind. How can anyone compare Israel, which flies around the world to help others, to Iran, which sends its money and missiles around the world to support terror? Silly man, ignorant man.

He spoke of my Jerusalem and of recent troubles there. Yes, you see, it is mine. I have gladly shared it with those who love her for over 3000 years. Yes, I am that old…even more.


And in understanding this about me, you can understand my country and my people. So let me explain…

You see, I was there when Avraham looked to the heavens and rejected the stone gods of his father. I was there on the journey with Yosef as he was taken to Egypt and I watched as my people were enslaved and suffered. And I heard Moshe Rabbeinu, Moses our Teacher and Leader, beg for us to be free to serve our God. I watched as our God rained plagues upon the Egyptians and rejoiced when we were finally freed.

With my back to the sea, I trembled when the Egyptian army approached to pull us back into slavery and when the mighty waters separated, I too crossed okay

I stood and trembled at the foot of Mt. Sinai. Really, I was there. And I journeyed long and hard with my people in the desert and entered the promised land with them…the land that God promised to them.

I was there watching and crying as the Temple burned and the Romans came and took us away, as they stole the treasures of the Holy Temple. I was there.

Through the centuries, I experienced it all. It is part of a collective memory that goes beyond mere dates. I felt the terror of my great grandmother as she was pulled from her home with her two daughters…and I was there when the Nazis pushed my future mother-in-law, a young woman of only 18 years, into a gas chamber and only moments later, when they pulled her sister and her out before murdering those that remained. She and Klote would join a work detail and survive but carry the scars and the horror with them all the days of their lives.

I was here when a desperate and battered people reclaimed what was theirs, renewed a God-given promise that God alone could break. I heard the United Nations vote, nation by nation and my soul cried as history became reality in 1948.

For almost 74 years, it has been my parents and leaders who were attacked…and my children, soldiers of Israel, children in schools, babies attacked solely for being Jews. I saw Palestinian terrorists kidnap Israeli athletes in Munich and couldn’t contain my shock when the world continued the games, even as all 11 were murdered.

I watched in tortured agony when Samir Kuntar crossed from Lebanon into my homeland and murdered Danny Haran and little Einat. And I watched as Palestinians hijacked planes, murdered children in Maalot, rammed and shot innocent people. I prayed and cried and begged when three Israeli teenagers were taken and broke as their bodies were discovered.

And so this man from Yemen who equates Iran with Israel doesn’t bother me. This man shows me a pile of bricks that the Palestinians used to block the only path to our Temple Mount and claims it was Israelis who put it there to block Muslims.

Silly man, ignorant man. There are 12 gates to the Temple Mount – only one can be used for non-Muslims; eleven are guarded and reserved only for Muslims. Guess which gate was blocked? Yes, it was the one for non-Muslims.

Why would Israelis block the one gate that allows them access to the holiest site in Judaism? Was it Jews who stockpiled rocks and fireworks in the Dome of the Rock? Rioted and played soccer in a place they claim is holy to them?

How can anyone deny the Temple Mount’s importance to the people of Israel? Have you not seen the archeological evidence?

And worst of all, the greater tragedy is that beyond his ignorance and silliness is his blindness. He is forever entrapped in the darkness of lies. Unwilling to simply look at the logic, the history, the facts.

Today, all those who will be born in the future live through my eyes, cry when I cry and celebrate that our Jerusalem is our capital once again. It is an eternal promise fulfilled in every generation; a truth that outlives all lies. A memory that burns as bright as a thousand candles, rekindled and rededicated every day in over 100 countries and in every inch of Israel.

So this ignorant man, this silly man will remain what he is…a man without a memory, without a history that goes back 4,000 years. He will live and he will die and he will never understand my people, my land and most of all, he will never know what it feels like to live as part of an eternal chain.

For that alone, I pity that ignorant, silly man and forgive him his ridiculous and misguided errors. 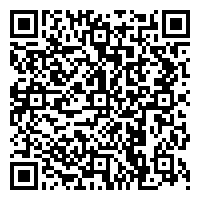