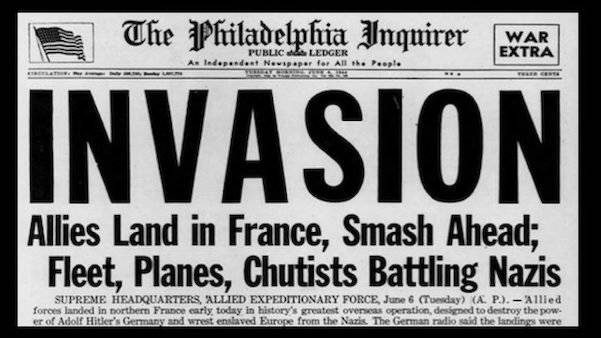 June 6, 2020, is the 76th Anniversary of D-Day, the Allied invasion of Normandy. The invasion that saved the world from Nazi tyranny.

On June 6, 1944, more than 160,000 Allied troops landed along a 50-mile stretch of the heavily-fortified French coastline to fight Nazi Germany on the beaches of Normandy, France. Codenamed Operation Overlord, Gen. Dwight D. Eisenhower called the operation a crusade in which “we will accept nothing less than full victory.”

The invasion was supposed to happen on the 5th, but the weather forced Eisenhower to delay:

Capt. James Martin Stagg was the chief meteorologist of the British Royal Air Force and was the one to brief Eisenhower about the rough seas and lashing rain affecting the shore on June 5. Stagg previsioned the small window of better weather for early morning June 6….The Germans did not foresee this brief break in the bad weather. In fact, they forecast unsettled weather until mid-June. In charge with the defense of the invasion of beaches with the Germans, Field Marshal Erwin Rommel was certain there would be no invasion between June 5 and 8 because the tides would not be favorable.

Rommel was very wrong. On June 6th, more than 5,000 Ships and 13,000 aircraft supported the D-Day invasion, and by day’s end, the Allies gained a foothold in Continental Europe. Within ten days, there were half a million troops ashore, and within three weeks, there were two million.

The invasion was the most massive amphibious military assaults in history and required extensive planning. The cost in lives on D-Day was high. More than 9,000 Allied Soldiers were killed or wounded, but their sacrifice allowed the allies to begin the slow, hard slog across Europe, to defeat Adolph Hitler’s troops, and save the world from tyranny.

The movies call D-Day “The Longest Day,” but a more apt description would be “The Day That Saved The World From Tyranny.”

Note to Snowflakes: Unlike What You Whine About, These Heroes Were REALLY Leaving Their Safe Zones

D-Day was the reason Gen. Eisenhower was chosen to be Supreme Allied Commander in Europe. The invasion at Normandy needed a logistical miracle (getting the men and supplies where they had to be), and Ike was the guy to do it. Even after the landings, from a “war management” standpoint, the crucial part of the operation was keeping the fragile bridgehead supplied so that it could withstand the German counter-attacks.

The most critical part of D-Day, however, were the heroes who fought against a well-fortified German force that had the advantage of higher ground. The Nazis had a superior position, but the allies had a significant advantage;  the will and determination of the dedicated heroes who were part of the forces that stormed the beaches of Normandy. Many of these young men didn’t leave the Normandy beaches alive. Some didn’t even make it to the beaches. But if it wasn’t for the sacrifice of those heroes from Britain, Canada, and the United States, the Empire State Building might very well have become the world’s tallest German Schnitzel stand.

As the soldiers were about to cross the English Channel, General Eisenhower gave them this message:

Soldiers, Sailors and Airmen of the Allied Expeditionary Force! You are about to embark upon a great crusade, toward which we have striven these many months. The eyes of the world are upon you. The hopes and prayers of liberty loving people everywhere march with you. In company with our brave Allies and brothers in arms on other fronts, you will bring about the destruction of the German war machine, the elimination of Nazi tyranny over the oppressed peoples of Europe, and security for ourselves in a free world.

Your task will not be an easy one. Your enemy is well trained, well equipped and battle hardened, he will fight savagely.

But this is the year 1944! Much has happened since the Nazi triumphs of 1940-41. The United Nations have inflicted upon the Germans great defeats, in open battle, man to man. Our air offensive has seriously reduced their strength in the air and their capacity to wage war on the ground. Our home fronts have given us an overwhelming superiority in weapons and munitions of war, and placed at our disposal great reserves of trained fighting men. The tide has turned! The free men of the world are marching together to victory!

I have full confidence in your courage, devotion to duty and skill in battle. We will accept nothing less than full victory!

Good Luck! And let us all beseech the blessings of Almighty God upon this great and noble undertaking.

General Eisenhower also had a letter prepared case D-Day failed. Demonstrating his exceptional leadership, he placed the entire blame on himself:

“Our landings in the Cherbourg-Havre area have failed to gain a satisfactory foothold and I have withdrawn the troops. My decision to attack at this time and place was based upon the best information available. The troops, the air, and the Navy did all that Bravery and devotion to duty could do. If any blame or fault attaches to the attempt it is mine alone.”

But he didn’t have to send that letter, thanks to the blessings of God, the planning of Eisenhower, and the pure will and determination of the heroes who crossed the English Channel.

That night FDR went on the radio, told America what was happening at Normandy and asked all Americans to join him in prayer:

NOTE: There is no record of the ACLU complaining about FDR offering a prayer.

On the 40th Anniversary of D-Day President Ronald Reagan (June 6, 1984) delivered an address at Point-du-Hoc the highest point on Normandy Beach which overlooked Omaha and Utah Beaches:

The men of Normandy had faith that what they were doing was right, faith that they fought for all humanity, faith that a just God would grant them mercy on this beachhead or on the next. It was the deep knowledge — and pray God we have not lost it — that there is a profound, moral difference between the use of force for liberation and the use of force for conquest. You were here to liberate, not to conquer, and so you and those others did not doubt your cause. And you were right not to doubt.

(…) Here, in this place where the West held together, let us make a vow to our dead. Let us show them by our actions that we understand what they died for. Let our actions say to them the words for which Matthew Ridgway listened: “I will not fail thee nor forsake thee.”

Reagan’s full speech is embedded below and encapsulates why we needed to fight at Normandy, and why we must fight for freedom every day.

As we remember the D-Day invasion more than three-quarters of a century ago and thank those heroes who saved the world from tyranny, keep in mind these words from FDR’s prayer that were read by President Trump at a D-Day ceremony in Portsmouth, England on June 5th.

“Almighty God. Our sons, pride of our nation, this day have set upon a mighty endeavor. A struggle to preserve our republic, our religion, and our civilization and to set free a suffering humanity. They will need thy blessings for the enemy is strong. He may hurl back our forces but we shall return again and again. And we know that by thy grace and by the righteousness of our cause, our sons will triumph. Some will never return. Embrace these Father and receive them, the heroic servants, into thy kingdom and O Lord, give us faith. Give us faith in thee, faith in our sons, faith in each other and faith in our united crusade. Thy will be done, Almighty God. Amen.”

God Bless the heroes who saved the world on D-Day and the battles that followed with the help of the Lord. 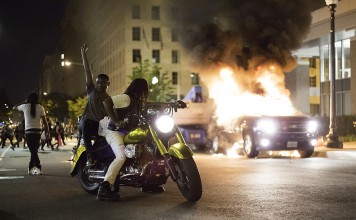 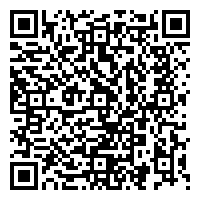