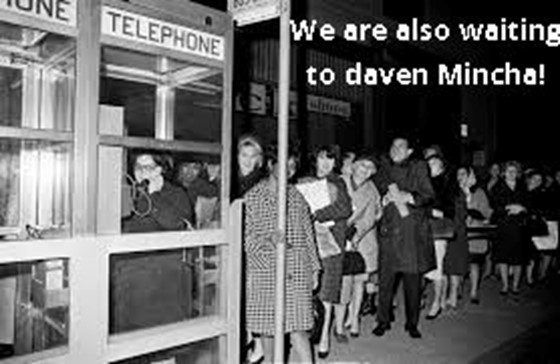 As we remember the Beis HaMikdash, I thought it would be a good idea to recall some other “lighter” things.

Now that the Three Weeks have passed, we could all use things to smile about.

And now I present my list of “Those Were the Days“:

1.      Remember when you realized that sunset was approaching, and you ducked into a phone booth, picked up the receiver, and pretended to talk to a human being? While in reality, you would be speaking to Hashem?

Well, those days are long and gone. The last lone phone booth was removed by crane from its post on Seventh Avenue and W. 50th street, just south of Times Square, on May 23, 2022.

Those days are gone.

I might add, I do recall one day ducking into a phone booth to daven Mincha, and upon exiting, I realized I was davening on Church Street!

I also vividly recall davening the Brocha of Shema Koleinu with much Kavanah, only to have the pay phone ring immediately after I finished the Tefillah.

The caller asked, “Is the Godfather available?”

a.      For those who are stumped, The Rolodex held specially shaped index cards on which the user writes or types the contact information for one person or company.

b.      Well, forget about Rolodex; your smartphone (or even your dumbphone, for that matter) does a better job organizing than you could ever do!!

a.      It used to be, you could tell when your friend was schmoozing away. You would hear this irritating tone that told you, “Hey, I’m talking to someone else.”

If you have never heard one, give a listen: https://en.wikipedia.org/wiki/File:NorthAmericanBusySignal.ogg

4.      Remember when people thought it was really cool, trendy, fashionable, and just plain swank to make up a really (supposedly) funny, outgoing message?

a.       One popular (but SO annoying)  example was to take all of your 17 kids and line them up and have each one say one word,

e.       the Goldbergs (ten-year-old with mother in the background saying very loud, “speak clear or you won’t speak at all!”)?

f.       Or how about this one, which was the rage in 1996: “Hello. I’m available right now but cannot find the phone. Please leave a message, and I will call you up as soon as I find it.” Wow! That was SOOOOO funny; I fell off my dinosaur laughing.

g.     This one once had me hopping and spinning and touching my nose numerous times until I realized it was a joke, “Hi, I’m sorry I couldn’t come to the phone, but if you hop 3 times, spin around, touch your nose and say your name, then leave me a message after the beep, I’ll get back to you as soon as possible.”

5.      Who remembers Cassettes? If you don’t, I still have an entire set of Rabbi Wein’s history Cassettes. If you can find a device to play them, you can have them. When they first came out in the 1960s, a friend said, “Don’t buy them; they won’t last. Nothing can replace a tape on a reel! He was correct! They did not last

6.      Here’s a real hard one, Who remembers when you told someone you were learning Gemara, you did not mean the Daf Yomi?

7.      Another hard one: Do you remember when people actually used an “Aramaic Only” Gemara? Now, I know many of you think I am making this up. However, I am not! There was a time when people really learned the Gemara in Aramaic????

I am serious; please stop laughing at me!

8.      Who remembers the following items and occurrences?

f.       Real photographs that you could hold in your hand

g.     Taking a picture without knowing how it looked until it was developed

i.       Hearing the phone ring and having no idea who was calling

j.       Calling your friend and saying, “Hello, Mrs. Goldberg, this is Ronny; how are you? Can I please speak to Reuvain? Thank you, please give regards to Mr. Goldberg.”

9.      Here’s one that I know I am dating myself. Who remembers when Shuls had one Minyan on Shabbos, and people davened together every week in the same Shul, AND you even became a member (I am not kidding) of the Shul you davened in???

10.  We can go on and on. However, I’ll end with just one last memory. Who remembers when people seemed less in a rush and less overwhelmed? When learning how to parent meant spending time with your child, and learning how to be a mensch meant acting like one?

Those were the days, my friend

But, alas, they have ended….

PS. Please forgive me if I sound more (fill in whatever you want) than usual…

However, please cut me some slack.

On Friday, my six-year grandson noticed a picture of my daughter and son-in-law on my phone.

I added, “When you get married, I will put your picture from your Chasunah on the phone too!’

He looks at me as seriously as a six-year can and says, “But, Zaidy, you won’t be alive anymore when I get married!”

Well, I calmed myself down that it was only a six-year-old’s perception, however, no adult would think that.

I have been using him for thirty years.

He tells me he shared a birthday party with his seven-year-old grandson.

He told me proudly when he asked his grandson, “What’s the difference between me, who is 77, and you, who are seven?”

He says his grandson said, “Grandpa, you have two sevens, and I have only one.”

He was so proud of his grandson’s comment that I decided to tell him how my six-year-old grandson calmly stated that my demise would precede his wedding.

I figured that would get a good laugh out of him.

Instead, my barber, without missing a beat, says, “Wow, he’s only six, and he’s already so smart!

Look how he figured that out!

We don’t realize how smart they really are!”

After I regained consciousness, I told him to take a little bit more off the top.