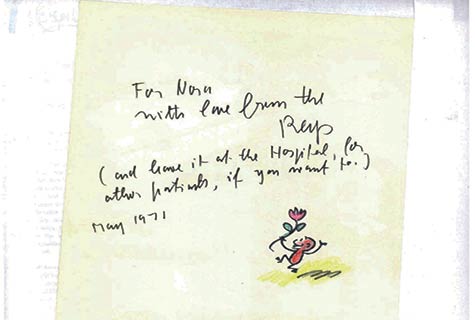 Exhibited on the jump page of this article is an extremely rare original signed ink drawing of an American icon and the world’s most beloved little monkey: H.A. Rey depicts Curious George dancing with a bouquet of flowers in his hand.

The sketch, on the verso of the front free endpaper of Curious George Goes to the Hospital is inscribed “For Nora/ with love from the Reys (and leave it at the Hospital, for other patients, if you want to.) / May 1971.”


Curious George Goes to the Hospital (1966) was H.A. Rey’s final story before his death. The story differed from the previous books in its attempt to be both educational and entertaining. George comes down with stomach pains after swallowing a puzzle piece and, taken to the children’s ward at the hospital, he meets other young children who also need medical attention. He decides to explore the hospital and, as usual, causes a commotion due to his curiosity.

Hans and Margret Rey collaborated with the Children’s Hospital Medical Center in Boston to familiarize children with hospitals, their procedures, and the people who work in them. By presenting the hospital in a story with a comforting and familiar character like George, they hoped to ease some of the anxiety a child entering a hospital might have.

Margret later commented that “to my surprise, nobody in any country ever objected to the fact that a monkey . . . goes through the whole hospital routine.”

Born into a traditional Jewish family, Hans Augusto (“H.A.”) Reyersbach (1898–1977) was a self-taught artist who at a young age developed a love for animals and began sketching them at the famous Hagenbeck Zoo near his Hamburg home. After serving in the German army during World War I, he returned to Hamburg and worked as a commercial artist, designing and lithographing circus posters. Facing difficult economic times in Germany, however, he traveled to Brazil where, while selling goods along the Amazon River, he observed and sketched monkeys in their natural habitat. Hans later worked on decorative maps for the Brazilian Pavilion at the Paris World’s Fair (1937).

Margarete Waldstein (1906-1996) was the granddaughter of a prominent Hamburg rabbi and the daughter of a Jewish member of the Reichstag, the German parliament, in the 1920s. She studied art and photography at the renowned Bauhaus School and at the Dusseldorf Art Academy and, in the late 1920s, had a solo exhibit of her watercolors in Berlin.

Sensitive to the rapidly changing political climate and having the foresight to leave Germany as Hitler began his rise to power, she worked as a photographer in London before traveling in 1935 to Rio de Janeiro where she ran into an old family friend: Hans, who had first met her when she was ten years old and sliding down a banister. The two artists began working together, founded the first advertising agency in Rio, married in August 1935, and changed the name Reyersbach to the easier to pronounce “Rey.”

After honeymooning in Paris, the couple decided to remain there and settled in Montmartre, a well-known French artists’ neighborhood, where they began writing and illustrating books for children. As Margret later explained, “We loved monkeys…. Hans was the artist, a genius and a dreamer who loved animals. I was the midwife. I’d write the text and supervise the drawings.”

The concept for Curious George began with a story about Raffy, a lonesome giraffe who befriends nine monkeys, the youngest of whom is named Fifi. By 1939, having decided to narrow their tale to Fifi, the Reys were hard at work on The Adventures of Fifi and another book about a penguin named Whiteblack. As we will see, “Fifi” eventually became the Curious George we all know and love.