History was made last year when Nikola Jokic (of the Denver Nuggets) became the lowest draft pick to ever win the NBA MVP award. History on top of history was made last week when Jokic repeated as MVP, becoming only the thirteenth player in league history to win back-to-back MVPs.

Consider: More than 60 percent of all MVP winners were among the top five picks in the NBA draft. Not even one was ever in the second half of the first round (picks 16-30). Jokic, however, was picked in the middle of the second round, at #41.


This is a basketball rags-to-riches tale. But despite being crowned the best player in the entire league, perhaps it is his exemplary character that distinguishes him most. Here are six character traits we can all learn from Jokic.

In a sports world consumed by ego, Jokic’s humility is becoming legendary. After receiving the news last year, he immediately turned to his team: “Look guys, this is not my award…I guess it’s my trophy or whatever, but you guys are a big part of it, so thank you everyone. Thank you.”

This year, he preemptively flew back to his home country of Serbia, where he pulled off the most low-key award ceremony possible. The video of Jokic making team owner Josh Kroenke wait to present the trophy while Jokic, crying, brought his horse into the stable, is unreal. Fact is, in fact, stranger than fiction.

When asked what the MVP means to him, his response was, “It doesn’t affect me that much, to be honest. When I see the list, of course there’s great names. I never thought I would be on the list. It’s a surprise.” These are rare words from an MVP winner. Remember, we are not talking about a rabbinical conference where it is admirable – if not expected – for one to downplay one’s talents. We are talking about a sports league where attention is craved and ego reigns.

Even after being ejected in a playoff game on a ridiculously overblown call, he had the mentschlichkeit to apologize to the player he fouled. That requires humility.

Jokic exemplifies the Talmudic statement, “One who flees from honor, honor will catch up to him” (Eruvin 13b). Other MVP candidates don’t hesitate to tout their case. Jokic, by contrast, was visibly uncomfortable to be asked about it. He even refused interviews with national outlets. Last year, a reporter asked him a question that no one has likely ever thought to ask an MVP winner before. “Are you happy the MVP proceedings are over?” The answer, given with a smile, was “To be honest, yes.” Despite this clear wish for the honor to dissipate, here we are again, with honor chasing him across the world.

The Nuggets strength coach, Felipe Eichenberger, once said of Jokic, “If he tells you ‘I’m gonna do something’ with that determined look, he will.” Jokic religiously follows Eichenberger’s diet recommendations as if he were G-d commanding the laws of kosher. Even when the rest of the team indulges in Southern-fried food after a win in Memphis, Jokic sticks with his regular post-game meal: chicken and rice.

Jokic had an insane Coca-Cola habit – a gallon per day! – but once he resolved to stop, he stopped. He hasn’t touched soda in six years.

Despite being the team’s best player, with no need to prove himself anymore, he’s consistently the first one into the gym and the last one out.

There’s a good reason why his nickname is “Joker.” A few years back, Nuggets coach Michael Malone described him as “just a big, goofy kid.” Watch his post-game press conferences, and he’s constantly cracking jokes, many of them of the self-deprecating variety. Humor is a finicky thing. Judaism frowns upon levity or cynicism, but Jokic uses humor in a positive way, to poke fun at insanity and restore equilibrium. Basketball is his priority, but he makes light of it at times because it’s not “his everything.” He often references the numerous other blessings in his life, the one mentioned most frequently being his family.

Clearly, there’s a competitive desire that burns strongly within him, but you’d never know it by watching him speak. He’s equally liable to make a “goofy” comment after a loss as he is after a win. Losses don’t define him; neither do failures. He knows that, rather than beating himself up, the best response to failure is channeling his talents towards success the next time out. To borrow from Proverbs 24:16, “Seven times a righteous one may fall, but he picks himself up.” In our personal endeavors as well, we’d do well to adopt Jokic’s easygoing approach to failure.

When asked about being an emerging MVP candidate, he demurred. “I never think about that,” he said. ” I’m just thinking about the next game. I think that’s what the mentality needs to be…. when you think in the future, I think you put a lot of pressure on yourself.”

Being selfless shares some common roots with humility, but is distinct from it. No further evidence is needed for Jokic’s selflessness than one statistic: 8.3 and 7.9 assists per game during his two MVP seasons, the second and third-highest averages for an NBA center in history. Jokic’s selflessness is on full display each time he passes the ball despite having a great opportunity to shoot it himself. Watching highlights of his passing is a jaw-dropping exercise that leaves you speechless. He simply doesn’t pass like most players; he actively looks for any opportunity, however outlandish it might seem, to give his teammates a good look at the basket.

In his coach’s words, “Nikola is all about the team. I really think he gets greater enjoyment out of making everyone around him better. He’s not about the spotlight, he doesn’t have an ego.” Incredibly, he once asked his coach to come off the bench instead of starting.

In the bigger picture, since Lebron James became the first player to form a “superteam” in 2010 – in the decidedly unhumble fashion of building up drama and labeling it “The Decision” – this has become the way of the NBA. Superstars demand trades and otherwise collude with each other to end up on big-market teams together (e.g., New York, Los Angeles).

Given that he plays in the relatively anonymous market of Denver, he was once asked about this trend and his ideal place to play. Jokic, true to his unorthodox form, declared, “My personal opinion is I’d rather win a championship with the Denver Nuggets than with any other team. I’d like to stay here forever.”

Asked about how much winning back-to-back MVPs means to him, Jokic answered, “My daughter (eight months old) showed me that basketball isn’t the most important thing.” Except I’d posit Jokic already had this attitude long before his daughter was born. Asked how he celebrated after winning the prestigious Player of the Month award in January 2021, he quipped, “I spent time at home with my wife.” An awkward silence followed, with the reporter waiting for the real answer until Jokic affirmed, “No really, that’s what I did.”

In the middle of this season, playing at an elite level despite the fatigue that parenting an infant often brings, Jokic was asked if his energy would start to dip. His answer? The exact opposite! “Right now, I have a little daughter, and my family is there, so they give me a lot of energy. There’s just happiness when I go home. Maybe that’s something new in my life that gives me a spark. I always say, Natalija (his wife) is the MVP of our family. She’s doing so much for us and for the baby. It makes me so happy just to see her face when baby sees Natalija. It’s amazing. I love it.”

Work-life balance? Let’s take a tip from Jokic and tip the scales toward life. Even for rabbinic personalities involved in the noble world of Torah, I’m rather skeptical that any of us are as committed to our Torah learning as Jokic is to basketball, yet here’s an MVP who puts the private life of his family ahead of the accolades achieved through professional acclaim. Or, as Josh Kroenke learned while waiting outside Jokic’s livestock stables, always put the horse before the cart. 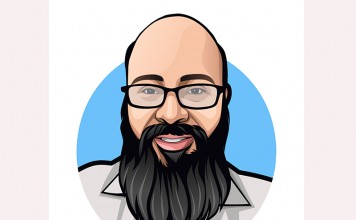