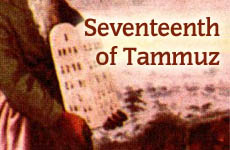 (This article which previously appeared on Jewish Press Online,  is re-posted with permission from the author and originally appeared at Aish.com)

The 17th of Tammuz is a fast day commemorating the fall of Jerusalem, prior to the destruction of the Holy Temple. This also marks the beginning of a 3-week national period of mourning, leading up to Tisha B’Av.

The 17th of Tammuz is the first of four fast days mentioned in the prophets. The purpose of a fast day is to awaken our sense of loss over the destroyed Temple – and the subsequent Jewish journey into exile.

Agonizing over these events is meant to help us conquer those spiritual deficiencies which brought about these tragic events. Through the process of “Teshuva” – self-introspection and a commitment to improve – we have the power to transform tragedy into joy. In fact, the Talmud says that after the future redemption of Israel and the rebuilding of the Temple, these fast days will be re-dedicated as days of rejoicing and festivity. For as the prophet Zechariah says: the 17th of Tammuz will become a day of “joy to the House of Judah, and gladness and cheerful feasts.”

What Happened on the 17th of Tammuz?

How Do We Observe the 17th of Tammuz?