Imagine discovering at the earliest age a passion for an endeavor for which you have an abundance of natural talent and skill. Add to that the head-start of growing up surrounded by the giants in your chosen field, who closely mentor your progress. For decades, thousands flocking to your home seeking sagely advice, and you produce dozens of scholarly volumes on the entire breadth and depth of your chosen field.

Add to that a single-minded focus and unwavering devotion to the goal – day after day, year after year – for 94 years.

That was the life of Rabbi Chaim Kanievsky – the undisputed Prince of Torah (Sar HaTorah) – who was buried today in the central Israel city of Bnei Brak, as hundreds of thousands converged to pay last respects. 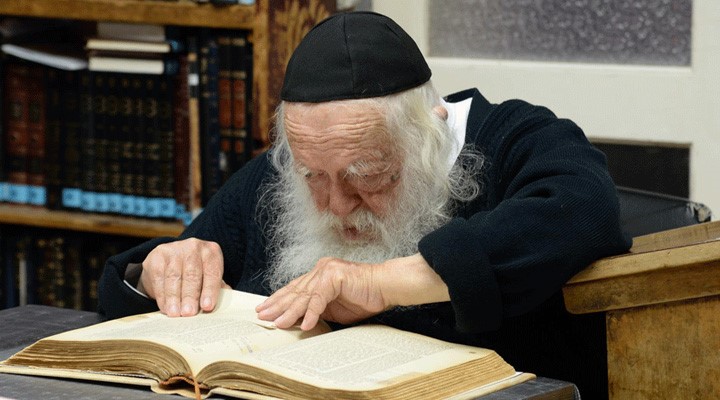 Shmaryahu Yosef Chaim Kanievsky was born in 1928 in Pinsk, now Belarus. His father, Rabbi Yaakov Y. Kanievsky, was the widely revered Steipler Ga’on. When Chaim was 6, the Kanievsky family moved to Israel. On the sea voyage, Chaim sat day after day with his father, absorbed in Torah study. As they neared the shores of the Holy Land, they were about to complete study of Exodus, when suddenly his father kissed the book and closed it. “Let’s wait until we arrive,” he explained, “so we can celebrate in the Holy Land.”

This gave young Chaim not only an appreciation for the preciousness of Torah study, but also love for the land of Israel. Since then, he never departed the borders of Israel, and became a lifetime advocate for aliyah, encouraging people to move to Israel.

Rav Chaim never departed the borders of Israel, and became a lifetime advocate for aliyah, encouraging people to move to Israel.

Rav Chaim’s childhood home was the center of the Torah world, with people from around the world gathering there to confer with some of the greatest rabbis of the 20th century. Besides his revered father, Rav Chaim’s uncle was Rabbi Avraham Y. Karelitz (the Chazon Ish), the premier Torah leader during the critical years of Israeli independence. The Chazon Ish, himself childless, showered Rav Chaim with constant tutelage and individual attention, grooming him in the art of Torah scholarship.

Rav Chaim, a child prodigy with a photographic memory, elucidated complex talmudic teachings at a young age. As a boy, he studied at Yeshiva Tiferes Tzion in Bnei Brak, amusing himself during recess breaks – not with a ball or board game – but by counting the number of times various sages are quoted in the Talmud. For his bar mitzvah, he completed the Babylonian Talmud (Shas), a feat that many do not manage to achieve in a lifetime.

In the 1948 Israeli War of Independence, when five Arab armies attacked, a state of emergency was declared and every Israeli was mobilized into the IDF, no exceptions. At the time, Rav Chaim was a 20-year-old student at the Lomza Yeshiva in Petach Tikva. On one occasion, a truck pulled up to the yeshiva and transferred all the students to the site of artillery fighting near Tel Aviv. Rav Chaim was ordered to climb a large hill and, due to the vast shortage of armaments, was given a stick and two stones to fend off potential attackers. Rav Chaim took along a volume of Talmud, climbed the hill and – in classic form – managed to study Torah the entire time until the skirmish was over.

Rav Chaim married Batsheva, the daughter of Judaism’s leading legal decisor, Rabbi Yosef S. Elyashiv (and granddaughter of Rabbi Aryeh Levine, beloved Tzaddik of Jerusalem). Rav Chaim’s illustrious lineage was unmatched, although that alone is insufficient to ensure success. Metaphorically, “nine zeros is not a billion” unless an actual number is added in front. So too, Rav Chaim was surrounded by Judaism’s leading Sages, but what he added at the beginning made it all count. 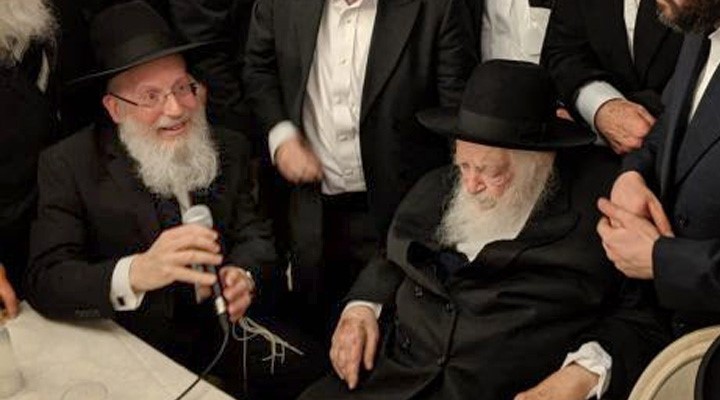 Rav Chaim was a private citizen, leading no synagogue or yeshiva, and with no official teaching or rabbinic position. For years, he occupied a nondescript seat in Kollel Chazon Ish, conducting uninterrupted in-depth research and writing. Once, as a young man, he considered taking a paid position, but his father said: “Your contribution is to sit and learn. Period.” With commitment and diligence, Rav Chaim never wavered from that advice, becoming this generation’s paradigm of nonstop Torah study.

Inside Rav Chaim’s modest home on Rashbam Street, every room and hallway were lined with bookshelves, crammed with thousands of Torah books. On Shabbat, Rav Chaim would play a game with his children. One of them would name a book title, and Rav Chaim would educate and entertain the children by immediately telling them its precise location among the volumes filling every inch of wall space.

Rav Chaim toiled day and night, saying that the mental energy expended on Torah study is more physically taxing than digging ditches or laying bricks. Few people manage to study so many intricate works in a lifetime. Rav Chaim completed them all – every single year.

When a wealthy visitor once offered to buy them a spacious house, they declined, explaining that it encourages people to see that economic hardship does not preclude devotion to Torah study.

The Kanievsky’s had a small apartment, and the young children slept in a room filled to the brim with beds. When a wealthy visitor once offered to buy them a spacious house, they declined, explaining that it encourages people to see that economic hardship does not preclude devotion to Torah study.

Rav Chaim learned before dawn with a study partner and they wanted to be able to awaken and study right away. Despite the already over-crowded conditions, a spot was found for the study partner to sleep in the Kanievsky’s apartment on a regular basis.

Rav Chaim published dozens of volumes that are modern classics, including Derech Emunah, Derech Chochma, Shoneh Halachos, and Ta’ama D’kra. With unparalleled breadth of knowledge, Rav Chaim was uniquely qualified in obscure topics of Jewish law, such as lunar cycles, agricultural laws in Israel, and a groundbreaking commentary on the Jerusalem Talmud.

Additionally, Rav Chaim authored tens of thousands of rabbinic responsa on nearly every conceivable aspect of Torah. Each week he would sequester himself in a room with stacks of hundreds of letters, and patiently responded to every single one. Due to the sheer volume and to maximize his time, Rav Chaim’s responses were record-breaking brief – typically a single line, and often limited to one word in microscopic letters, occasionally adding a reference to the Jewish codes.

Rav Chaim made an art out of brevity. When delivering words of encouragement, to save precious seconds, he invented the word “Boo-ha,” an acronym for “blessings and success.” 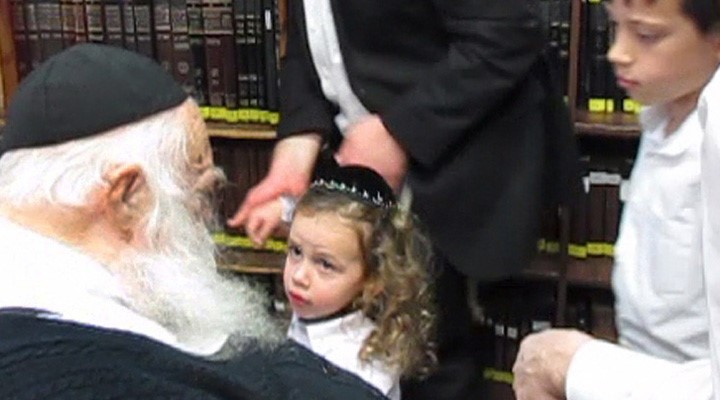 Servant of the People

As the world’s most learned sage, Rav Chaim had insights into every possible dilemma – personal, communal, or global. Despite his reluctance to take a position of public leadership, tens of thousands of people from around the world – politicians, businesspeople, educators, and foreign dignitaries – flocked to Rav Chaim’s modest home on Rashbam Street.

At appointed times each day, the steep staircase outside Rav Chaim’s home would be lined with visitors waiting to enter, with lines often snaking around his house. Thousands would enter his inner chamber for blessings, inspiration, and sage advice from this humble human being, endowed with Divine guidance. Preferential treatment was given to little boys celebrating their third birthday, the day of their upsherin (first haircut), as Rav Chaim recognized the challenge of asking young children to wait in line.

For most of Rav Chaim’s life, he left decisions on communal matters to others. A few years ago, when I went to consult with Rav Chaim regarding a project of communal concern, he listened to my question and then – characteristically – sent me to consult with his Bnei Brak colleague, Rabbi A.Y.L. Shteinman. Rav Chaim often expressed tremendous gratitude to Rabbi Steinman for shouldering that burden of responsibility, enabling Rav Chaim to continue his studies uninterrupted. 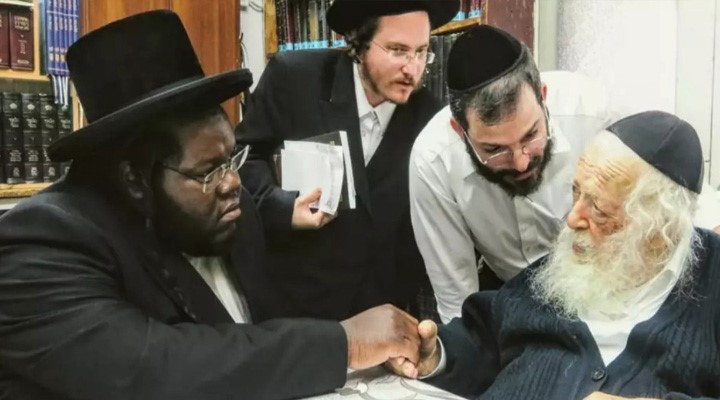 Nissim Black, the Haredi rapper, conferred with Rav Chaim, who proffered a warm blessing and declared: “Your skin color is a virtue.”

Rav Chaim was renowned for being honored multiple times – every day – as sandek, holding the baby at a Bris Milah. In 1999, Rav Chaim accepted an invitation to the Bris of my son. At the appointed hour, he swept through the front door of my home and, with nary a word, unfurled the tattered tallis – inherited from his saintly father – that he wore at every bris. In our living room, Rav Chaim served as sandek, lovingly dropping wine into the baby’s mouth, imparting spiritual influence on the baby, and praying intently for his future success.

Serving as sandek is considered a merit for becoming wealthy, and someone once asked Rav Chaim, “If you serve so often as sandek, why are you not wealthy? He replied that “wealth” is not limited to money, and quoted his father that wealth is attained by publishing Torah commentaries. Rav Chaim added his own opinion that grandchildren are a source of tremendous wealth. 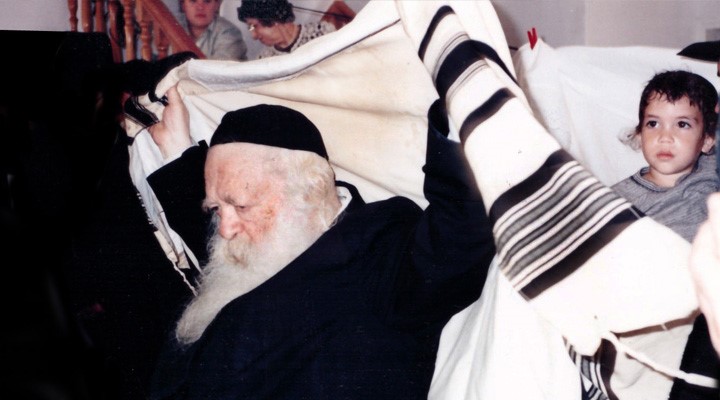 Rav Chaim donning his tallis at a Bris Milah, 1999

Rav Chaim’s time was highly structured, and keeping to such a rigorous schedule comes with intendant risks, particularly regarding one’s private life. Rebbetzin Kanievsky had every right to voice opposition to this hyper-focus on Torah study, which ostensibly came at her expense. Yet she was his biggest supporter. Someone once made Rav Chaim a generous offer, which involved him spending two minutes not related to Torah study or community matters. Rav Chaim presented the proposal to his wife, who nixed the idea, saying that two additional minutes of Torah study were worth more to her than anything else.

Fittingly, Rav Chaim passed away on Shushan Purim, a day when Haman – descendant of the biblical Amalek – fought to annihilate the Jewish people. Amalek represents ideologies antithetical to Torah; the best weapon we have against that is the study and practice of Torah. For 94 years, Rav Chaim Kanievsky fulfilled that mandate to the utmost.

With thanks to A Gadol in Our Time: Stories about Rav Chaim Kanievsky