Ohev Shalom Congregation in Miami Beach, located at 7055 Bonita Drive, was founded in 1960 by Rabbi Pinchas A. Weberman and has been an important part of South Florida’s Jewish community ever since.

The shul is a place of refuge from the mundane, an oasis in the rat race of life. Friday nights and Shabbos days are warm and welcoming respites from the week, with family style dinners and lunches provided as an accommodation for the congregation. Everyone is invited and everyone feels welcome.

Members often step up to address the needs of the congregation. A recent bar mitzvah celebration was an example. Congregants joined in to help the family in preparing a festive meal. A beautiful cake was baked and decorated. The celebration was a collaborative effort, a true labor of love.

Shimon Braun is a member of Ohev Shalom who reflects the attitude that the synagogue inspires. Braun was born in Colombia and later lived in Israel. He currently resides in South Florida. He is the Shabbos gabbai of the shul and frequently leads informal discussions on the parshah of the week at the synagogue’s Shabbos table.

Braun has a black belt in karate and is a professional instructor of the technique. He also has a softer, artistic side, as he has worked for a year planting and designing the shul’s landscaping and fashioning some impressive sculptures in the garden that surrounds Ohev Shalom.

While visiting his sister, Braun spotted some extra blocks that were left over from a project in her home. The beautiful natural stones were captivating. When his sister said she had no further use of the extra tiles, Braun brought them to the shul and the project was initiated.

The blocks were broken, yet their configurations spurred Braun’s imagination. He fashioned a sculpture using triangle-shaped material that reminded him of pyramids and mountains. He placed these tiles in a juxtaposition of composition. The pyramid represented Pharaoh and arrogance. The mountain represented the Sinai of revelation and the modesty of both the mount and the man, Moses. Two stones representing the tablets complete the work.

A larger sculpture has evolved and represents the Beit HaMikdash. Marble and blue glass have been added to the tiles. The collage of textures and colors is quite effective. Braun hopes they will be used as a visual prompt for contemplation and thought.

There are many lessons to be learned; perhaps the most poignant can be taken from a reflection by the artist himself. “Every rock and piece of material was chipped or broken is some way, and yet it was put together to form a beautiful work of art,” Braun says. “We all need to remember that we have to work with what is on our plate. We need to use what we have and use it for the good.” 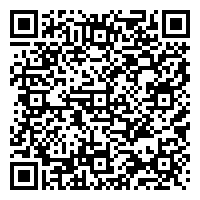