Some painters enslave themselves to detailed landscapes, patiently tracking every tree branch and grass blade in an effort to transcribe and document everything. As “naturalists,” these artists abide by a modern derivation of Plato’s notion of ideal art: painted grapes so real that they fool the birds into trying to consume them. There is desperation in this body of work, and viewers get the sense that the artists, fearing that reality will soon disappear, half expect to be called as expert witnesses to preserve the memory of each berry and twig. John Bradford is certainly not one of these artists, and in fact he even bluntly denounces nature as sacrilegious.

Bradford once enjoyed Rembrandt’s “philo-Semitism” and “severe” chiaroscuro (depicting depth in art via value, or shading), which “was the best way to eliminate nature and focus on the narrative.” But he later decided that Rembrandt’s solution “was as dualistically Christian as others, in that he used light as a metaphor for goodness filling a demonic darkness. In the Beginning, G-d did separate the light from the dark, but I don’t remember Him voicing an opinion about which was good and which was bad.“

This sort of ambiguity as to what is good and what is bad is a typically postmodern inquiry, and it exposes itself to one of the popular indictments of postmodernism: It is arbitrary. When one concerns oneself with unpacking language for purposes of laying bare its assumptions and exposing its inability to truly communicate, one must use some means of communication to convince others that communication is suspect.

Why, the critic of postmodernism often asks, do some words and ideas (namely postmodernism) get to survive the onslaught on language, while others (classicism, truth, justice, etc.) are unfairly targeted? There really is no good answer to this question (in part because the postmodernist would deconstruct “good” and “answer”), but there does not really have to be one.

Bradford’s art is a great example why this is so. In his paintings, which hung recently at the Mercer Gallery in New York, Bradford depicts Biblical scenes as if he were directing a film, with a keen eye for set design. Many of the works contain foliage of some sort, whether they populate interior or outside scenes. And here is where the arbitrary kicks in: There is no reason to assume that Moses stood outside as he cast his staff to the ground, so that it might become a serpent. Even the recent animated Prince of Egypt had the good sense to depict the scene inside Pharaoh’s palace, surrounded by guards, magicians and slaves. Exodus 7: 10-13 remains ambiguous on the matter, though the verse does suggest the two went “in” (the Hebrew is aleph-lamed) to Pharaoh, according to some translations. But Bradford’s “Moses before Pharaoh” occurs outside, surrounded by trees and dirt.

The decision to infuse the scene with trees is at once arbitrary and meaningful. Trees in the Bible symbolize a number of things from life (“a tree of life – ‘etz chaim’ – it is for those who grasp it”) to might (Song of Songs, 7:7) to knowledge of good and evil (as in Eden). The field is a chaotic place where Esau lives his violent life, while Jacob studies in his tent. But fields also served as loci of meditation for many prophets like Moses and David, who were shepherds in their pre-prophetic days. By placing Moses’ anti-natural act of turning a staff into a snake (the Bible’s blend of nanotechnology or alchemy) in a natural context (trees), Bradford reveals new aspects of the narrative that are otherwise lost in most people’s conceptions of Biblical stories as containing characters without setting.

In fact, Bradford’s textual inquires reflect themselves in his art-making process. “I am an heir to the great American Abstract Expressionist movement in that the painting is process: I arrive at my composition as I paint,” he wrote in an email. “I paint the entire composition directly onto the canvas and keep re-attacking the entire surface over and over again until, as I said, the narrative gesture of the work feels appropriate to the format, and I stop.”

“Jacob Blessing His Sons” is another example of Bradford’s “attack” upon Biblical space, and another one that he resolves through nature. The viewer can barely make out a bed with a character lying upon it on the extreme left hand side of the canvas, as other “figures” surround Jacob. One red character may be kneeling on the floor – perhaps Simeon or Levi beseeching his father’s forgiveness for sacking Shechem and the ensuing genocide. Another red figure stands off in the distance in the top right corner of the canvas, perhaps representing a guard watching the scene, or the anti-social and alienated Joseph, who later brings his sons to say goodbye to Jacob alone, without his brothers around. The red figure stands in a green oasis of trees and life, amidst the larger environment of hot browns, reds and ochres of the Egyptian desert. In a room that has surely begun to smell of death, Bradford has drawn a large green plant (bottom right), and a window or doorway looking out to a garden full of life.

Bradford has often appeared in Richard McBee’s reviews in these pages for his Biblical paintings, but he may strike some as an unlikely guest in a column on Jewish arts, as he is not Jewish. Surely, non-Jews paint Jewishly all the time (think Hiram and company building the Temple), but Bradford’s connection to Judaism and Jewish art is somewhat deeper than most. “I believe Judaism is an authentic religion,” he said through email. “My work celebrates the Hebraic Biblical ethos at the heart of our American heritage.” He considers the modern era “a consequence of a perspective unique to Judaism” that “nature is disenchanted and that man struggles creatively within nature to build a system of Justice, which was the single positive commandment given to Noah.”

To Bradford, modern painting, so appealing for its bible-like “language of reduction and discontinuity,” shares an “anti-naturalistic perspective” with the Bible. “The Bible concerns itself with distinctions, separations, and boundaries. So does a good painting,” he wrote in an artist statement, which at times recalls Rabbi Dr. Joseph B. Soloveitchik’s conceptions in Halakhic Man, “I used to believe that it was uncanny how the conventions of Biblical narration so perfectly captured the vicissitudes and quirks of reality. Now I see it is quite the other way around.”

In a May 7 review of Bradford’s Mercer 55 show in The Village Voice, R.C. Baker wrote: “These 14 Biblical scenes, painted with a drippy, Abstract Expressionist brio, are devoid of both fundamentalist didacticism and secular snarkiness, while beautifully evoking the imperfect humanity underlying the divine.” Baker is quite right to point out that Bradford refrains from preaching, though over email he hardly holds back from voicing his opinions. “Of course I detest contemporary trends that blithely expropriate Biblical stories to expound on current events or to ridicule or demean Judaism,” he wrote, though he added, “but even in that case, it’s a free country.”

“Moses Strikes the Rock” might best represent Bradford’s methodology. In the work, Moses literally beats nature with his stick (thus Moses and Bradford and co-conspirators in the homicide), as water flows out toward the people. But the postmodernist in Bradford can hardly suffer the boundary between nature and man (there are no conspicuous women in the piece). The painting is a study in camouflage, as any predator trying to hunt the Jews would find the brown, black and white Jews indistinguishable from the trees and grass. For his part, Moses wears a light blue robe with an orange belt, which ought to distinguish him from the rest of the figures, but only serves to meld him with the flowing water. Just as Moses sins in his betrayal of the word of G-d by striking the stone, the environment has sinned, as the water (which literally is Moses in the piece) flows forth in response to the commandment of man, not G-d.

“By using Modernist conventions to reduce the narrative to its essentials, I invite the viewer to encompass the issues of the story in very concrete forms while simultaneously opening the viewer to the dialectical spirit of Biblical interpretation,” Bradford says of his work, and that is precisely what mature, credible Biblical art ought to do.

John Bradford’s work will be part of a group show in September at the Synagogue of the Arts on White Street in New York; www.synagogueforthearts.org. 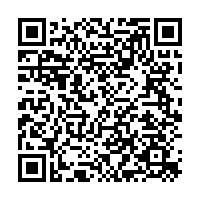