The year 2013 in Israel went out with a bang: on December 31st, IDF Ground Forces Commander Maj. Gen. Guy Tzur made history by appointing the first woman to the position of combat battalion commander. The slim, attractive, thirty-five-year-old Petah Tikva native, Major Oshrat Bachar, was made commander of a battalion in the IDF’s Combat Intelligence Collection Corps.

Referring to the extraordinary appointment, the trailblazing commander said her attitude was that “no difficulty is insurmountable.” However, “I wouldn’t have made it without my parents’ support,” she said. “I don’t think any woman would have chosen to do it, but with help and support from parents and commanders, it’s possible – and I wouldn’t have succeeded otherwise.”


She began her military career as a lookout soldier in the Combat Intelligence Corps, and went on to become a company commander in the field. From there, she became an instructor at the IDF’s Combat Intelligence School, before serving as an advisor to the office of the chief of staff on Women’s’ Affairs.

In the meantime Major Oshrat Bachar is currently completing a course on command and special staff at Glilot, and will then go on to begin a battalion commander’s course in order to take command of Field Intelligence Battalion 727, otherwise known as Eitam, stationed on the Israel-Egypt border.

The relatively young Eitam battalion has become instrumental in IDF Southern Command’s Division 80’s efforts to keep up with the ever-changing security situation in Sinai after the fall of the Mubarak regime – and the entry of terrorist elements to the region.

Major Oshrat also served in the past as the head of the field intelligence spotter training course, as well as the chief of general staff’s adviser on women’s issues.

Oshrat and her husband, Maj. Ohad Bachar, a fellow career officer who serves in the Engineer Corps and shares her military ambitions, primarily share a greater treasure: the two have a 7-year-old daughter, who prides herself in having two majors for parents!

Maj. Ohad Bachar told an army publication in recent days that they both had shared the goal of becoming battalion commanders, and praised his wife for “realizing her ambitions and making a breakthrough as the first woman in the role.”

In the present unsettling conditions in Egypt, it is doubly remarkable that a woman, a young mother, was chosen to command the combat unit on the Egyptian border. Major Oshrat’s promotion is seen as a sign of the respect and appreciation she commands from her superiors and subordinates. A fellow officer, who called her a “fighter,” concluded that her appointment is “an outstanding achievement for the IDF and the field intelligence corps.” 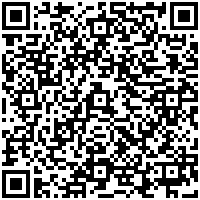