Frederick Terna has a soft touch. His images are neither strident nor angry. The horror behind many of them is paradoxically softened by symbols and metaphors. He is not an illustrator; indeed much of his work over the last sixty years is abstract. Yet there is nothing abstract about the journey Frederick Terna has taken from April 1945 until today. He has lived through one of the defining events of the 20th century, managed to survive and make art.

The exhibition, “From Darkness to Light, Please Touch” contains but 14 paintings, all but two acrylic on canvas. They chart one strand in his long artistic life, beginning with meditations on the concentration camps he occupied as a prisoner between 1941 until liberation in April 1945. Predictably dark and brooding, the early paintings are sonatas in black, deep blue and crimson, while the later work is filled with blazing light. The very darkness of the earlier images forces the viewer to examine closely and intently, in order to make out the subtle distinctions and quiet symbols that lurk on the dense surface. The effort is richly rewarded.

“Face to Face” is a maze of red arcs creeping up the vertical canvas, suspended over two hazy images in the lower part of the painting. At first the central image is but a motley pattern of deep blue, black and gray. Then emerges the head of a ram, facing us as a kind of fundamental symbol, inextricably referring to the Akeidah. Looking on from the lower left is a head of a bearded old man enveloped in the shadows. This image of Abraham (or is it Isaac?) is also illusory. On closer inspection, his face is an artful illusion created by three wispy gray feathers. Terna sees the arcs above them as holy sefirot, but here, heavenly spheres have gone dark and dangerous, as they hover. So too, the illusion of the feathers that make up the man’s head. For Terna, they represent the feathers of the beds ripped open by marauding Cossacks, pillaging a shtetl. There is nothing innocent in these meditations.

In “Neither Place Nor Name” the symbolism gives way to seemingly concrete depictions. A masonry structure is seen from below, two gaping doors giving the impression of a death head perched on a craggy cliff. The dark lunar landscape is actually composed of crude buildings that make up the death city of Terezen. In the upper left, walls seem to be aflame; a squat chimney outlined against the fiery horizon completes the description. Yet Terna’s painting is not descriptive. It operates entirely in metaphor, the shapes and limited colors only referring to a sense of the hardness of the buildings of the camp. Other artists have depicted the architecture of Terezen, its familiar courtyards and alleys. Underlying each image is the incredible hardness and coldness of a town turned into a ghetto and finally a transit point on the way to Auschwitz. The tilted hardness of his image, angular and forbidding, reflects his own experiences there.

Terna does not document what occurred to him in the Holocaust. He was born in Vienna, lived in Prague until he was interred in 1941. From then until 1945, he survived in a number of camps, including Theresienstadt, Auschwitz and a sub-camp of Dachau, Kaufering. He was liberated at age 22 by the U.S. Army. Self described as one of the “walking skeletons,” he was hospitalized for months in Prague until he realized that the coming Communist takeover was just as inimical to him as the Nazis. He went to Paris, studied art and worked on helping get Jews out of Europe to Palestine. In 1952 he arrived in New York and launched a successful career as an artist and lecturer.

His works are in the Smithsonian, the Albertina in Vienna, the Ghetto Fighters Museum and Yad Vashem. His artwork has been as varied as the many pursuits of his life. He does Biblical subjects, imaginary landscapes, symbolic Jewish paintings and a series of paintings on the Third Temple. His creativity is not limited to works that evoke the Shoah. Nonetheless, the influence of his youth is pervasive.

In what may be one of the most haunting of works shown here, “Logos II” is deceptively simple. Along the top of the vertical painting, a chimney is belching flames. Ominous dark shapes line the short horizon, each punctuated by slashes of red. An open yard seems to seethe with lines of molten earth, until it reaches two sets of horizontal shapes, neatly stacked, each delineated with the same viscous red. While Terna maintains these shapes are the fiendishly ordered barracks of the death camps, an alternative skeletal image is unmistakable. It is as if the entire camp has become one bleeding and lacerated body. It speaks to not only what happened to the Jews of Europe, but equally what had become of European civilization.

But the narrative focus of the exhibition is to trace from darkness to light, and so it does. The remainder of the paintings are indeed light, with yellows, whites and light blues dominant. A Jacob’s ladder is imagined in “Ascending and Descending”, while abstracts, sensually impastoed, seem to point to a present that is liberated from the past, hopeful of the warmth of sun and soaring vision. “Unto the Plain of Mamre” imagines a bucolic Israel, green with vegetation and groves of lush trees that shelter a group of figures, perhaps even the initial camp of Abraham and his family. A pair of imagined landscapes are painted over a bony surface of canvas. The image evokes open fields, layered in rows of brown, ochre, blue and light earth, over a terribly uneven ground. For Terna, they refer to the horrible past in which masses of bodies were partially buried in the shallow, frozen ground. These bright images are the opposite of the negative past, a somehow positive but engraved field.

The positive, of course, must prevail – and it does – in the iconic design on canvas for a Torah curtain, “Tablets for Time.” Finally, in this painting, the visceral is liberated from corporeal frailty of evil; light glows from an interior beauty and the future is envisioned in the ancient surety of yiddishkeit. Two rounded tablets form a visionary base for the seven branched menorah of the Temple, supported by the 12 bejeweled, Choshen Mishpat of Aaron HaCohen. The swirling whites and blues infuse the painting with a hope and faith that is essential to fuel an artist’s vision, thus enabling Terna to get up day after day, enter the studio and make art -again and again – that defeats the evil that was done to him so many years ago. 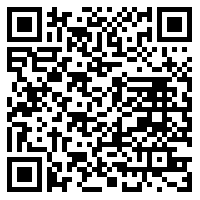