According to popular misconceptions, the left will always tell you there is hope for tomorrow and the right will always tell you that peace is un-achievable. The left will tell you that Israelis just have to be more accepting, more able to see the good in every human being; and the right will say that all Arabs are our enemy…Every. Single. Damn. One. Of. Them. These are the words of people who do not understand left, center, or right.

Ironically, the majority of people who have daily interactions with Arabs…are right wing. We live next to them, among them, not in some tower in Tel Aviv perched on high as a few Arabs sweep the streets below. We ride the same trains, wait at the same bus stops. By interactions, I mean discussions, comments, etc.


I was recently told by a woman that I am a target but she is not. I’m a target because I live in Maale Adumim, and she lives in Raanana. Obviously, she said this a few weeks ago, before two terrorists chose her city to make the point that she is as much a target as I am; that they do not differentiate between those who live here versus those who live there.

We are right wing. We are not stupid. We are not filled with hatred. We are not, as my college friend (now a big thinker in a think tank in Washington from which he tells us of maps and solutions that will bring the peace he envisions for us), said a few years ago, living in “limbo.” We lead productive lives, filled with family and friends, work, social events and more. My city has a museum, a Cultural Center, a Music Conservatory and a Country Club. Bowling alley. Schools. Emergency Medical Care Center. In short, we are simply Israelis. On average, we are as educated, as intelligent, as honorable, as peace-loving as those who live anywhere else in this country.

Many months ago, a left/center wing writer attempted to portray left, right and center. Conveniently slanting each article so that his view would seem logic while everyone else would seem illogical, hysterical, uninformed. I protested that he had no right to speak for me and mine and so I won’t make the same mistake. I will try my best not to tell you about the left and the center but to focus, from this point onward at least, to tell you about the right.

For the last few days, friends on the left have said things that I would never say aloud; things they would be shocked to hear were said over 30 years ago by Rabbi Meir Kahane, a man they would quickly and decisively label as an extremist, a racist. Wouldn’t they be shocked to know they were echoing his words and sentiments?

I remained, for the most part, silent. The Palestinians are making my point better than I ever could. I will leave the left to struggle for a balance between their many attempts to bridge Arab-to-Israeli gaps with today’s reality. Instead, I want to tell you about the right. We may have settled in a place to the east, north, or south of Jerusalem rather than the west but we are no less human, no less desiring peace for our families and country than anyone else.

We too dream of a day when our children won’t be soldiers; when we won’t need or be reassured by the presence of armed security forces in the streets of our cities. And more, we are working for that reality on the ground every day.

We all want to get to the same “end” – a land where 13 year old boys ride bicycles and come home safely at the end of the day rather than raise knives and stab people; where 15 year old girls giggle with their friends and complain about their hair, rather than attempt to infiltrate and murder innocent people in their homes. Where mothers are not taken from their four children and fathers don’t die defending their families; where people can go into a mall, and not find themselves under attack.

The difference between left, right and center is not the goal, but the path we must take to get to that bright future, and perhaps, who will be sharing this country when we get there.

We know the Arab leadership is intentionally stirring others up, increasing the rhetoric and the hate. We also know that those in the Arab community who know that we want peace and quiet and want it just as much as we do. There are those in the Arab community who are condemning the violence and reaching out to stop it. The problem, as always is proportionality. How many Arabs are condemning these attacks…how many similar attacks are being perpetrated against Arabs by Jews? How many Arab leaders have condemned the violence and demanded that it stop? And more, how many have examined their own community to understand why 13-year-old Arab boys and 15-year-old Arab girls are going out trying to murder Jews?

When we are at war with Gaza, the world demanded that we be proportional – our missiles would have to miss just like theirs; our soldiers have to fail, just as theirs so often did. In the world’s misguided view, a dead Hamas gunman killed in the midst of a gun battle was equal to an Israeli child murdered by a mortar while in his home. One for one – the world did not differentiate.

And now, when our people are being stabbed in the streets, the world is still blind. An injured 13 year old Arab is a victim as much as the 13 year old boy stabbed by that Arab boy. Worse, Mahmoud Abbas lies and says we murdered a 13-year-old Arab child in cold blood, while that very child is in an Israeli hospital in far better condition than the Jewish child he tried to murder.

The painful reality for the left is that our friends in the Arab community will do nothing to bring Abbas down; in fact, they will do all they can to protect and promote him because their lives are at risk if they do anything else. We on the right see that and so we are not crippled and without hope when we hear them praise Hamas and Fatah.

So, to my friends in the center and left – you are mistaken if you think we don’t want peace every bit as much as you…and perhaps more, as we are the ones on the front lines. Don’t think we hate all Arabs – we don’t. And definitely don’t think that you understand them better than we do.

The big difference between us is not what we want but what we dream of. You dream of a world that can never exist and mourn that it isn’t here already. We dream of molding this reality into a better one.

And more, we think your dreams weaken us and open us to the attacks we have been experiencing for the past few weeks. Secretly and not even secretly, we desperately wish you WERE right, that your WAY could succeed. But when we see the depth of their hatred, when we see them poison their own children as they try to kill ours…we lose hope that your dreams of the future can even be realized.

We want you to stop because when they hear you speak, they believe we can be defeated. We can’t be…we won’t be…and the one thing I can offer you on the left is that it isn’t so much that you are wrong…as that you are wrong about it now. There will come a day when I will stand beside you and work as hard for peace and believe in it every bit as much as you do…because when that day comes, the one major difference between then and now is that we will have a partner; we will have people who want peace as desperately as we do because they want their children to live…

Till then, yes, the left is shifting to the right…and the right is welcoming them because whether you are on the left or the right – we are one people.

We have hope for tomorrow, and all our tomorrows. For now, we dream and hope for security – basic safety so that our children can go to school; that we can go shopping and go to work in safety. We want to walk in the streets without fearing a knife in our back or a car coming towards us as we wait for a bus.

Till that time in the future, when the Arabs understand that they have no option to accept that we are here and always will be, that talking must be done rather than attacking, till that time…each time there is another wave of these senseless violent attacks. The left shifts towards the right…and the right welcomes them because whether you are on the left or the right – we are one people. 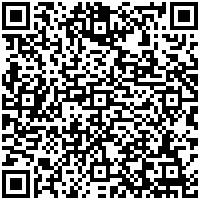