A few weeks ago an anti-Israel group called the Balfour Apology Campaign started an official petition to the British Government demanding that they apologize for issuing the Balfour Declaration in 1917:

We call on Her Majesty’s Government to openly apologise to the Palestinian people for issuing the Balfour Declaration. The colonial policy of Britain between 1917-1948 led to mass displacement of the Palestinian nation.

HMG should recognise its role during the Mandate and now must lead attempts to reach a solution that ensures justice for the Palestinian people.


Calls to apologize for Balfour have been spreading since the 99th anniversary of the document, and even Mahmoud Abbas has been publicly insisting on an apology.

After some 13,000 signatures were received, the British Government responded with a resounding no:

The Balfour Declaration is an historic statement for which HMG does not intend to apologise. We are proud of our role in creating the State of Israel. The task now is to encourage moves towards peace.

The Declaration was written in a world of competing imperial powers, in the midst of the First World War and in the twilight of the Ottoman Empire. In that context, establishing a homeland for the Jewish people in the land to which they had such strong historical and religious ties was the right and moral thing to do, particularly against the background of centuries of persecution. Of course, a full assessment of the Declaration and what followed from it can only be made by historians.

Unfortunately, the response turns politically correct at this point.

Much has happened since 1917. We recognise that the Declaration should have called for the protection of political rights of the non-Jewish communities in Palestine, particularly their right to self-determination.

At the time there was next to no desire by Arabs in Palestine for an independent state – their leaders overwhelmingly wanted to be part of Greater Syria. The idea of a people called “Palestinian” was literally unheard of.

However, the important thing now is to look forward and establish security and justice for both Israelis and Palestinians through a lasting peace. We believe the best way to achieve this is through a two-state solution: a negotiated settlement that leads to a safe and secure Israel living alongside a viable and sovereign Palestinian state, based on the 1967 borders with agreed land swaps, Jerusalem as the shared capital of both states, and a just, fair, agreed and realistic settlement for refugees.

We believe that such negotiations will only succeed when they are conducted between Israelis and Palestinians, but with appropriate support from the international community. We remain in close consultation with both sides and international partners to encourage meaningful bilateral negotiations. We do not underestimate the challenges, but if both parties show bold leadership, peace is possible. The UK is ready to do all it can to support this goal.

If they think that their “even handed” response will take the wind out of the sails of the haters who created the petition, they are sadly mistaken. The haters don’t want a Palestinian state alongside Israel, they want an Arab state replacing Israel.

Which has been their goal since Palestinian nationalism started.

It is nice to see that Her Majesty’s Government did not even consider the petition to have any merit to begin with. There was no apology for not apologizing. The rest is well-known British policy, and the only way that this policy will change is when the world governments start looking at things clearly and seeing that these moves are not meant to foster peace but to deny self-determination to the Jewish people. 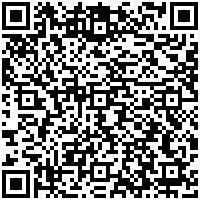