Recently, the New York Times published an op-ed by a resident of Gaza, Basma Ghalayini, who wanted to tell the world that it wasn’t only Hamas that was fighting Israel, but all Palestinians. And they have every right to use terrorism:

[T]o focus on Hamas is to miss the point, and to reinforce the myth that the conflict is, in some fundamental manner, about the group. The conflict is about the Israeli occupation.
To focus on Hamas is also to sanitize the conflict, and in that way become complicit in it. It allows people to express sympathy for ordinary Palestinians while blaming a few people at the top of the Palestinian leadership. But the right to self-defense against Israel’s continued aggression belongs to all Palestinians; legitimate resistance cannot be a right only for those Palestinians who believe exclusively in nonviolent self-defense — not in the face of the violence we endure. We, Palestinians, are in this together.

She also said that Hamas’ thousands of rockets were “rickety” and no threat to Israel, only an excuse for Israel to attack Gaza.

This is justification not only for shooting rockets at Israelis, but also to do literally anything. Using this logic, it could be “legitimate resistance” to rape Israeli women or to kidnap and butcher Israeli children (both of which have happened.)
Palestinians can and have done anything under the banner of “legitimate resistance” from bus bombs to car rammings to stabbing any Jews that can be found. The New York Times is agreeing that this is a legitimate viewpoint worthy of debate and consideration.
And anyone who thinks that there is no relationship between this vile mentality and the scenes we’ve seen of Palestinian youth attacking and targeting Jews in Western cities is a fool.
Today, the NYT published another anti-Israel op-ed, by Diana Buttu, that justifies the recent pogroms against Jews by Israeli Arabs as a natural reaction to being second-class citizens, and says that coexistence is a “myth.” That point could be argued.
But the graphic for this article is thoroughly offensive – it is a version of “The Map That Lies,” the graphic that misrepresents Jewish and Arab control of land since the 1940s, commissioned by the New York Times! 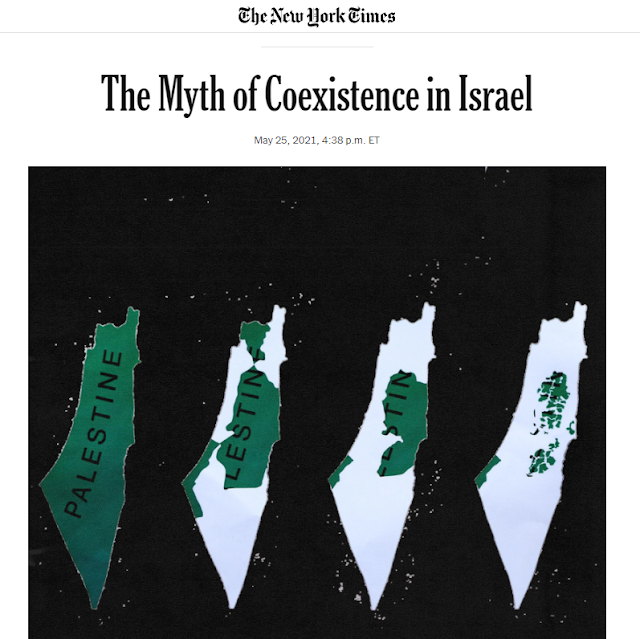 MSNBC apologized for displaying this fake map on the screen. McGraw-Hill apologized for publishing it in a textbook – and withdrew the book from circulation.  But years after it has been thoroughly debunked by many, the New York Times not only publishes it – but makes its own custom version!
This is unconscionable. The New York Times op-ed page is a cesspool of lies and slander against Israel where facts are demeaned and perversions are celebrated.
Advertisement


{Reposted from the Elder of Ziyon blog}