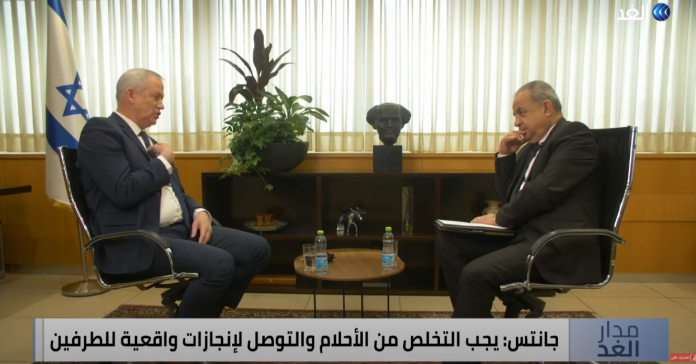 What he said wasn’t as important as the fact that the interview happened at all.
Palestinian factions have denounced the interview, calling it “illegal” and “normalization.”
Islamic Jihad said in a press statement, “Hosting the occupation ministers or any Zionist figures on the Arab media is unacceptable, condemned and unacceptable, whatever the justifications.”
The Palestinian Journalist Bloc considered this “a dangerous moral slip, and a blatant encroachment on our Palestinian people, the peoples of our nation, and the world’s free people.” and called for all Arab media to abide by the decisions of the Arab Journalists Union “to fight media normalization with the occupation and its institutions, as it carries a danger to our people and their rights..” It called for an apology.
The Union of Arab Journalists called for rejecting this “unacceptable normalization act with no justification,” stressing that it disregards the sacrifices of our Palestinian people and contributes to beautifying Israel’s image before the world at the expense of the suffering of the Palestinian people and their just cause.
The Democratic Press Association expressed its rejection of this “blatant normalizing participation on the Al-Ghad TV screen.”
The government media office in Gaza  also condemned Al-Ghad TV, saying “Gantz had stained his hands with the blood of our Palestinian people” and said that “such hosting of figures from the occupation state goes beyond the professional and national Arab dimension, which affects the feelings of millions of supporters of the Palestinian cause.”
The Palestinian Media Group emphasized its rejection and strong condemnation of the Al-Ghad Al-Arabi channel, “which indicates the submission to which some Arab media outlets have reached, which insist on walking in the orbit of treacherous normalization of the just Palestinian cause.”
The condemnations were so widespread that Al Ghad al-Arabi issued a statement on Monday night during its broadcast, saying that  it is an independent and neutral Arab channel that deals with Arab and Palestinian affairs and it intends to continue its professional mission and its commitment to the usual professional rules in media work.
The fact that it didn’t apologize is almost as a big a deal as doing the interview to begin with. It shows that even Palestinian solidarity in matters like this is cracking.
Advertisement